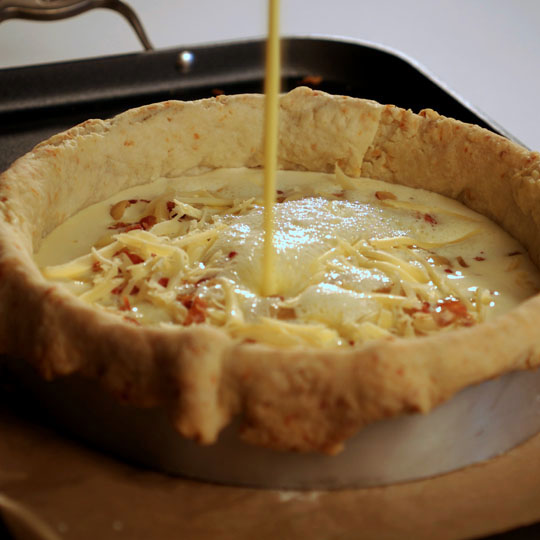 Quiche is, as Thomas Keller called it, "the sexiest pie." Photo by Donna Turner Ruhlman.

I've been in LA on an entertainment project and to see the opening of my friend and collaborator Richard LaGravenese's new movie Beautiful Creatures. I'd never been to an opening before. But quiche has been on my mind, so I've been using travel time to work on some variations of this infinitely variable fat custard tart. If I had time I'd head to Bouchon in Beverly Hills, which makes perfect quiche. Bouchon, and working on that book, is where I learned that, while America was taught to make quiche in premade pie shells, this deprives the quiche of its true greatness: depth. In order to achieve that voluptuous texture, it has be about two inches thick. For this, you need to have a ring. When I told this to my partner in tools, Mac Dalton, he said, I can make that! I said great. And so we did.

The recipe here is for my favorite quiche, simply bacon and onion enriched with delicious cheese. I made it for Kai Ryssdal when he interviewed me about my book Ratio.

Because I found myself writing about quiche on the CLE-to-LAX flight, I thought I'd post on it here, this simple but extraordinary creation, what Thomas Keller described as "the sexiest pie."

Trimming the crust off the quiche ring.

To make the crust:

To make the quiche:

* Lardons are batons of bacon and can be as thick as ½-inch square. Smaller lardons are best here, but a pound of thick-cut bacon sliced into strips is also acceptable. 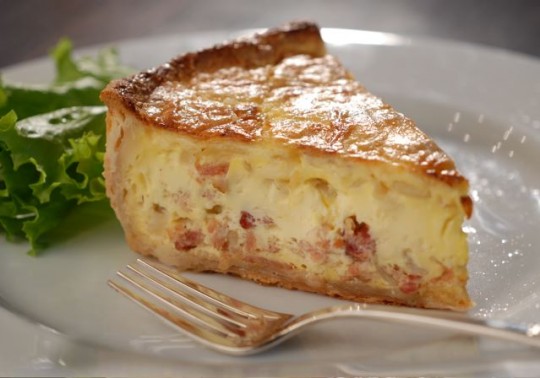 This is the quiche "money shot".