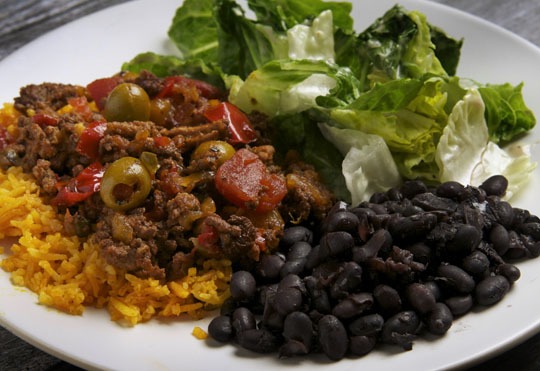 I followed a recipe for the first time in ages to make something I'd never cooked before. Whilst down in Key West, I decided to cook a local or near-local preparation. I once said to my friend Nathan Sheffield, Esq., "There's no such thing as good Cuban food." He was justifiably riled and sent me the below recipe for picadillo, a Latin American stew of chopped meat. Nathan is of Cuban heritage and thus his picadillo has lots of cumin and umami-giving olives and capers.

Nathan insists that it be eaten with yellow rice, rice flavored with annatto oil. Annatto seeds are simmered in oil to make a red-orange oil that has a flavor like no other—difficult to describe but in the cinnamon range with bitterness rather than sweetness. It's the defining seasoning here. 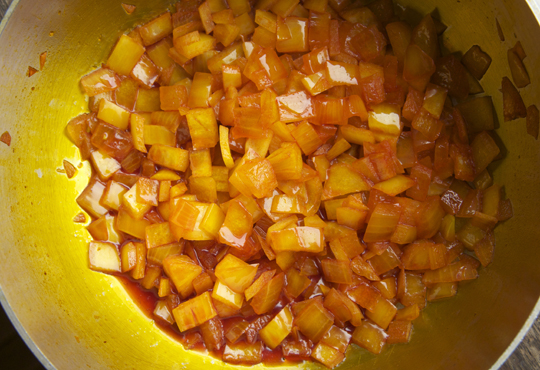 Then add rice and water or stock and cook. The same method can be used for black beans, though I used bacon and onions yesterday. I make a big batch of annato oil by sight, combining plenty of seeds with about three times the amount of oil. Or you can follow the recipe here, but double it for the yellow rice. It will keep for a few weeks refrigerated. Nathan uses potatoes; this is starch overkill and I recommend you don't. Nathan says you must put a layer of your favorite hot sauce between the rice and the stew, a conviction with which I concur enthusiastically. "There's something about the alchemy of the hot sauce being under the stew that makes it bloom in a magical way," Nathan says.

The following batch (with rice and beans) fed six people with leftovers. This is a great meal to make for a Sunday dinner and to have leftovers later in the week. Serve it as a taco filling with cheese on top if you wish or on more rice. It's fabulous.