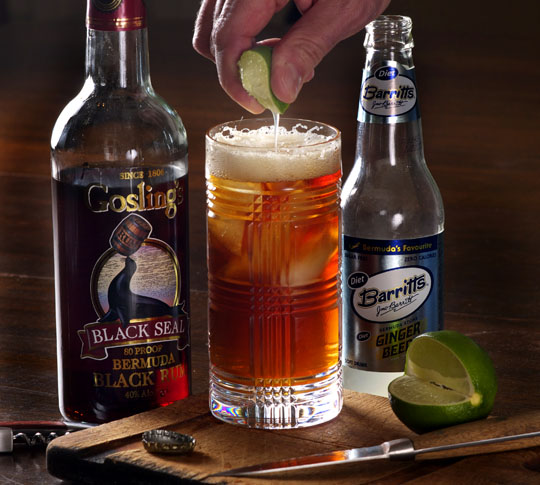 Another classic, the Dark & Stormy. Photo by Donna Turner Ruhlman

I've been traveling and hobnobbing with entertainment industry folks this week, so work and body clock are all off. Now I'm back in the deep Cleveland gray and longing for the fine days of cooking in Key West, so I'm reposting this most excellent cocktail that started off all those long lovely boozy nights in the southernmost with my sailing family, the Dark & Stormy: Gosling's rum, ginger beer, and lime. I like equal parts rum and ginger beer, because that's me; the traditional ratio is 2:1 beer to rum. This time I'd like to stress the use of lime. There should be plenty in the perfect Dark & Stormy or the drink is cloying after the first sip or two. Don't give a desultory squeeze but rather an aggressive one, as much as half a lime depending on the lime, always to taste. Just remember the lime is every bit as important as the rum and ginger beer, not an afterthought.

This cocktail is recommended especially to all my friends on the east coast from Virginia (hammered with rain) up through New York and Boston, where it's going to be dark and stormy, blanketed, cold, and gray gray gray. Chase those grays away with a couple of Dark & Stormys at home and then stay home, make a deep rich stew or, better, roast a chicken and stay warm!

Last week's cocktail post, The Moscow Mule, allowed me to show off OYO, the awesome Columbus, Ohio, vodka by Middle West Spirits, but it also got me thinking about how cool ginger beer is. It also demonstrates how specific drinks are defined by the spirit used. The Manhattan, made with American whiskey, becomes a Rob Roy when made with scotch (not a "scotch Manhattan"). A Martini made with vodka becomes a Kangaroo (not a "vodka martini"). Swap out the vodka in a Moscow Mule and you don't have a "rum Moscow Mule," you have a Dark and Stormy. (I don't know if this is an official cocktail, but it's great from a taste standpoint, noted by a commenter: make a Dark and Stormy with Maker's Mark instead of rum and you have a "Mark and Stormy.")

A couple side notes: last week we drank Fentimans ginger beer. It was delicious and is what I'd choose. But our store was out so Donna got Barritt's (diet, no less, yikes!), which originated in Bermuda, and so is appropriate for this rum (even the diet part—it tasted good). And an observation on limes: choose the ones with the smoothest, shiniest skins: less skin, more juice.

The Dark and Stormy is a most excellent warm-weather drink. It's the drink of choice when I go down to Key West to write and to cook for the boys (and girl) who race in the January regattas there. This one has a goodly quantity of rum. If you're like the boys on the boat, it's a nice start.