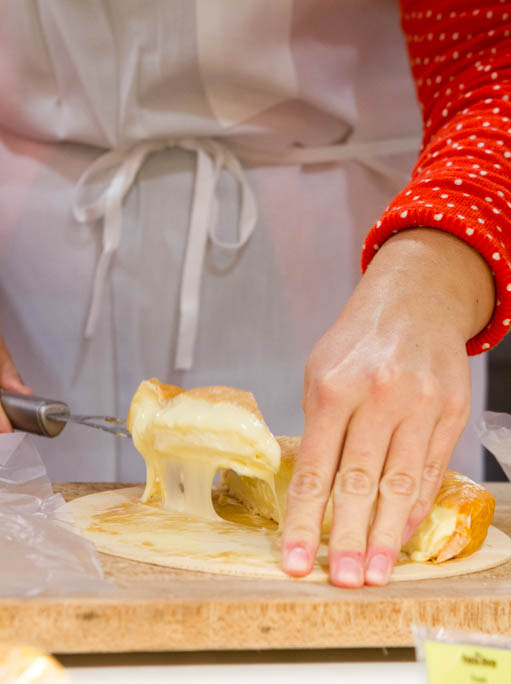 Stephanie Stiavetti (@sstiavetti) writes The Culinary Life blog. Her first book, Melt: The Art of Macaroni and Cheese, will be published next year by Little, Brown.

If you're a regular reader of Michael's site, then you're probably one of a class of people that thinks a lot about food. You might make it a point to buy quality ingredients, mostly prepare your meals at home, and generally spend a fair amount of time thinking about what you put in your body. What baffles me, though, is that despite all the grass-fed beef and produce carefully selected at the local farmers' market, a huge number of the people in this food-conscious demographic still buy crappy, industrially produced cheese. These folks have educated themselves about many other aspects of what they eat, but are seemingly unaware that these cheeses are on par with the same processed foods they spend so much money and energy avoiding.

Then there's an interesting class of in-betweens, somewhat cheese-savvy individuals who consciously go out of their way to buy specialty cheeses for a cheese plate, but when it comes to the cheese they're putting on a burger, in a casserole, or on top of their pasta, they still reach for the dairy equivalent of a Pop Tart. Pisses me off. And it's a big part of why I wrote a whole book dedicated to cooking with "real" cheese (with friend and fellow writer Garrett McCord, out from Little, Brown this fall).

Why is it that the quality and origin of one's cold cuts warrants so much critical thought, yet not nearly as much attention is paid to the cheese that's slapped on top of food before calling it dinner? If you notice a difference when you eat fresh, locally sourced meat and vegetables, I guarantee that you'll find a huge difference between high- and low-quality cheeses.

So listen up! School's in session. Today I'm going to give you a quick primer on basic cheese vocabulary. These terms will help you to become a better cheese buyer and, consequently, a healthier, more satisfied cheese eater.

There are many ways to classify cheeses, but some would argue that it's most important to properly categorize varieties by how they are produced. Cheeses generally fall into one of four production categories: industrially produced, specialty, artisan, and farmstead. How can a novice cheese buyer tell the difference between a mass-produced cheese and a farmstead cheese? Here's how:

Industrially produced cheeses are made in large factories, often employing huge teams of workers to create the cheese. The milk comes from any number of places, including factory farming operations. The taste and texture of industrially produced cheeses are usually very consistent from one package to the next. They come wrapped in sealed plastic, often pre-sliced or in huge blocks, and are sold prolifically across the country. These are the cheeses you'll find in the cheese aisle at your local Safeway, Kroger's, Costco, etc. Think brands like Kraft, Sargento, President, Laughing Cow, and generic grocery store cheeses.

Specialty cheeses are produced with less mechanization than industrially produced varieties, and are usually created in somewhat smaller amounts. Specialty cheese makers pay attention to flavor and texture profiles, keeping a relatively close eye on the cheeses they produce, though these cheeses are not considered "handmade." You can find specialty cheeses at regular grocery stores, where they're often a little pricier than their mass-produced counterparts. Specialty cheeses are a good intersection between quality and ready availability—brands such as Kerrygold, Beemster, Parrano, and Cabot Cheese Co-op. for example.

Artisan cheeses are handmade in small batches, often by just one or a small handful of passionate individuals who pay close attention to the tradition of the cheesemaker's art. Artisan dairies employ as little mechanization as possible, adhering to more traditional methods (while working within the limitations of health and sanitation laws). You can usually find these cheeses at small local cheese shops manned by knowledgeable cheese staff. While artisan cheeses are not usually found in the huge cheese aisle at the supermarket, many big grocery chains are implementing cheese counters with a trained cheese person standing by. Brands to look for: Cowgirl Creamery, Vermont Creamery, Coach Farms, Laura Chenel, and Cypress Grove.

While it may appear that some cheeses are created on an industrial scale, in reality they may be the combined intimate efforts of many farmers working together to create very consistent results. Take Gruyère, for example. Because of its protected origin designation, only cheese made in a very specific region of Switzerland can be called Gruyère, but there's not just one enormous factory creating all the Gruyère that exists in the world. Many smaller dairy farms within the region work together to help produce the cheese, all of them adhering to the same specific requirements for a uniform product. If you're curious about the original of your specific wedge of Gruyère (or any other protected cheese, such as Emmentaler, Parmigiano Reggiano, etc.), feel free to ask the staff of your local cheese shop who made, aged, and distributed the cheese you're buying.

Other popular kinds of cheeses, such as brie, are not protected by any sort of designation, and therefore may be made on any scale without any sort of specified quality control. This means that while officially titled Gruyère will be fairly consistent, it is not necessarily the case for brie. Artisan brie can be amazing. Mass-produced brie that you find for $3 at Walmart tastes vaguely of salted pressboard and packing peanuts. Same goes for camembert, cheddar, "Swiss" cheese, and others. (Fun fact: Swiss cheese doesn't really exist as a type of cheese. It's the generic name for Emmentaler-like cheese produced outside the designation.)

It's also worth noting that not all large-production cheese tastes like crap. Some big-name brands manufacture cheese at a dizzying rate while still maintaining high standards of quality. Two such examples are Tillamook and Black Diamond, both of which create very good cheddars and are available in huge grocery store chains. But the point of this post is to show the merits of selecting specialty and artisan cheeses over their factory-generated cousins, and I make it a point to select small-production cheeses because I prioritize independent producers, non-factory-farmed ingredients, and artisan-level quality. Huzzah!

How Do You Find Out?

Learning about the cheese you eat is no different than learning about the meat you're buying. Do some research. Your best source for cheese information is a staff person at your local cheese counter. A good cheesemonger is well trained in the way of the milk and can answer your questions about the origin, content, and quality of the cheeses they stock. Given the growing popularity of handmade cheese, many large-scale supermarkets are outfitting their locations with well-stocked cheese counters. Even if your regular grocery store doesn't have a cheese counter, you can probably find at least a few specialty brands in the cheese aisle. If all else fails, look to online cheese vendors such as Murray's or Artisanal.

Quality cheeses are more expensive than their processed counterparts, as is most of the food you put in your mouth. I'm continuously hearing the complaint that good cheese is too pricey, yet these same people plunk down $10 for a dozen organic, free-range eggs. News flash: you're digesting it all, and it all needs to be high-quality. Crappy cheese is just as bad for you as any other crappy food.

Sure, there's the argument for eating low-fat foods, and a huge number of Americans still buy fat-free cheeses, which are generally not available from anywhere but industrial brands. Cheese is composed primarily of fat. Fat-free cheese isn't really cheese. But much like the stance Michael has taken on salt—that if you don't glut yourself on sodium-laden processed food, you don't have to worry a whole lot about the salt you use to season your homemade dishes—I take a similar position on fat. If you cut out processed high-fat foods, the fat you consume from a moderate amount of real cheese isn't going to hurt you. In fact, there's a whole cookbook dedicated to the idea of fat as a healthy, necessary part of your diet.

If you're interested in learning more about cheese and where it comes from, there are a few awesome books on the topic: