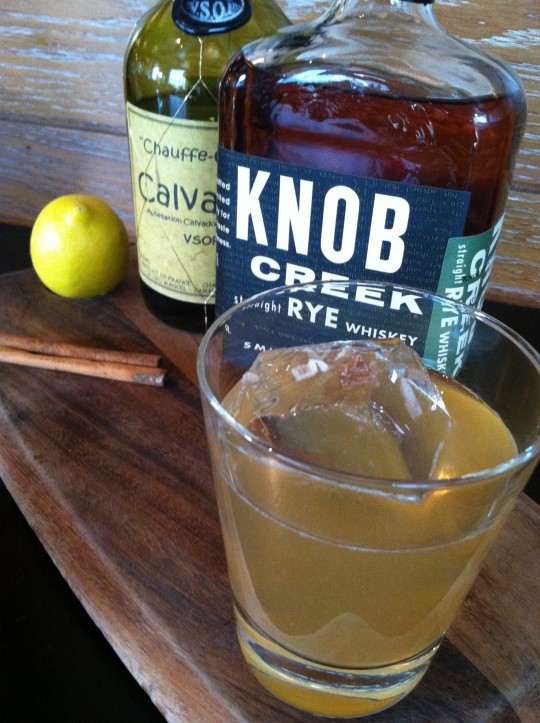 Every now and then a request to guest post comes in and while I don't always accept them, the following cocktail from Jamie MacBain, head bartender at Bourbon Steak DC, so intrigued me I decided it merited a post for The Hour. This cocktail is tart, spicy, savory—perfect for a winter evening. I've add some of my own notes after the recipe. I especially liked Jamie's thought process in the naming of this new cocktail.—M.R.

I’m a bit of a Calvados connoisseur and I wanted to incorporate it into a cocktail for the fall and winter seasons. We tried this new Calvados Chauffe Coeur VSOP that had lots of baked apple and caramel notes to it. Often Calvados doesn't have enough apple or baked apple pie components, but this one had such distinctive flavors I wanted to make a drink that wasn’t over-the-top sweet but showcased that strong apple component. So I started playing with rye, another favorite of mine, to pair with the Calvados and I realized I needed a higher proof to make the cocktail work. 100 proof or more really cuts through the sweetness and elevates the baking spice inherent in Calvados.

To further accentuate those flavors I decided to use cinnamon syrup, since cinnamon and apples are a natural pairing. I added lemon juice for balance. And to give the drink a slightly savory quality, I added smoked sea salt. I’d been hoping to create a cocktail that incorporates salt, not just as a garnish but as an ingredient, and this drink had the perfect components for it.

Being a history major and researching names for this cocktail—which uses rye, the quintessential American spirit, and Calvados, a spirit from Normandy—I naturally thought of the Normandy D-Day invasion, which was codenamed Operation Neptune. With the incorporation of smoke through the smoked salt, the cocktail, for me, conjures images of that fateful day of June 6, 1944. As a final touch I add a large hand-hewn ice cube to mimic the cliffs the troops had to scale.

In case you can’t find Knob Creek rye, you can always use Rittenhouse rye or Wild Turkey 101. Really any rye that’s 100 proof or above will work for this drink. For the Calvados, instead of Chauffe Coeur VSOP, you can use Christian Drouin Calvados or any apple brandy with good apple flavor notes, like Clear Creek 8-year Apple Brandy. Just don’t use Applejack.

Cinnamon syrup is commonly used in a lot of tiki drinks like the classic Donga punch. At the restaurant we use cinnamon syrup in one of our nonalcoholic cocktails, where we add it to a mix of grapefruit juice and lemon juice and top it off with sparkling water. The syrup can also be drizzled on desserts like bread pudding or mixed with honey to add a pleasant spice to baklava.

Ruhlman's Notes: While Jamie has created the optimal cocktail with his choice of French apple brandy, I had none on hand. American applejack had to do. The Rye I had was Templeton (80 proof). Even with these compromises, the cocktail was superb. The syrup is gentle and elegant, but you might want to halve or even quarter the syrup amount, unless you want a liter of it. Also, I highly recommend toasting and lightly crushing the peppercorns before the infusion.

Happy Friday, all and thank you Jamie MacBain.