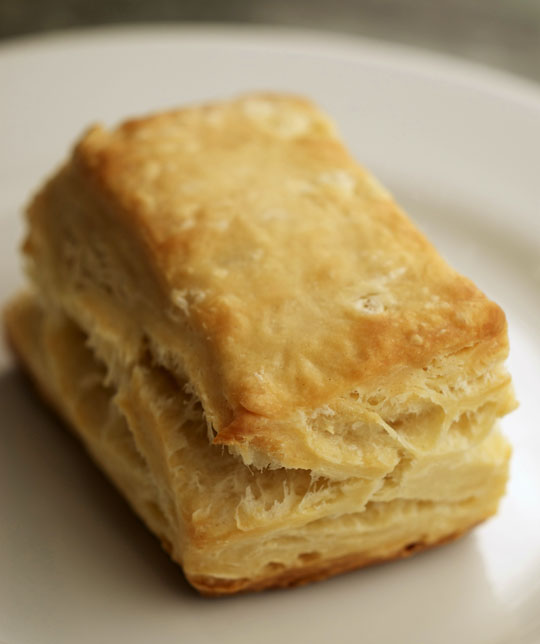 Nothing beats an oven-fresh biscuit. Photo by Donna Turner Ruhlman.

Ages ago a reader requested a biscuit post and now, in something of a dreary February brain hibernation, I thought would be the perfect time. Donna shot this biscuit while I was writing Ratio and what I love about it is not the ratio itself (3 parts flour : 1 part fat : 2 parts liquid) but rather how the rolling technique results in layered flakiness.

It's kind of a cross between a pie crust and puff pastry. A pie crust is flaky because random knots of butter separate layers of dough and puff when baked. With puff pastry, one sets out to create precise layers of dough and butter, hundreds of them, by successively folding and rolling out a single block of butter encased in dough (called turns) for a uniform puff dough. Here, we make a looser pie crust (compare the 3-2-1 pie dough ratio), purposefully allowing chunks of butter to spread out in the dough, then give the dough several "turns" to create multiple, though far from uniform, layers that puff when you bake them.

These buttery wonders are great for breakfasts and dinners, the dough made a day in advance if necessary, the biscuits baked and frozen for a week or more. For an amazing winter weekend breakfast, make a bechamel (cook butter and flour, add milk, heat till thick) then add sausage and onion to this and pour it over the biscuit for a classic biscuits and gravy breakfast.

Yield: 4 to 6 biscuits (can be doubled or tripled by weight)