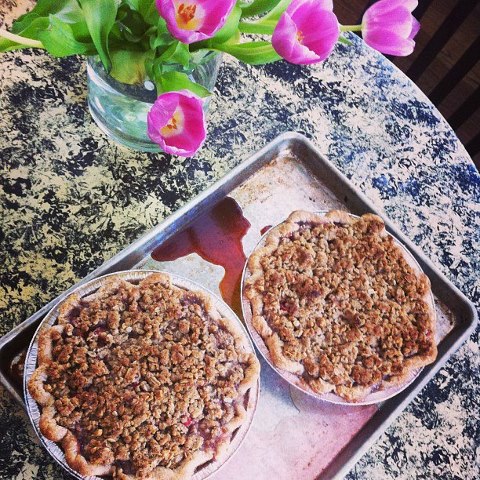 It's practically balmy here in Cleveland. With most of the snow melted I can't help but think of spring. Spring means rhubarb. So herewith a re-post from a Michigan baker, as I head down to warmer climes with the family.

Lisa Ludwinski is a baker and cook living in Detroit. She recently returned to the Great Lakes State after a six-year stint eating bagels, nannying, and mixing many pounds of cookie dough in Brooklyn, finishing with stints at Momofuku Milk Bar and Four and Twenty Blackbirds. Now she is the owner of Sister Pie, a from-scratch home bakery serving the Detroit area via the Facebook page, and aims to celebrate the seasons with pie and other sweets through unique interpretations and natural ingredients. For now, she's able to bake pies from home for sale under Michigan's Cottage Food Law, but her goal is to open a full-service breakfast/lunch/pie shop, which she is now in the process of doing.

Here she offers her take on one of my favorite pies. I like to make a lattice top (great pix in this post), which allows all of the moisture to escape efficiently (and I've reduced the pie crust ratio to 12-8-4 ounces of flour-butter-water), but a loose crumble allows for the same reduction; it's also a great all-purpose topping for any fruit dessert. Lisa thickens the cooked fruit with tapioca; cornstarch will also work. I wholeheartedly support her urging you to avoid using a strawberry-rhubarb mixture and feature the amazing rhubarb on its own.—MR

The first time I made strawberry-rhubarb pie, I went in blindly. It was four years ago, for an episode of my cooking show I produced in order to challenge myself to learn to cook, to bake, and, ultimately, to improvise. The fact that I had never tasted rhubarb or that I had only tried my hand at homemade pie crust maybe once or twice before simply came with the territory. The pie was a success, and as I shamelessly devoured piece after piece, I imagined future Mays and Junes, newly rhubarb-filled and happy.

Fast-forward to today, many crumbles, crisps, and cobblers later, and I adore that tart perennial more than ever. Now I sell pies for a living, so I’ve been dreaming up this particular rendition in eager anticipation for months. First things first: lose the strawberries! Rhubarb on its own has unmatched flavor and enough star quality to carry a pie to heavenly levels. Another important note, which you’ve undoubtedly heard before: take the time to make a crust from scratch—really! Your skills will improve each time you try, and your pie will turn pie-haters into pie-lovers and eventually pie-bakers. And what’s the worst that could happen? You piece together a crumbly mess of flour, butter, salt, and water and press it into a pie tin—it’s going to be delicious regardless of its appearance.

Enter Rhubarb Walnut Crumble pie: rhubarb is gently tamed with sugar, orange, and cinnamon and placed into a flaky, all-butter crust spiked with whole-wheat flour to highlight the nuttiness of the crumble topping, made from lightly toasted walnuts, browned butter, and oats. The intoxicating aroma of pie baking in your oven will make it hard to resist digging in immediately, but it’s worth the wait for it to cool. The filling will thicken as it cools, and while you wait you can whip up some cream to dollop on each slice. Do it by hand—you might as well learn two impressive skills today.

For the walnut crumble:

For the rhubarb filling:

Previous Post: « Medium-Well(Cooking with Your Senses)
Next Post: How to Make a Mushroom Sauce Without a Recipe »