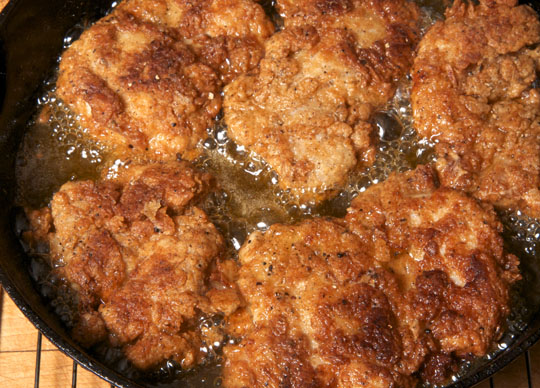 The latter should be your go-to chicken part. How and why chicken mongers can get away with selling the boneless, skinless chicken breast is beyond me. Then again, why anyone would buy skim milk is beyond me. I love bone-in, skin-on thighs but am delighted that the boned version is available as well. I recommend slicing it thinly for stir-fries, in chunks for chicken stews (curries, fricassee). It’s a well-worked muscle and therefore flavorful (and chewy); it’s also got some fat and is therefore juicy.

Not long ago my son James, chewing on a fried chicken drumstick, wondered if we couldn’t have boneless fried chicken, so that he could, I imagine, revel in the unalloyed pleasure of fried chicken—crispy flavorful exterior, succulent, chickeny interior.

So that’s what I made last night, mixing up a big batch of seasoned flour to keep in the freezer as needed (though you can simply use flour and pepper; see link for rosemary-brined chicken below for seasoned flour mix); I brined the thighs for a few hours in a rosemary brine (not essential, but I was home and had time); for the liquid, I whisked milk into Greek yogurt till I had a thick consistency (I don’t buy “buttermilk” anymore since it’s not really buttermilk).

And instead of deep-frying the chicken, which uses a lot of oil, I pan-fried them, using about a quarter inch of oil in a cast iron skillet. Ideally, with the pan-fry technique, you use just enough oil so that when the meat is in the pan, the oil comes exactly halfway up the sides of the meat. It’s a great technique for chicken, or anything breaded, such as pork chops. Below is the simplified version, though feel free to adapt the more in-depth rosemary-brined fried chicken here (which I first published in Ruhlman’s Twenty) to the boneless skinless thigh.

Chicken thighs, seasoned flour, thinned yogurt; at right, browned and ready to finish in the oven/photos by Donna Turner Ruhlman