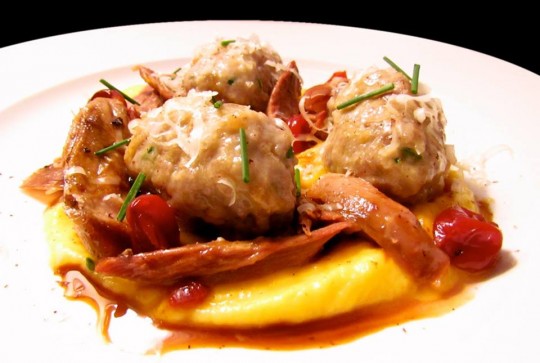 I'm in Traverse City, Michigan, at Pigstock 2013. Herewith, a guest post from Chef Erin Harris. Erin began her culinary adventure in her hometown of London, Ontario, where she started cooking in a local fine dining restaurant at the age of 16. Erin studied Culinary Arts at Fanshawe College, and continued her education at George Brown College, where she studied La Cucina Italiana. This diploma course took Erin to Italy for 6 months where she studied Etruscan-era cuisine in Tuscany, and regional specialties in Trentino-Alto Adige. Erin found her true love while in Europe: cheese. She now owns a small boutique cheese shop in a local farmers' market—The Cheese Poet—where she sells all of the best Canadian-made cheeses and charcuterie. Erin is also a sales consultant for a respected national wine agency, and teaches cooking classes in her free time. —MR

Trento, Italy, is situated at the base of the Dolomite mountains, near the Austrian and Swiss borders. In 2004, while completing a stage at Osteria a le Due Spade in Trento, I had the great fortune to learn about canederli, a regional specialty of Trentino-Alto Adige. Chef Federico Parolari introduced me to this regional Italian cuisine that shares many similarities with its neighbors to the north. These bread dumplings, also known as knödel, are nothing more than a use for day-old bread—but for me, nothing less than a beautiful memory of a place and time in my culinary journey. Canederli are excellent on their own, as a side dish to braised meats, or as part of a composed dish like the one pictured here with duck confit, butternut squash puree, picked sour cherries, and duck jus. This recipe for canederli calls for walnut levain, a rich walnut sourdough bread. I find the sourdough elevates the flavor profile of these dumplings, while the walnuts give them an enjoyable texture. The canederli are traditionally made with rustic Italian style country bread.