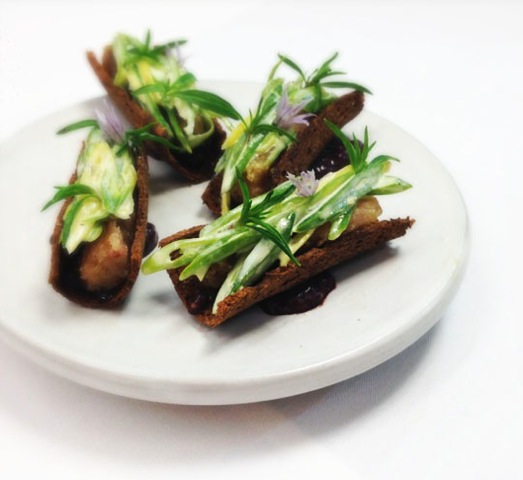 Donna and I arrived in New York last Tuesday to begin setting up our city outpost in the West Village, and we were struck anew by the extraordinary dining scene there. I plotted three very different theatrical performances, and they parallel the dynamism and diversity of the traditional, quirky, experimental food of NYC. I wonder if these traits cause coincidences. Last year I had a surprise encounter with my news mentor, Arthur Gelb, returning me to the Times, formative if unhappy years. This year we arrived in Times Square to have a pre-show cocktail at Sardi’s. We hadn’t been there a few minutes, and I don’t know what we’d said other than placing an order for a wine and a martini, but we’d struck up a conversation with a woman seated catty-corner to us. She said, “You have a good marriage. I can tell.”

She asked us what we were seeing and I told her Lucky Guy. This is the Nora Ephron play starring Tom Hanks, all about the newspapering world of the 1970s, '80s, and '90s, which I’d been an underling part of from 1985 to 1987. We stood to leave, and there at a table behind the marriage counselor was Jeanne Pinder, a long-time Times editor who was not only tough and smart (everyone there was), but was also one of the few people in the newsroom to compliment this miserable copyboy. She was having a drink with a long-time Times reporter and paragon of reporting. But again, as one year ago, to happen on my past just before entering a show about those days, seemed an omen. Jeanne told us that she left the Times to be CEO and founder of the site ClearHealthCosts.com, which aims to inform people such as myself what the colonoscopy that’s in my future should cost. But she misses the Times, and as she had a hand, on both foreign and city desks, in too many Pulitzer Prizes to list here, I know the paper is the lesser for her being gone. I felt lucky for the reunion.

DB Bistro was perfect after the show—cold corn soup, salad, ravioli. A place we were forced to return to the following day for lunch with my friend and a Conde Nast Traveler editor Peter Stevenson, who midwifed my cover story on Gascony for its annual food issue. Donna and I splurged on the lobster salad, each. What I love about Boulud's places is not so much the food (dependably excellent) as the service, which combines ease with refinement without calling attention to itself.

Wednesday had started hopefully, with a recording of a podcast about my upcoming book, The Book of Schmaltz, with David Leite, founder of Leite’s Culinaria, and its exec editor, Renee Schettler. And it would conclude wandering the long tree-lined West 4th Street to Fedora, where I very much wanted to eat after Megnut recommended it so highly. Though it was Wednesday night, the whole street throbbed with people as if it were Friday. It seemed there wasn’t an empty seat in the whole village. Or at least on West 4th, where there seems to be a restaurant every five feet. 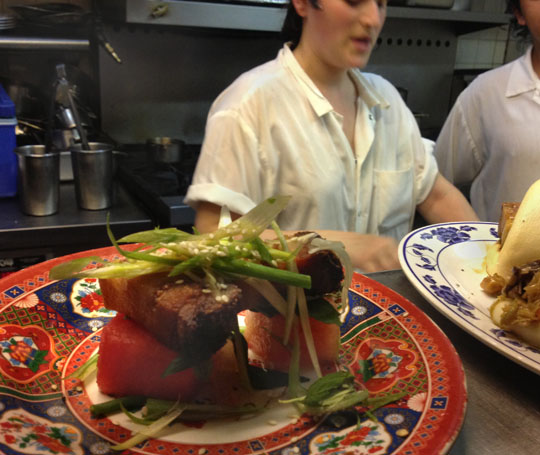 Pork belly and watermelon and steamed buns arrive at the pass at the Fatty Crab.

We headed back north and found two empty seats at the bar at the The Fatty Crab, where the bartender Julian was so friendly, he insisted we have the pork belly and watermelon and ordered it for us. Everything was fabulous, all the food hammered out by two young cooks working a closet-sized line—love seeing that. Then for a long walk along a stunning stretch of the Hudson River Greenway, once a collection of rotting piers, now a thriving public space.

Thursday our friend Annie got us a booth at the cabaret venue 54 Below beneath the old Studio 54 to see Sherie Rene Scott, who did a fabulous, languorous, voluptuous rendition of David Byrne’s "Life During Wartime" and concluded with a medley of “I Am an Animal,” fitting as she’d begun the comedic cabaret announcing that she had started eating meat again.

Annie asked me to find a place nearby for dinner. I hate this. My mom always asks me this, too—Where should I eat? As if I spend all my time in the West 50s exploring the restaurants. Thanks to the new media I can ask Twitter and, as if by magic, get a half dozen excellent suggestions in a half hour (thank you, all!). But this request found an uncommon response. One follower I don't know suggested BetonyNYC. Because the @ was used, one of the partners in that restaurant, @EamonRockey, who has moved to the front of the house, spotted it and invited me on Twitter to the month-old restaurant on West 57th. He copied executive chef @BryceShuman, who reiterated the invite. Well, what was I supposed to do? What's the etiquette here? Would it have been rude not to accept? We went with the flow and were glad we did: an elaborate, outstanding bone marrow preparation (above), deep-fried pickled peppers, poached lobster that were, remarkably, dispatched à la minute and cooked at sous vide temperatures, keeping them very tender, and my favorite, grilled short ribs (grilling being my favorite way to finish them; Shuman sous vides them first for 48 hours). The two veterans of 11 Madison Park are off to an auspicious start.

A friend had finagled tickets the next evening to David Byrne's interactive (and unlikely) musical about Imelda Marcos, Here Lies Love, that somehow blends torch songs and disco, martial law, assassination, the corrupting forces of political power, stirring optimistic love songs, and fabulous dancing while stage technicians continually rearrange the central stage, moving the standing audience along with it, bringing the audience into the play itself as potential voters and man-on-the-street photo ops. The title song is so catchy I bought it but won't play it unless I want to be hearing it in my head all day. David Byrne was one of my first stories for the Times. I was 22 and flew myself down to Texas where he was filming his musical True Stories. It felt like a full circle. Just like seeing Jeanne Pinder. Byrne, the protean artist, had come full circle and it was a thrill to see his amazing brain still creating.

After the show we walked across the street to Indochine. We hadn't eaten all day and it was, well, across the street, but more important, nearly thirty years ago, I'd taken my father to Indochine when I was a lowly, miserable, ambitious copyboy. Thai beef salad, a duck confit Thai salad, crispy shrimp, Thai scallops—still delicious. Manhattan in June—this time it was sweet.