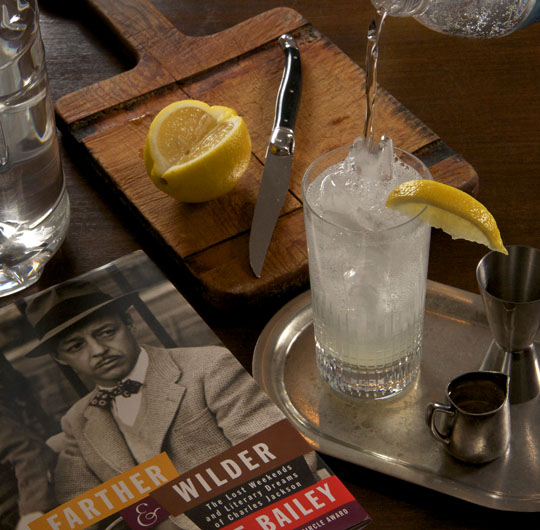 A Tom Collins, a favorite of Charles Jackson.
Photo by Donna Turner Ruhlman.

Today's cocktail is in honor of my best friend's latest biography out this week, Farther & Wilder: The Lost Weekends and Literary Dreams of Charles Jackson. Jackson is all but forgotten but was the toast of Hollywood for a time and a highly regarded novelist, best known for The Lost Weekend. The Wall Street Journal calls Blake Bailey's book "brilliant and gripping," which is all the more amazing in that the story is largely about literary failure. The Lost Weekend was until now Jackson's only enduring legacy, and remembered only because a great movie was made of it.

Blake, whom the Daily Beast and his next subject, Philip Roth, both called the best biographer working today, also wrote the award-winning Cheever biography, and his non-award-winning bio of Richard Yates, which was even better than Cheever in my opinion (shows you what awards are worth).

Charlie Jackson's The Lost Weekend was the first work of fiction to treat alcoholism as something that could be treated rather than an incurable personality trait and the stuff of comedy in the movies. The travails of the protagonist, Don Birnam, are so riveting, so mortifying and precise, it's hard to believe it wasn't lived in full by the author. Indeed, but for a single scene it is a narrative of actual events in the life of Charles Jackson, an alcoholic, closeted gay man (the subject of his second novel), married with two daughters, who for most of his life lived mired in debt and deep inner loneliness.

To celebrate the publication of the book—not alcohol or alcoholism—I asked Blake what was Jackson's favorite cocktail, what I might choose in honor of the now not-forgotten author:

"Charlie's favorite cocktail, it's a little tricky," Blake wrote in an email. "Don Birnam generally doesn't fuck around with cocktails—straight rye for him—but when he goes to that elegant bar in the village he orders a 'gin vermouth,' and we know from that souvenir bar tab from the Dolder in Zurich that Charlie was also partial to gin vermouths as well as Manhattans. (I presume a gin vermouth was an earlier, more vermouth-heavy version of the martini?) Toward the end of his life, however, he was drinking Tom Collinses for breakfast (see top of p. 410), and that's what I think you should offer your readers: a solid Tom Collins."

A warning: do not have these for breakfast unless you want to wind up like Jackson, a long-washed-up writer dead of a drug overdose in the Chelsea Hotel at age 65. Blake makes it very clear that Jackson wrote The Lost Weekend only after having gotten sober (the book notes that Jackson's 1959 Alcoholics Anonymous address to a Cleveland audience is available online). He couldn't write worth a damn while drinking or while on pills. Aspiring writers take note: alcohol has destroyed countless American scribes.

Moreover, forced sobriety prevents you from enjoying The Hour! One of the few reliable pleasure in, as Blake often calls it, this vale of tears. So imbibe moderately.

Herewith, the Tom Collins, in effect lemonade and gin, made lively with soda water, especially refreshing in summer (or, of course, at book parties).