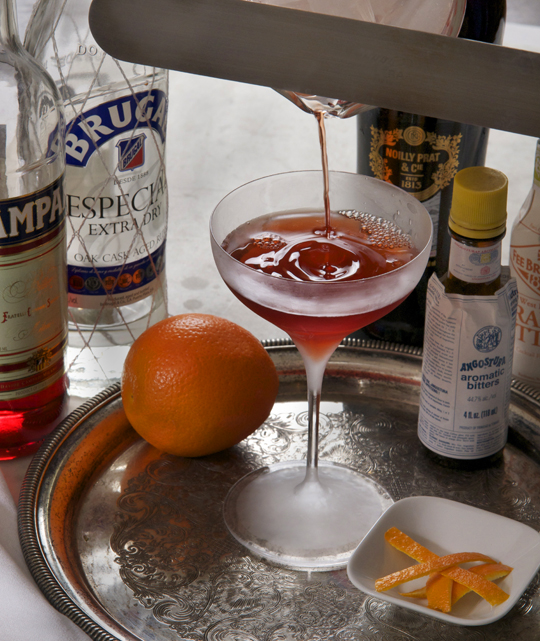 I pay for a service called SaneBox to deal with email overload, so much of it mass PR mail. Somehow a diligent soul, Sally Alfis of M Booth, who represents the company's spirit clients, got though the barricades. Having seen my Friday cocktail hour posts, she asked if she could send me some premium hooch. I never turn down free premium hooch. Thus, the most excellent rum in the photo (it's very good).

Surprisingly, though, she continues to read Friday posts and, following my hasty Negroni post (no link, Donna unhappy with photo), sent me a new cocktail made by Scott Fitzgerald (no, relation, though he does beat on, like all the rest of us boats) of the Mulberry Project in NYC.

What got me about Fitzgerald's lovely cocktail was its variation on a personal fave, the Negroni (thus Sally's clever suggestion—she gets Scott to create a rum drink featuring her client's rum, then gets me to post on the drink; it's all an incestuous little mingle, isn't it?). But I loved the cocktail. First, I'm a sucker for variations on a theme (I wrote The Making of a Chef obsessively replaying these, specifically the 1955 recording, though I love the slow open of the 1981 version), and this, like the Boulevardier, is a Negroni variant. But! Not a simple swap-out of spirit for spirit like the Boulevardier (whiskey for gin), but rather a more thoughtful riff, this including three bitter elements, all of which I'm fond of.

By chance, @wisekaren alerted me this morning, that just yesterday seriouseats did a feature and slide-show on negroni variants in the city, which is excellent; though the beet negroni seems a tad ridiculous, I would rather have that than the Red Rooster variation, which is a Boulvardier (noted by seriouseats in the caption), not a Bourbon Negroni as they call it (I'll lay odds they make an awesome vodka martini as well).

Without further adieu, with thanks to Madam Sally and Scott Fitzgerald, this week's cocktail is the finely balanced Man About Town.

Cheers, and have a restorative weekend!