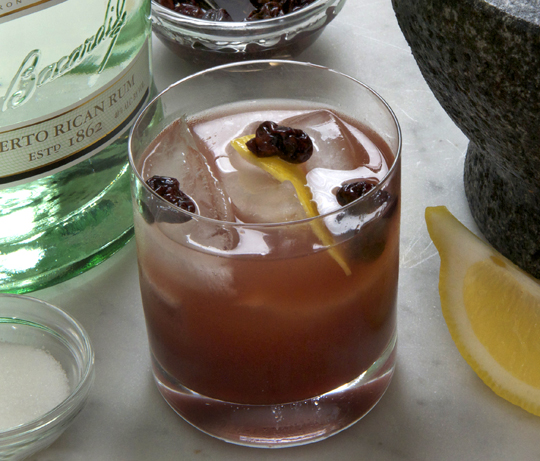 Some cocktails are spontaneous given what's at hand. I happened to be making nougat, the French confection created by pouring cooked sugar and honey into whipped egg whites, then folding in nuts and dried fruits. The pix were so stunning in the Bouchon Bakery book, I simply had to give it a go and attempt a paired down version for the home cook. I considered adding rum-soaked dried cherries and so prepared these. But by the time the eggs whites and sugar had cooled to glossy perfection, I worried that the red-tinted rum, attracted by the sugar, would leach into the stunning whiteness of the nougat.

When the shooting was done for the day, I had a bowlful of rum soaked cherries. Hmmm. How to put to use? "Donna! Don't put your camera away!" I shouted, post-work cocktail selfishly in mind.

I quickly grabbed my mortar and pestle and pulverized seven or eight soaked cherries and the rum (2.5 ounces in all) in the mortar, then strained it over ice (you don't have to strain if you like your cocktails chunky), added equal parts lemon juice and simple syrup and had an uncommonly fine drink on my hands, a variation on my Traverse City Zinger.

The painful, truly painful, part of shooting these cocktails is that Donna takes forever to shoot! I watch, salivating like a Pavlov dog.

(A word about the mortar and pestle, which I sell at OpenSky. Seriously, if our house were robbed by a desperate cook, and they took this, I would be seriously bummed, I would swear at them most heinously. I grind toasted peppercorns and coriander to rub into beef—it's the main spice mix for these killer pastrami short ribs—and pork and lamb. I make fabulous guacamole in it, and salsas. It's big and heavy enough to make an aioli in, old-style, but not lava-rock-rough like a molcajete, which I find are too coarse for my needs. )

Without further delay, then, the Friday Cocktail: 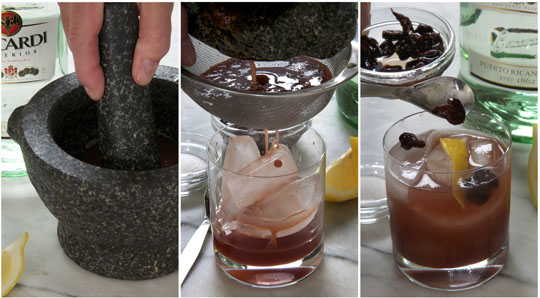