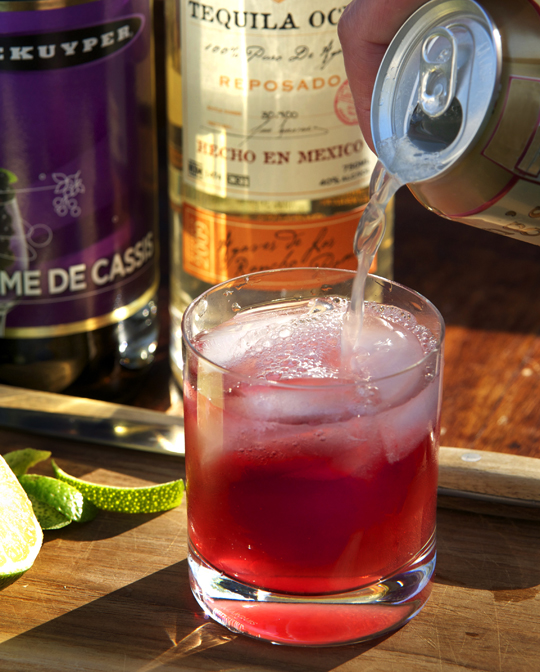 El Diablo is the perfect answer this weekend. Photo by Donna Turner Ruhlman.

Cinco de Mayo is Sunday. How many of you know what it celebrates or why? Shaw Lash is one of the key cooks and brains in the Rick Bayless Chicago operations, places I really admire. Last year she wrote why, having grown up in Texas and later lived in Mexico, the Cinco de Mayo madness drives her mad. She wants you to know what it means and asks should we celebrate it at all. Her short answer: It's a celebration of being Mexican. And it's a brilliant American marketing gimmick.

Shaw Lash is one of those aware people I admire, so when my able cohort Emilia suggested a tequila cocktail, I emailed Shaw. Shaw suggested a Margarita primer. There's an extensive discussion of all drink issues in Rick and wife Deann's book Frontera: Margaritas, Guacamoles and Snacks (Shaw developed and tested all the recipes). If you want in-depth info and recipes, go there, it's outstanding. But I've already posted on the classic Margarita (a drink to be revered), and Fridays are not "in-depth" days for me, with primers and what not.

Shaw said one of her faves in the book is the El Diablo.

Bingo! This is superlative cocktail. You've got to like ginger beer, though. Donna doesn't. I'm a Dark & Stormy devotee, I'll happily imbibe vodka in a Moscow Mule, and I love the El Diablo: good tequila, sweetness from the crème de cassis, balanced by the lime juice, and finished with bubbly ginger beer. It's a refreshing Friday cocktail. The following is an easier variation of what is in the book, which calls for a homemade ginger beer syrup—I urge you to buy the book for the real thing. But right now it's Friday. And I want a cocktail, so I've improvised (with Shaw's approval).

My pal Peter is having folks over tomorrow, so here's the recipe from the book for lots of folks. Peter, just make it with 16 oz. tequila, 16 oz. ginger beer, no sparkling water, keep the rest the same. Wish I were with you.