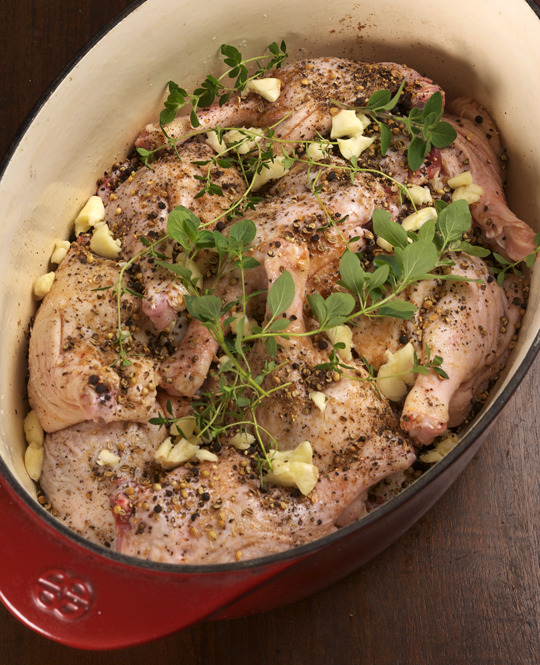 As fall nears, my thoughts turn to duck confit. I hope you’ll put this excellent and simple technique into your repertoire this fall. It's a great way to have a delicious meal moments away all fall and into the winter if you make one big batch. It keeps for many months in the fridge. Here’s my method using olive oil, which works great.

I love it so much that when Thomas Keller asked me to submit a piece for Finesse, his elegant magazine, on the theme of preservation, my mind went straight to duck confit. I’m reprinting it here in anticipation of fall cooking. It's about a lot more than deliciousness. (And for the literary folks, I’ll be in Raleigh tomorrow—9/18/15—for the Southern Indie Booksellers Association event, promoting my new fiction, In Short Measures. On Sunday I’ll be at the Brooklyn Book Festival on a panel of debut fiction writers. Come say hello!)

The moment I heard how it was prepared I was in love. My first bite confirmed that love, and I have been faithful to duck confit ever since. Rich fatty duck legs are poached low and slow in their own fat, then cooled in that fat and, protected from the air and bacteria, left to ripen for a week or weeks or even years. The legs are then extracted from the duck lard, like treasure from thick snow, and are roasted or broiled till the meat is delicate and succulent and the skin is crisp.

The result is quintessential duck, the pinnacle of duck, rich and nutritious and satisfying. No better form of duck exists, I am convinced.

Such was my love for duck confit that I explored it further, all the while imagining small diced potatoes crisped in more exquisite duck fat, further pleasing myself—until I realized that this duck was not originally intended for my pleasure.

Duck confit is more than a culinary luxury. So much more, in fact, that I felt guilty for under appreciating the preparation. Duck confit was not created for pleasure, not to raise the noble bird to culinary heights; rather it was created so that families didn’t go hungry in winter. It was created for our survival. And so ingenious were our ancestors that not only did they find a way to preserve duck for the following winter, but more, they did so in a way that resulted in a preparation so satisfying that restaurants throughout America now make it routinely, though our survival through the winter was long ago taken care of.

America is geographically so vast that we have no true national dishes (except perhaps the burger and fries or the TV dinner). We have regional ones—chowder, gumbo, eastern Carolina barbecue—but our food culture came together mainly after the advent of refrigeration, and so we did not rely on the preservation methods that have given other cuisines, over centuries, national dishes unique to that terroir and that culture.

Nevertheless, my reverence for duck confit, as a tribute to human ingenuity and an emblem of the food preservation that allowed communities to survive and flourish, grew. Ultimately this love of and respect for duck confit lead me to the epicenter of this great preparation: Gascony, the territory of the southwestern corner of France, the rugged beautiful terrain where confit de canard is not just a staple dish but is still prepared as a way of ensuring a family’s food will last through the winter.

So vital it is, says American ex-pat Kate Hill, who runs a culinary program there largely devoted to preservation methods involving the pig, that a family will not eat this fall’s confit in March, nor the confit put up the previous year. Some only allow themselves the confit from two years prior to ensure they have enough.

And that is the power of this technique. Meat properly preserved this way can be kept in a cool dark cellar for two to three years.

The prevalence of duck confit in that territory resulted in a famous and beloved dish, the cassoulet—a stew of Tarbais beans native to the region, comprising duck confit, sausage, hunks of pork and pork rind—a subject of endless argument. From the ancient technique of preserving duck comes a dish that is a part of France’s national cuisine.

Many of France’s great traditional preparations feature parts of the pig, preserved, referred to there as charcuterie, whether as a country pâté or a saucisson sec (dried sausage). Head south to Italy and you will find foods, considered quintessentially Italian, rooted in their society’s food preservation history. Pancetta (pork belly), prosciutto (ham), lomo (loin), guanciale (jowl), are all cuts from the pig that Italians salt and dry-cure in order to preserve the meat. They do the same with beef loin, which is called bresaola.

On a trip through Italy exploring its food preservation techniques, I ventured miles up mountain roads, along hairpin turns, to the town of Colonnata, renowned for its lardo—pure hog backfat that has cured at least six months packed in salt in marble casks. Just reaching this town by car, in the hills above where Carrera marble is quarried, is an ordeal. Before cars and roads, inhabitants never left this mountaintop town. If they did not preserve their food, they died. In America we throw fat out. In Colonnata, they stayed alive on it, and in the process created a world-renowned delicacy still in demand today for our pleasure.

On the other side of southern Europe, there is Spain’s famed jamón ibérico. Neighboring Portugal is known for it’s bacalao, salted and dried cod. To the north in the United Kingdom, beef is preserved, or corned. In Scandinavia, fish is preserved as lutefisk and gravlax. Korea is famous for its spicy preserved vegetables, called kimchi. In Russia their lardo is called salo; travel to nearby eastern Europe and the salo will be coated in the paprika native to the area. Areas of the world not well-known for their preserved meats are places where food tends to be abundant all year long—Japan for example, where the sea provided fresh food all year round, and Northern California (the Napa Valley especially)—but even these places give us their own preserved specialties: miso: fermented bean paste, and wine: preserved grape juice!

So much of the food in contemporary America is preserved using “preservatives”; our preservation techniques are in the service not of nutrition or deliciousness, but rather “shelf-life.” But during the past decade, recognizing what we stand to lose, and learning that preserving food results in some of the most delicious and nutritious foods we have, a wave of chefs and home cooks have created a food-preservation renaissance, whether it’s putting up summer’s bounty in jars, exploring the world of French charcuterie or attempting the craft of Italian salume.

I like to think that this renaissance in preserving food in America is an unconscious nod to the fact that humanity once depended on food preservation for survival, and that if we fail to remember this and honor it, we jeopardize our own future.

So duck confit is an emblem for me, but sometimes duck confit is just duck confit. Rich and delicious and soul-pleasing. I make a big batch in the fall, a dozen legs. When Jason and Tara Tipton’s ducks, at Tea Hill Farms in nearby Loudenville, Ohio, are fat. Because I’m only preparing the legs for the coming winter, I don’t worry overly about preservation. I confit the duck in olive oil, with salt and pepper, thyme and garlic. It keeps for nine months or more submerged in olive oil and is at the ready to pop in the oven while I make a salad and open a big red wine for a simple winter’s dinner. I remain connected with the past while considering the desires of the present. A nutritious and satisfying meal that takes minutes to prepare.

Duck confit is the kind of fast food I wish America would eat more of, thanks to our ingenious forebears.

If you liked this post on duck confit, check out these other posts:

« The Economy of a Loaf
French Onion Soup! »