Having come into the possession of several exquisite lamb tenderloins from the well-known and much admired John Jamison, and it being too cold for pleasant grilling, I pondered what to do with them. I wanted to flavor but not overpower them. So I returned to an old idea: the cooked marinade.

Marinades do one thing: they flavor the outside of the meat. That, combined with a grill pan, would give just the flavor I wanted. If you infuse the oil with aromatics and partially cook those aromatics, the aromatics themselves (here, garlic and shallot) are more deeply flavorful.

I’m loving my grill pan this winter. It does add flavor in ways that oil in a skillet does not. It helps to have one with a top piece that you can use to press down on the meat, searing the meat on the ridges and trapping the smoke created when juices and fat touch the grooves.

I’ve known of John and Sukey Jamison since writing about Michael Symon in the late 1990s in Soul of a Chef. He believed their lamb to be the best in the country. It’s hard to imagine there’s better lamb.

And I met John last summer when Dan Barber came to speak about his fabulous book, The Third Plate. John had driven from Pennsylvania to hear Dan. “I love Dan,” John told me. “He buys all the necks.” That is the parts that most people don’t want. I love that about Dan, too.

Herewith, the cooked marinade for Jamison lamb tenderloins. Thanks, John and Sukey! 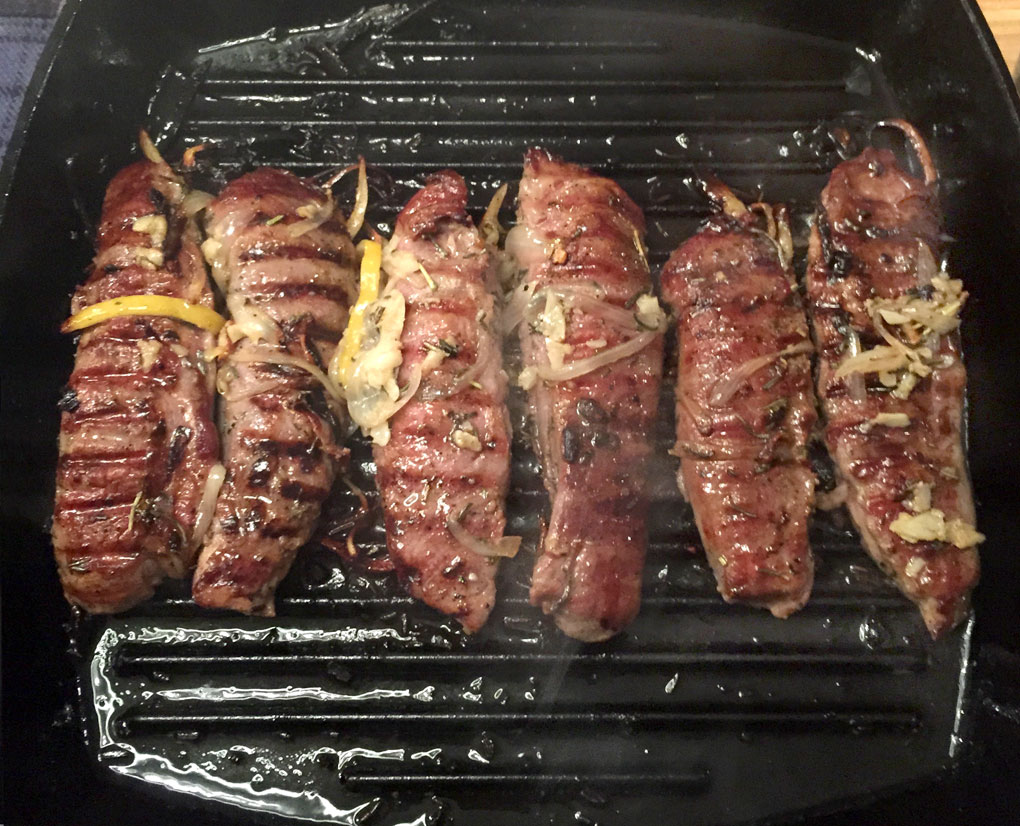 Combine 1 sliced shallot, 4 smashed garlic cloves, 5 or 10 strips of lemon peel, dried or fresh rosemary, a few pinches of cumin, and a pinch of cayenne in a sauté pan with ⅓ cup olive oil over high heat. When the shallot is simmering, give the pan a stir and remove it from the heat. Allow the oil to cool till it’s not uncomfortable to touch (or to room temperature) and pour the marinade over the lamb (which you’ve salted and peppered even before you began the marinade, yes?), and toss it all together. The longer it sits, the better, but you can cook it immediately if you wish. Lay the oiled lamb in a grill pan and spoon the remaining aromatics over the lamb. Cook to medium rare, a couple of minutes on each side, allowing them to rest for 5 or 10 minutes before serving.

If you liked this post on cooked marinade, check out these other links: