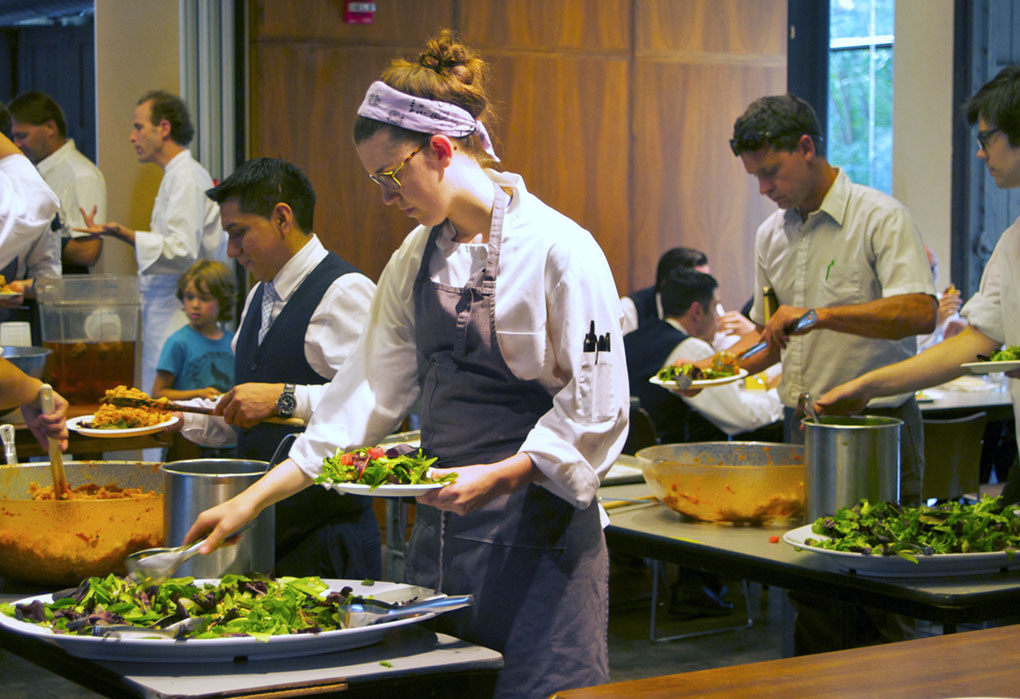 The above photograph (by Donna Turner Ruhlman) is of family meal at Blue Hill at Stone Barns. The below essay was originally published by Finesse, Thomas Keller's magazine, in an issue that explores the notion of community. In light of the brouhaha begun last week over a study arguing that the family meal is a romantic ideal rather than a simply a good idea, an elite foodie construct that merely makes overstressed middle class moms feel guilty, I'm posting it here. On re-reading, it may seem a bit over the top. But then ...?

Community. How nice. Hippies bagging granola in co-ops. Neighbors spending an afternoon weeding a communal garden filled with tomatoes and basil, bell peppers and a couple of bean plants. Isn’t that special? How Berkeley! Let’s make it the theme of a magazine!

I write to say that community is so far beyond a good thing, so far removed from the examples above, that to fail to understand what community actually means endangers humanity.

For “community,” per se, is neither good nor bad (the Nazis were a community, don’t forget). Rather, community is a lever so powerful that we fail to recognize it as such at our peril. It is so powerful, in fact, that it is arguably what allowed Homo sapiens to flourish on earth as no other species has. And to ignore or belittle community is to put humanity at risk, never more so than now when all peoples face unprecedented perils and even greater opportunities.

This country became food obsessed because for decades we took food for granted—until that food started making our country sick. And when something you take for granted, something you need to survive, starts making you sick, it’s pretty much all you can think about (try going without air for a few minutes if you doubt me). This underlies so much of the current food information and obsession we’ve been experiencing for many years now, the so-called food revolution. (And not a moment too soon, if you ask me.)

But food, like community, is not simply important to our survival, like, say, water. Food is arguably the primary reason human communities formed in the first place, 200,000 years ago, creating a species that would evolve to build the pyramids, write the literature of ancient Greece, create the art of the Renaissance, establish American democracy, and also has prevented, so far, the prevailing of murderous dictators and nuclear holocaust.

In his book, Catching Fire, Harvard anthropological biologist Richard Wrangham writes that for hundreds of millennia, all mammals ate raw food. In the ape world, mammals had to sit for six to eight solitary hours chewing up vegetation in order to get enough calories to be healthy. But at some point, our hominid forebears started cooking food and everything changed. Cooking food gave our ancestors enormous amounts of calories in no time at all. Suddenly flooded with calories, our calorie-hungry brain grew large. This calorie-rich food made us uncommonly healthy and allowed our genes to spread. It changed our bodies (smaller jaws, smaller guts). And it changed our temperaments—we had to cooperate with one another.

The latter impact is critical to examine. Cooking took work (still does, a good thing!). Someone had to go out and hunt animals. Others had to stay at home and protect the food supply and offspring (and cook the tubers and vegetables in the event the good-for-nothing men came back without any woolly mammoth to roast). If we wanted to take advantage of cooked food (that is, if we wanted to continue to grow smarter and healthier and spread our genes) we had to work together. Only by forming communities and working together could we realize the phenomenal advantages of cooked food. It also allowed us to protect one another and keep our families healthy and safe in a dangerous world. We shared duties, watched other's kids, and benefited from the protection and help of others.

Furthermore, we were not passing 40 or 50 pounds of plants past our larynx, so it’s possible that cooked food allowed for the evolution of more refined vocal chords, which allowed for the development of language, that primary tool for strengthening community and cooperation.

It can’t be proven why Homo sapiens suddenly flourished 200,000 years ago. But the earth is home to more than five million species of mammals. There were at one time 16 species of mammals that walked upright. Humans are the only one of them to survive. We remain the only animal that cooks its food (no human community has survived on raw food alone). We, the cooking animal, not only flourished but became arguably the most successful species in the history of the planet.

Because, thanks to cooking, we formed the most cohesive and effective communities of any other mammal. Only by joining forces could we compete for scarce resources and difficult-to-attain food, protect one another from competing species, and raise offspring healthy enough to produce healthy offspring of their own.

So it seems to me rather prescient that a magazine that came to be because of the success of a small group of restaurants, one of which is explicitly devoted to family-meal service, and all of which are devoted to cooking and serving excellent food, has chosen to focus on community. Far more than some Kumbaya theme about working together, the touchy-feely, share-and-share-alike ethos that talk of community can engender when taken for granted, the idea and power of community is something we must acknowledge as a fundamental building block of our species, one brought about at first by our recognizing the power of cooked food, and then by the recognition that in maintaining strong communities, in all their forms, lies the health of our species.

There has never been a time when recognizing this fact has been more important. We live in a time of extraordinary opportunity, but also extraordinary peril. The litany of dangers is daily conversation—rising temperatures and rising oceans; population growth so rapid that famine is a danger for increasing numbers; dictators still threaten not only their own citizens, but the globe, and religious fanatics terrorize and kill innocent people. We need only look to the United States Congress to see what happens when a community does not work together—it stagnates.

During the past decade we've begun to appreciate the fundamental importance of food, how we grow and distribute and consume it, to our lives. It is critical, then, to recognize the fundamental importance of what comes naturally out of that food, what came out of it 200,000 years ago, and what comes out of it today: working together, cooperation, and the forming of cohesive communities. Our survival depends on this.