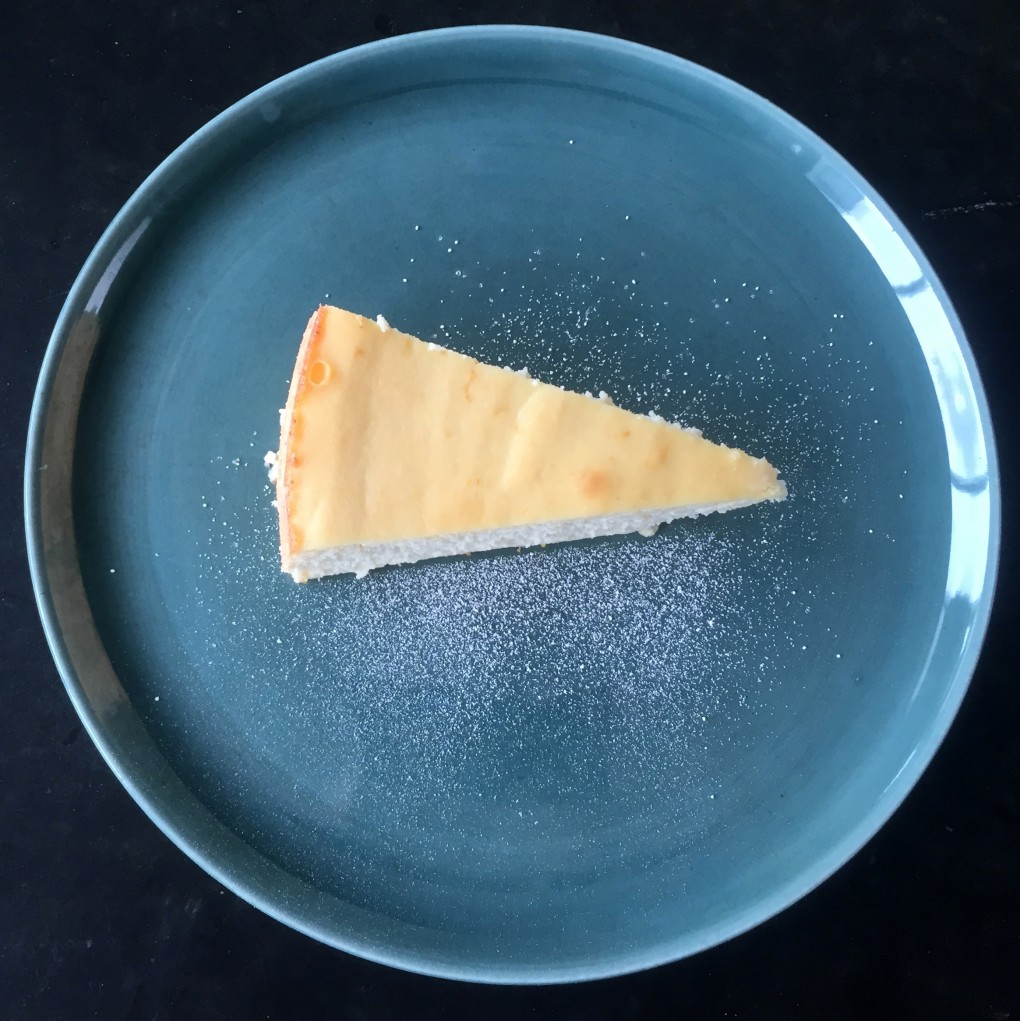 The best things in life happen when you say yes. I don’t know any great things that have happened because someone said no. And, of course, read the end of Ulysses if there’s any doubt about the ultimate nature of yes. The below is from my friend Claudia who will be opening Citizen Pie in Cleveland this fall along with her partner, Paulius of the Velvet Tango Room.—MR

One spring afternoon, four months ago, someone suggested, that we open a Neapolitan pizzeria. And of all the things that one might say in response to that—“We’ll have to think about that!” or “What an interesting concept, we’ll get back to you!” or “No”—we said “Yes.” Just like that.

I wanted to make a culinary contribution to the menu all my own. And one of my favorite desserts since I was a young girl growing up in Forest Hills, NY, is ricotta cheesecake. It’s as Neapolitan a dessert as one might find anywhere in Campania. Lidia Bastianich served it at Buonavia on Queens Bouelvard, six blocks from the apartment where I grew up back in the 1970s. And just four miles down the road in Corona, Park Side restaurant, a then (still?) Mafioso hangout right across from the bocce ball courts and the Lemon Ice King, had a version I couldn’t resist (along with a fetching owner who coolly played down my ardent teenage stares).

All these years later my ideal ricotta cheesecake is a bit on the dry side and not too sweet. It has little cubes of Italian citron and is served beside a double espresso. But in my baking of fourteen cheesecakes in three weeks I have met with some questionable concerns from the people of Cleveland. Two words: cream cheese. At first I was resistant, but being part of a successful venture is to understand what your patrons want. And, well, Gina DePalma insists that it’s OK, so in that I take a small degree of solace.

Cheesecake baking is a forgiving business. I can attest to that as I pulled number thirteen (coincidence?) out of the oven thinking it was set and tilted the pan slightly only to have a third of the batter spill all over my counter. I quickly scooped it up, put it back in the pan and threw it right back in the oven and honestly it wasn’t much worse for wear (albeit not a winning beauty). Still, it surprised the hell out of me as I had assumed it was a goner. 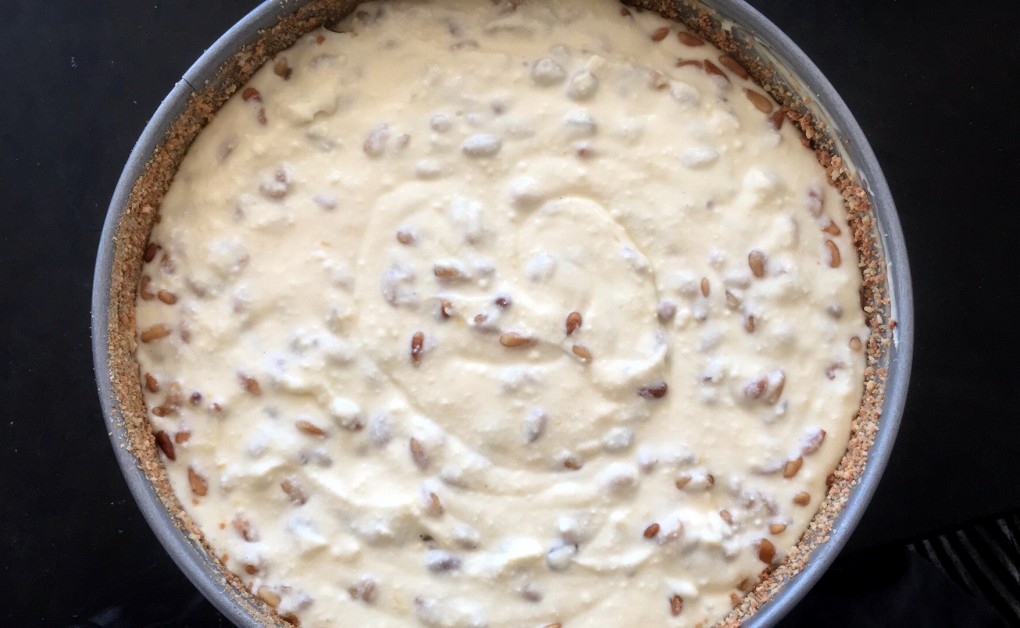 One critical factor is to drain your ricotta well. Excess moisture is problematic. With all the Italians insisting on a good rest in a colander—even overnight—I couldn’t understand why gently wringing it out in a linen or finely woven cotton cloth wouldn’t solve the problem à la minute. And it did, perfectly. And just one more thing, which for you is most likely intuitive but because I am so ridiculously impatient, I implore you to leave the form on the base until it has cooled down. I cracked a canyon down a perfectly nice cheesecake. Again, still tasted great, but not pretty to behold.

Michael asked me to offer a couple of recipes that I made during the Great Ricotta Cheesecake Experiment of August 2015. The following two are not my own, but I love them and they were instructive. They are very different from each other and really, very different from anything I had ever tried before. One incorporates semolina in the form of a porridge, making the cake almost pudding-like, and the other a hunk of ricotta salata, which I found irresistible because of the resulting texture and the forward salt edge.

The final contender? I think I’ll keep that one a trade secret, at least for a while—but it’s the result of a total of 30 pounds of five different brands of ricotta and suffice it to say, it has cream cheese in it and it’s a truly wonderful, crowd-pleasing showstopper, baked low and slow in a water bath with a well-considered ratio of ricotta to the stuff in the silver box. It still retains the flavor and enough of the texture that I love combined with a creamy mouthfeel to please a pizza lover’s inclination to leave a little room for dessert.

NOTE: if at all possible, find a ricotta free of any added gums such as carrageenan—they’re optimal for baking cakes. 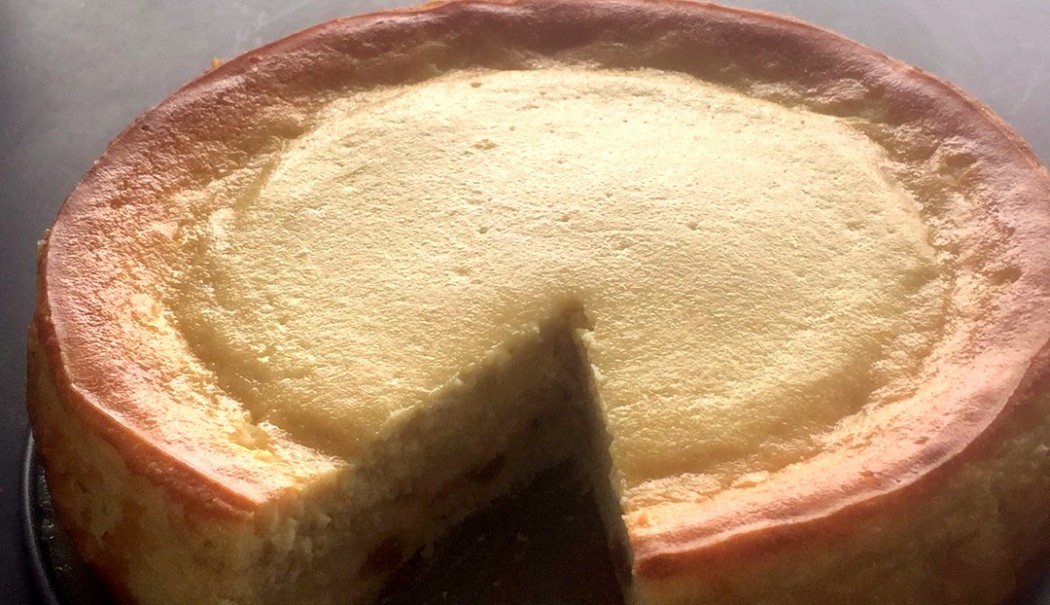 Adapted from Arthur Schwartz, Naples at Table: Cooking in Campania

Arthur is as well versed in southern Italian food as perhaps any American could ever be, and he recently took time with me on the phone to talk about Naples and Salerno, where he spends his winters. I was compelled to buy his book and I am so very glad that I did. I love custards and puddings, so this was going to be an obvious favorite for me. His version calls for farina, as the Italian immigrants who came over were hard pressed finding semolina, but now it’s quite common and I love it, so in turn I subbed it for the farina!

*Citron is very fragrant citrus fruit with a thick rind that is cooked in sugar, diced, and used as a confection. The pulp is dry and not suitable for culinary purposes, at least not in Italy. American versions used in fruitcakes are just awful, so if you’re going to use it, which I highly recommend that you do, find a good Italian version on Amazon or Market Hall Foods.

Thanks to Elaine from The Italian Dish for turning me on to this delicious version— loved it! The ricotta salata is a surprising addition and I was blown away. This recipe also calls for pistachios, pine nuts, and raisins, but to me, these detracted as opposed to added to the finished product. Baked, soggy nuts are not my thing, and the golden raisins ran interference with the rest of the add-ins, in my not-so-humble opinion.