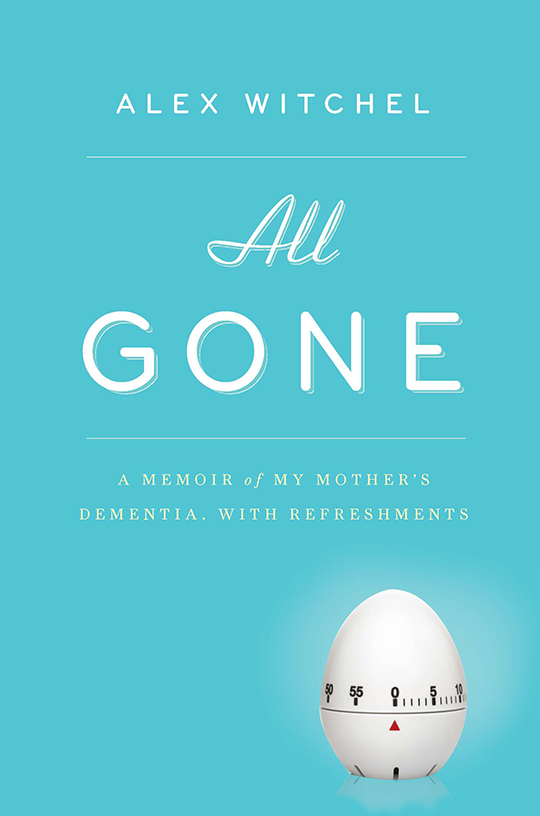 I’m an audible memoir junkie. Love to listen to them read by the author. Some are great readers (Mary Karr), some woeful (James Atlas), some as depressing as their subject (Andre Dubus III), some every bit as hilarious as you hoped they would be (Ellen Degeneres, Tina Fey). I recommend every one of these memoirs.

The author and NYTimes reporter Alex Witchel this fall published a second memoir subtitled “A Memoir of My Mother’s Dementia. With Refreshments.”

A memoir of struggle and sorrow and deep grief. With recipes. Witchel reads the recipes. After the first chapter, I honestly didn’t want to listen to the recipe for meatloaf (though I was intrigued by the addition of Corn Flakes). I thought it, like the subtitle, was a gimmicky sales ploy to convince buyers that, yes, it’s a tragic tale, but … WITH RECIPES! Smiley-face emoticon!

It wasn’t till the end of Chapter 2 that the full impact of the food came to the fore. The author’s genuine care of food, not to mention her mother, whose personality is falling through her fingers like sand, made it clear how much of a piece food was of Witchel’s relationship with her mother and with the world.

Witchel’s mother cooked daily for a family of six, but didn’t like it. She embraced convenience food. Minute Rice was a blessing. There seemed to be actual loathing in the Sunday morning eggs she cooked for her four kids, Alex being the oldest. But the food meant a great deal to Alex, so much so that in adulthood she asked her mom to give her the family recipes (“Is there any contract tighter than a family recipe?” Witchel asks).

And when her mother is alive but no longer reachable due to strokes, Witchel finds sadness in cooking the recipes of her life. While the smell of Mom’s meatloaf can actually bring the sound of their 1960s Passaic, NJ, garage door opening, signaling her professor mom’s return home, the cooking is pervaded with sadness.

“These days when I make her food, … smelling the signature mom’s-home aromas that signal safe harbor at the end of the day, it brings her nearer, yes. But even as I imagine her over my shoulder watching me as I used to watch her, I know I am cooking alone. It is not home cooking without the home. She cooked for me because she loved me and wanted to take care of me so I would grow up to be big and strong. And I thought I had done just that until it came time for me to take care of her.”

This sentence is followed by a recipe for Chicken with Prunes, and many others, following the author’s gradual recognition that something is going wrong with Mom and the oncoming work of juggling doctors’ visits, medical decisions, her own complex family, a critically ill younger sister, and a demanding job as a reporter for the paper of record—while Thanksgivings still arrive as scheduled.

It’s a good story overall, filled with a lot of good small ones, such as how she became the writer that she is, how she and her husband, Frank Rich, former Times theater critic and op-ed columnist (it concerns a newsstand and the first time the paper printed the word penis in a non-science story), and helping to raise (and cook for, of course) his two boys, her step-sons (now writers who merit their own coverage in the New York Times).

But in the end everything somehow returns to food and to being together.  Witchel even compares writing a profile with preparing an elaborate dinner that is dispatched within minutes.

All Gone is a short, lovely memoir, moving in its description of grief and the loss, the painfully slow loss, of a beloved parent, never self-indulgent and with enough bright spots to balance the blackness, such as the time she proudly taught Martha Stewart how to make her mom’s latkes only to have her moment in the spotlight cruelly snatched away from her. And there is a moment at the end, a remark from her mom during her final conversation with the daughter who did indeed grow up to be very good, and very strong, a comment about decorating that brought me to a full-on weep. Which isn’t necessarily a good thing when you’re driving 70 mph on I-271. We book listeners don’t get to chose our moments when words make us come undone. But it certainly underscores the talents of a really good writer. 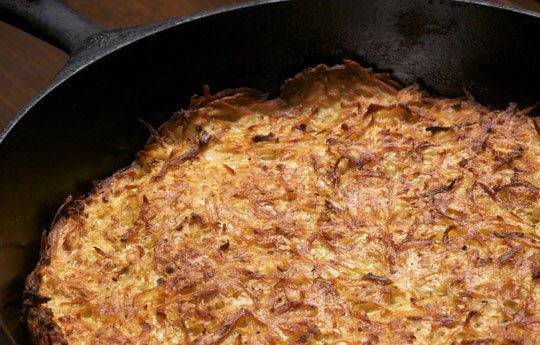 This is Lois Baron’s kugel, not the Witchel family latkes. I went so far as to email the book’s publicist for the latter, but when I listened to it, it was so similar to the kugel recipe in our Book of Schmaltz, that it was easier to offer that one here. It should go without saying that the Witchel version does not include schmaltz, hardly a convenience food. Though her mother surely would have grown up knowing schmaltz, she’d have eschewed it as an adult. This recipe uses more onion. It’s also far easier than making individual pancakes, and thanks to the schmaltz is surely every bit as delicious Alex Witchel’s latkes. If you don’t have schmaltz, omit it, and simply cook the potato in ¼ cup hot vegetable oil.