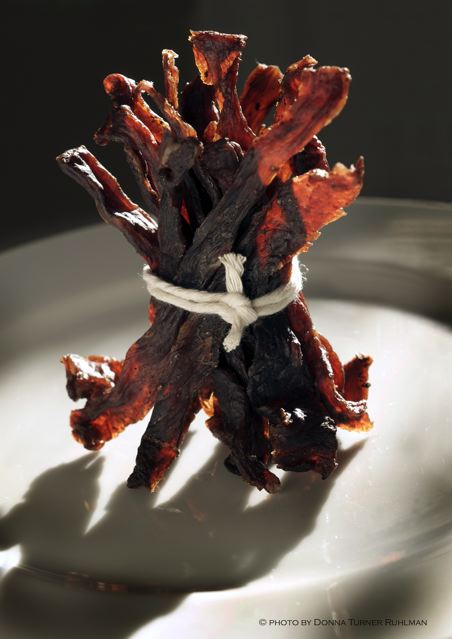 Among the most easy and satisfying preservation techniques is beef jerky: cut strips of lean beef (the less expensive the cut, the better), salt and season them, let them cure for a day in the fridge, then spread them out on a rack to dry. When my daughter asked me to buy some at the store, I made the above instead.

I love the fact that it's a useful form of preservation. A friend I met in a wooden boatyard was formerly a cowboy who worked the land from Texas to Canada, tending and protecting cattle, birthing calves over huge expanses of territory, often alone for long stretches. He says he jerked, or dried, meat whenever he killed anything, such as deer. When his food ran out, he’d butcher one of the cattle. If he was alone or even traveling with several others, that would leave him too much meat. So Robert would cut the meat into thin strips, salt it if he had salt, keep it in a cool, shady spot during the day (it would become rancid in the sun), then hang it at night. If he was on the move, he said, jerky was important because you could carry a lot of it easily—it weighed so much less than fresh meat.

For this reason, jerky remains a great item to make for long camping trips. This same method works well with venison. Typically, lean meat was used, which dried more thoroughly and thus lasted longer, since even preserved fat can become rancid. The round is about as bland and tasteless a cut as you can find, but through curing, seasoning, and drying, you can transform it into something superlative and useful.

The following recipe is adapted from Charcuterie. We'd begun with soy as one of the seasonings. Brian changed it to chipotles in adobo. Because I had some chipotles ground in the spice mill, I used that. The technique is infinitely variable. Season it with flavors you love.

If you liked this post on beef jerky, check out these other links: