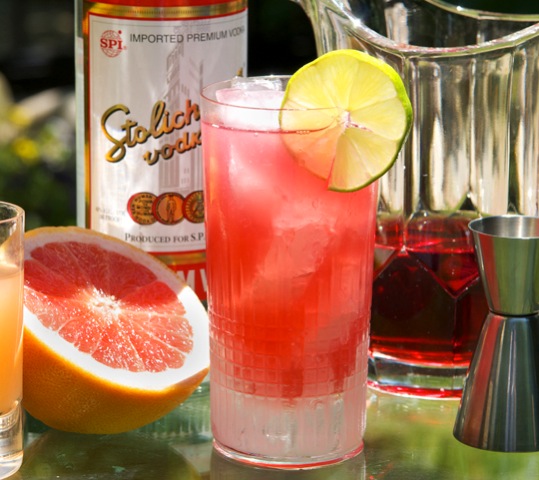 The first table I ever waited on would comprise two serious chefs, Richard Czack and CIA prez Ferdinand Metz, and the parents of a seminal American chef. It was in the St. Andrew's restaurant at the Culinary Institute of America and it is forever linked in my mind with two similar drinks, the Sea Breeze and the Madras. The following is from the book that forever altered my course:

Chef Czack did not look like a chef—balding, glasses, slight of frame; I didn't know his age but he seemed elderly. His voice was nasal, fussy. He looked and sounded more like an accountant's clerk. But Chef Czack was in fact a certified master chef and I was excited to be serving him and his guests, Mr. and Mrs. Forgione, parents of celebrity chef Larry, and an unnamed fourth. This would be fun.

Chef Czack and the Forgiones arrived as scheduled and were shown to table forty-two, at the back of the room, immediately in front of the dormant fireplace. Like a horse out of the starting gate, I broke for the table, greeted the three guests, and, standing at Mrs. Forgione's right, asked if anyone cared for something to drink. Mrs. Forgione wanted something nonalcoholic and ordered a Sea Breeze [the restaurant served beer and wine only as I recall]. Mr. Forgione said that he had no idea what a Sea Breeze was. Chef Czack looked to me and said, 'Tell us, what is in a Sea Breeze?'

Certainly, Chef Czack had asked for the benefit of Mr. Forgione. He had not asked because he himself was curious, I don't think, or to test me in front of the guests, to show off the students, yet something in his tone led me to squint a little, as if to show I was working diligently at a tricky problem. I'd long known what a Sea Breeze was and we'd been tested on it as well, but I still made it look difficult. Then, with pride and confidence of having accomplished this difficult task, I said, 'A Sea Breeze is three-quarters orange juice and one-quarter cranberry juice.'

Chef Czack, if my recollection is correct, said something in response. He could just as well have been speaking Chinese for all I understood. Something had gone wrong with my ears. I nodded and smiled. Chef Czack may have said, 'Traditionally what you described resembles what we might call a Madras. A Sea Breeze is made with cranberry juice and grapefruit juice.' I do know that he had not said, 'Sorry, pal,' and he had not made a Jeopardy wrong-answer noise. Either of those would have penetrated the fog that had rolled into my head. I had become so oblivious that I did not even realize the mistake until later, as I tried to reconstruct the events of the day—much as one might glue together a broken vase.

—From The Making of a Chef: Mastering Heat at the Culinary Institute of America

So began my days-long career as a waiter. I was astonished by how hard it was. It got easier of course, but it was there that I realized that servers got slammed just as hard as cooks, and cooks didn't have to deal with people. People could really fuck your day up. People, whom yet another master chef described to me once, with wave of his hand, as "the sea of mediocrity out there."

I was right at home in a kitchen.

To this day, a Sea Breeze reminds me of that day. It's a lovely, refreshing drink, wonderful for summertime imbibing, and I especially like the bitter note the grapefruit juice gives it.