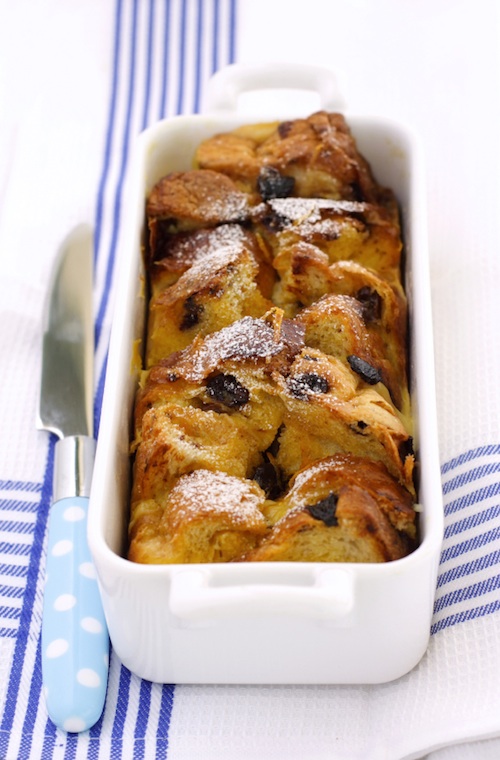 Still recovering from 10 days of Key West fine food and postprandial debauchery, I’m giving my site over today to my friend Stephanie Stiavetti (@sstiavetti), who writes The Culinary Life blog, and whose first book, Melt, will be published next year by Little, Brown (a fine book to which I happily contributed the introduction). I'll be back on Friday with a Key West–inspired cocktail to combat the winter grays. Take it away, Steph, and thanks for keeping it simple and discussing a critical cooking technique!—M.R.

Bread pudding needn't be complicated. At its core, custard is a straightforward dish consisting of cream and egg yolks. For a sweet custard you add sugar, alongside tiny, fragrant vanilla beans (usually), and that's about as fussy as it gets. The best bread puddings are marked by their simplicity—I've read through some recipes that span two or three pages, some incorporating as many as 20 ingredients. These dishes can be good, but they've got nothing on the uncluttered elegance of a more traditional recipe.

When it comes to custard, what trips up a lot of people is the bain marie, also knows as a water bath. Custard likes to be heated slowly, lest it curdle, and the surrounding moat provides ample protection from cooking too quickly. The steam from the water bath also prevents the surface of a custard from drying out, which in a bread pudding can mean tough, pokey bits that are almost too hard to chew.

Don't let the water bath frighten you. Just know ahead of time that you will need to find a pan that comfortably holds an 8x8-inch baking dish while maintaining an inch or two of space around all sides for water—a roasting pan works well. If you don't own a pan large enough to hold your baking dish, you can divide the recipe into two large loaf pans, which fit easily into any number of standard oven-safe vessels. Just bake them one at a time, reducing your baking time by about 15 minutes (depending on your oven).

When your bread pudding is done baking, it's not a bad idea to remove the baking dish, leaving the water bath to cool down in the oven. That way, if you're at all clumsy and at risk of pouring a roasting pan's worth of water down your frontside, at least it won't be at near-boiling temperatures when the inevitable happens. Not that it's ever happened to me. Ahem.

One last note: Much like lasagne, I've found that bread pudding tastes best when it’s allowed to sit overnight in the refrigerator, then brought back up to room temperature before serving. If you can’t wait that long to dig in, temper your patience at least until the dish is completely cooled and the custard has solidified.

*Don't waste the spent pod from the vanilla bean! Slip it into a container of sugar to make vanilla sugar.