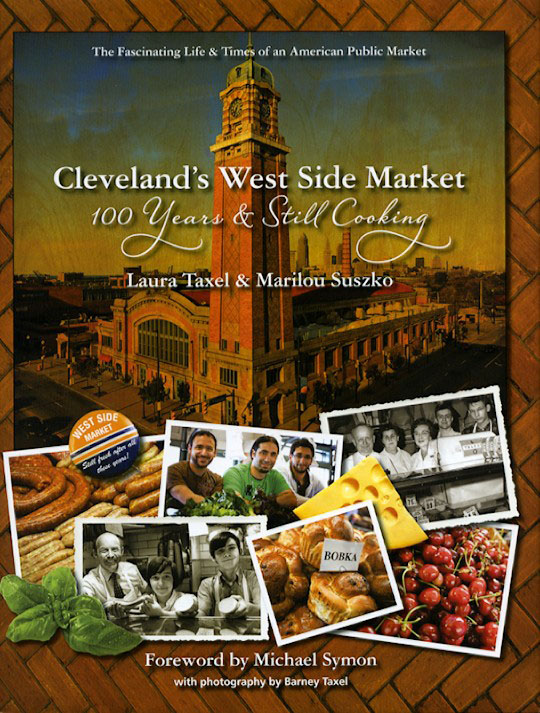 Cleveland's amazing West Side Market turns 100 years old and celebrates tomorrow with a great big bash of chefs and food. Greenhouse Tavern's Jonathon Sawyer had it right when he called it "a cathedral of meat." Right on! The building itself, completed in 1912, one of the few municipally owned and continuously running markets in the country, is flanked by vegetable venders. Cheese and dairy run the inside north wall. Nuts and prepared food and pastry run the southern boundary. Kate's Fish on the eastern side of the market sells pristine fish. Near her, I buy coriander seed, curries, and pink salt from Narrin Carlberg's amazing spice booth. French lentils and other spices are on the west side of the cathedral, across from Sawyer's Noodlecat, selling steamed buns and fresh ramen. Can we just take Sawyer's lead and call it Cleveland's West Side Cathedral?! 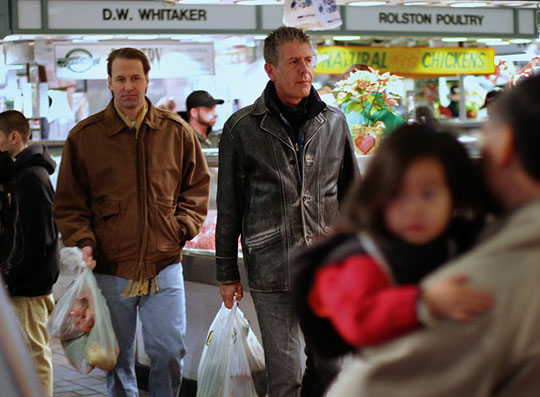 Bourdain wouldn't come to Cleveland and not visit Cleveland's Cathedral of Meat.

I'll be demoing bacon curing and cooking at the Fabulous Food Show next week (I did a video promo at the market). Where did I get my pork belly for next week's demo, where I'll be showing how curing your own bacon can save the world? Pinzone's pork and beef stand in the southwest quadrant; I asked the guy to cut me up some pork bones to make stock for the ramen I bought at Noodlecat while I was there (Ohio City Pasta, across from the Noodlecat booth, developed the ramen, udon, and soba—fabulous!). It was the first time ever I'd gone there and not seen Tony Pinzone actually there (it was lunchtime). I don't know where else you can buy fresh rabbit in the city, or lamb hearts. West Side Market.

The West Side Cathedral is one of the reasons I love, love, LOVE Cleveland! Bourdain was astonished. Mike Pardus's jaw dropped. "This is like something you'd see in Vietnam," he said of the teaming, packed market on a Saturday morning. Veteran Cleveland writers Laura Taxel and Marilou Suszko tell the whole story in their new book Cleveland's West Side Market: 100 Years and Still Cooking, the beautifully told story of the market, from its conception to its building (at the time, because bathing and laundry were not easy, developers considered building baths), to the people who make it come alive every Monday, Wednesday, Friday, and Saturday mornings before sunrise. I found the book not just fascinating but deeply poignant. This place is so rare, and so important to the city, as are other amazing public markets, in Detroit, Philly, and Milwaukee. Doubt their importance to the shape of a city? Have a look at the Project for Public Spaces, which formed to prevent Seattle's Pike Place Market from being demolished—yes, it was a breath away from being torn down. Just look at that place now!

I'll be cooking at the gala tomorrow night, my go-to East Carolina BBQ, with thanks to the indefatigable Greenhouse sous, Brian Goodman. Chris Hodgson claimed to be smoking the shoulders in the country's biggest smoker (he failed to post pix on Twitter, damn him). He'll be cooking, so will Sawyer, Michael Symon, Eric Williams, Paul Minnillo (Paulie's son, Michael, is the French Laundry's GM and unofficial mayor of Yountville—come back home, Michael!), and many more Cleveland chefs. Five of the chefs from the East Coast got so hammered by Sandy they've had to deal with their downtown restaurants and cannot be here. But the amazing April Bloomfield and Jonathan Waxman, one of America's culinary godfathers, will be here, as well as Chicago's fabulous Paul Kahan. These are three of my favorite chefs of all time, period, hands down, and Cleveland is lucky to throw rose petals at their feet as they stroll into our unsinkable city.

Thank you all, and Happy 100th Birthday, West Side Market, a genuine cathedral of food in the heart of this great country!