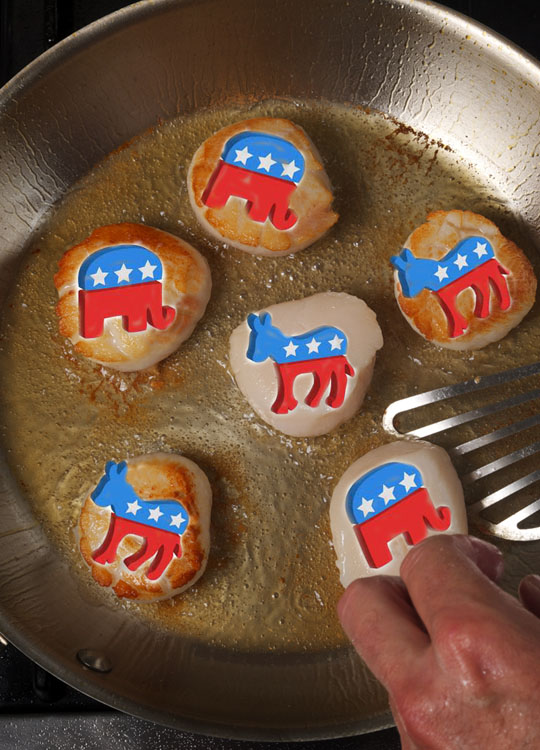 Last election, I put up a big "Vote Obama" post in light of what I considered to be eight disastrous years of Bush, unnecessary war, and an economy that was going to take well more than four years to fix. I was at first surprised by some of the angry comments I got. A reader named Art wrote, "You’re a consommate [sic] chef. Leave it at that. Keep your friggin’ political opinions to yourself," followed two minutes later by Joe: "Because you can cook, you can tell me for whom I’m to cast my vote? I don’t think so. Keep it in the kitchen—not the voting booth."

My response was more or less, "This site is my fucking yard and I can put up whatever sign I want." And this led to more comments, pro and con, but all in all it developed into a fascinating, useful conversation.

One of the things I love most about this blog is the people who read and comment on it. Passionate discussion—I love it. I never take down comments unless they’re gratuitously harmful. I welcome dissent, even when it’s anonymous (something I very much discourage because it so easily leads to meanness; I understand that some people must remain anonymous for one reason or another, but in this Internet age anonymity encourages snipers).

So I put this question to you, much-beloved readers: Is it justifiable for me, known and read primarily for writing about food, cooking, and the work of the professional kitchen, to voice my opinion on a matter unrelated to food? (Although now that I put it that way, I wonder is there anything unrelated to food?)

Thank you all for the comments; as always they are uncommonly thoughtful and that is the biggest generosity of all. I've decided to give two books away because I couldn't decide and it seemed more bipartisan that way. I have no idea who's winning today's presidential election, but the following have won a copy of Ruhlman's Twenty:

Asking others if it is “Justifiable” is an odd way of thinking about it. You of course have every right to express your non-food opinions here and anywhere else. But you have to realize that by doing so you can alienate some perhaps large proportion of your fans and loyal readers. Is it worth it? We readers can’t answer that; we don’t know how important these issues are to you, nor do we know how important we fans are to you. Maybe you feel so strongly about the issues that it doesn’t matter to you if you alienate half of us. Or maybe you couldn’t care less about the half of your fans that you alienate. Those are balances that you have to weigh – we can’t do it for you. You have the great fortune to be able to have your thoughts read by many thousands of people. The flip side is that you can chase some of those people away – do you care if you do just to tell us who you think we should vote for? It’s not a question we can answer for you.

Freedom of speech is a guaranteed right under the Constitution. That certainly includes what you express on your website. Readers are equally free to ignore, agree or disagree with your opinion. As you point out, there is a great deal at stake in this year’s election. So in addition, to your urging us to “pay attention and vote”, I would also add, “stay informed”. Ignorance is a dangerous thing in these complex times.

Your site, your voice. Sure…. But in addition, you graciously share your site and let other voices speak too — guest posts and comments for example. That you choose most often to give voice to matters of food is your fault not a blogosphere rule to be policed. That you occasionally voice matters regarding alcoholic beverages is charming. That you less occasionally give voice to broader issues like writing, travel, and politics… well, you initiated the blog, you spend the time writing the posts, you decide. Is this blog yours? Not entirely since you share it. It is in many ways a co-created site between you, your s.o. (nice photos!), and each of your readers all together. I think you do anticipate us readers on occasion and so we make our way into your thoughts and your prose. But does that mean one person can walk onto the site and dictate that “Only shall food matters be writ about here!”? Well, that is a tad silly. A point which I believe the above scallops make admirably.

I now think I was wrong four years ago to title the post as I did. No one should tell you who to vote for, or how to live your life. It should be your choice. But you do have to act in order to keep it that way.

I also believe it’s fair for me to express my opinion about political issues, generally—you can read them or not. Importantly, Proposition 37 in California is a no-brainer. Do you want to know what’s in your food? Or do you want big companies who, let's be honest, don’t really care about your health, to prevent you from knowing what you're eating? Vote Yes on Prop. 37. It’s not just an important food issue, and it's not about whether GMOs are good or bad (on which the verdict may be out for decades to come). It's an issue of our democracy, establishing a transparent food system.

I believe that no matter who wins the presidential election, the economy will get better because America is a growing country, an open, productive society. Therefore, the issues I care about are these. Please stop reading here if all you are interested in is the above sautéed scallops (plenty of oil, high heat, season just before sautéing, goes beautifully with asparagus ... or hmm, how about butternut squash?).

I believe that our government needs to encourage and help small businesses innovate and grow (speaking as one myself).

I am for less war (and less money spent on making it).

I am outraged by anyone who believes they can tell any woman what she should do with her body. I don’t even think people should legislate what you eat, let alone decree on more permanent, um, issues. (As a woman near and dear to me put it, tell them they have to pay for the child support and see how they vote.)

I am appalled by the intransigent Republicans in the House of Representatives who have prevented important issues such as the Farm Bill from moving forward. That the Speaker is from Ohio just adds salt to the wound.

Obama has not done all that I’d hoped he’d be able to do, though he said from the beginning he had an 8-year not a 4-year plan. He is not the smooth negotiator Clinton and Reagan were, nor the bully that LBJ was. But, if it matters to anyone, I’m voting for Obama, and am praying that my state of Ohio, which on Wednesday at last returns to “flyover” status, carries him. He's doing the right things and surely four years of experience as President of the United States will make him better at it than he has been (and he's done much good—ending a war, cutting taxes for my family and other middle income folks, working toward affordable health care, to name a few small matters).

Romney has shown that he will say just about whatever he has to in order to gain votes, and I simply don’t trust what he says. He hasn't convinced me that he possesses the wisdom required to lead a country of this size and power. If I owned a Fortune 500 company, or even a company that did $100 million in sales, or if I personally were extremely wealthy, I might be inclined to vote Republican (in which case I, personally, would have to admit to having a corrupt soul). That said, two of my dearest friends are solidly middle class, one of them a small business owner himself, and they will be voting for Romney, Lord knows why. My Boston-based copy-editor Karen notes that her state, which elected Romney governor, will surely trounce him in the election. That means something to me.

Here’s what I will tell readers and feel justifiably content in doing so: pay attention, and vote. And then think about how lucky you are to live in a country where this, along with free speech, is not only allowed but encouraged.

Again, it will be my honor to sign and send a copy of my cookbook Ruhlman’s Twenty: 20 Techniques, 100 Recipes, a Cook’s Manifesto to the best comment (pro or con) on whether a food writer should voice non-food-related political opinions the way other non-food people do (e.g., Eastwood and Springsteen, who have just a teensy bit bigger audience than I do).

Why am I giving away a cookbook? Because this I know: the world is better when we cook food for the people we love.