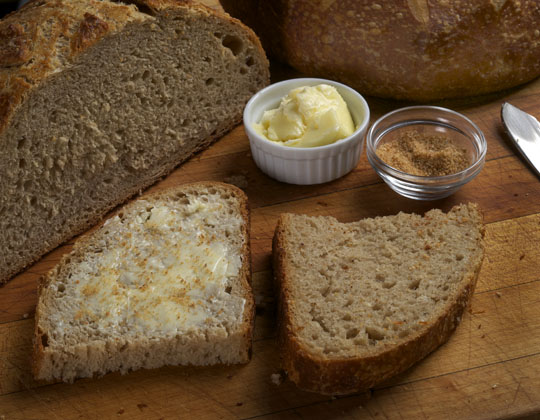 My second pick for innovative use of veal stock came in from Marc Barringer, Chef/Hopsitality Director, St. Michael's Episcopal Church, Grosse Pointe Woods and  Food Service Director, Lost Lake Scout Reservation, Freeman Twp., Michigan. He's also a freelance writer, innovative cook and classic jack-of-all-trades in the best cooks tradition (still a school crossing guard! God bless him!).  Veal stock is one of the great preparations of the kitchen that can elevate everyone's cooking, and someone on twitter asked me what you could do with it. It lead to a lot of great ideas, in addition to the traditional uses for making sauces and enriching braises.

Read the story of how Marc came up with bread—it's classic innovation from the restaurant kitchen.  I love it.  And I love the bread.  Donna loves the bread. James loves the bread. It's got a deep complex bread flavor without being overpowered by the stout.  It's fabulous simply with butter and veal salt. —MR

I've worked in and out of the food industry since I was a teenager in the 80's. Worked at every back of the house position in many different restaurants. I've also worked as a portrait photographer, technical writer, outdoor recreation equpiment tester/salesman, and am still a school crossing guard.

My adventures in bread began in college. A recipe for Tuscan Bread in Esquire started me baking in a common dorm kitchen in 1987. The sunday night loaf became an event enough that it helped grow a common meal group that lasted years. It also led me in the direction of all yeast breads and cinnamon rolls. I also participate on the Fresh Loaf website and tease the folks at Zingerman's Bakehouse.

The genesis of this bread was at Toast, a restaurant in Birmingham, Michigan; where I was hired as part of start-up crew. We were taking an established breakfast and lunch restaurant from Ferndale, a bohemian part of town and opening the second location in a seriously upscale area; plus we were asked to create a dinner and full dessert menu. I had room to play a bit and make up breads and desserts that went along with the chef’s and owner's vision for the menu.

I was in the kitchen making cinnamon rolls for French toast and the bartender came in complaining about the Guinness tap being a bit foamy. I went out to the bar with a measuring cup and pulled a bit more than a cup of Guinness, just to see how bad it was. I retreated back into the kitchen and let the Guinness sit out while I was scaling the rest of the ingredients for the baguettes.

When it came time to start making the bread, I was struck with an idea; I added the beer. I just added what I knew would be good. Within this moment I knew I needed more liquid. More beer? Just then the sous chef asked for the veal stock from the fridge next to me. We used a lot of veal stock in our dishes because it is a great way to add depth to them. Why not use it in bread? I warmed up what I needed and made the bread with veal stock. That was the start of the veal stock and Guinness bread.

The bread is just a variation on the Ratio 5/3 ratio of bread flour and liquid. I also use sourdough starter in almost all the bread I bake, even if I am adding instant yeast.

Now, due to a couple of factors, you may need to play with this a bit:

And by all means, let the dough rise as long as prudent. The super-long rises of the “no knead” breads takes this bread in deep flavor directions. The enzymes loose in the mix have so much more to work with. If you were using the Dutch-oven baking method, the crust would be even better.

Makes two baguettes or a good sized family boule. (Not quite enough if you have teenagers in the house)

If you liked this post on veal stock & Guinness baguette, check out these other links: