I've spent nearly a week in the Napa Valley working on the Bouchon Bakery Cookbook.  This will be the fifth book in a series led by Thomas Keller that began with The French Laundry Cookbook which is one of the best chef-restaurant cookbooks ever (do we need full dislosure here?). Forget the words I write—these books are truly fine and costly productions, and I think it's important for people to know what goes into books of this magnitude, because so often people don't know.  A team of people, from the many at Artisan, an imprint of Workman Publishing, who make beautiful books, to the commis at the restaurants who scale out the mise en place for the recipes for the chefs, and all those in between, including myself.

In 1997, I flew out here to have dinner at the French Laundry and meet Chef Keller, who wanted to write a book. I'd just finished writing Making of a Chef, but was completely unknown in the food world. And I know everyone who's been integral to all the books feels as I do—we're really lucky to be a part of them.  The photographer Deborah Jones; writer, cook, and tester Amy Vogler; Chef, of course; Susie Heller, who's not only one of the writers and testers but who is the conductor of the team; and the restaurant chefs Jeff Cerciello, Corey Lee, Jonathan Benno, Sebastien Rouxel, Dave Cruz, and all the chefs they relied on.

In an effort to acknowledge the team nature of the books, I'm posting a few pix from my spot within the scenes of The Bouchon Bakery Cookbook. While the primary author and force along with Keller is Bouchon Bakery executive chef Sebastien Rouxel, a substantial piece of the program is bread baking, and Matthew McDonald is the bread guru here. It was my work this week to understand bread baking so that I can write about it from Chef Matt's vantage point. And on behalf of the book, it was Matt's job not only to bake bread for the photography scheduled but to teach me what he knows so that I and Amy and Susie can write it.

Bouchon Bakery chef, Matthew McDonald, transfers a baguette from a linen couche to a transfer peel, to the loader; he then scores each before shooting them into the deck oven and hitting them with steam. (All photos by moi, please forgive me, it's the best I can do, not my forte.)

There's a madness in the impossible quest to bake the perfect baguette, that universally adored, infinitely nuanced combination of flour, water, yeast, and salt. Great bread is an extraordinary balancing act. I spent my first day here, just watching Matt work and asking him questions (how lucky is that?). 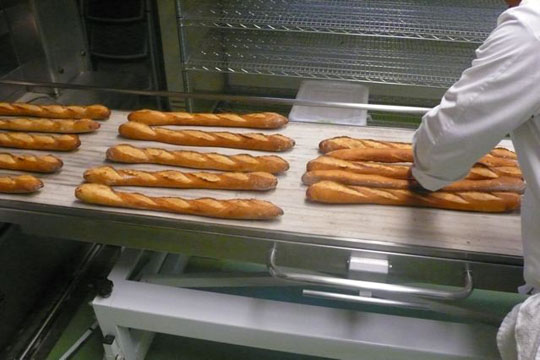 Baguettes hot out of the oven; these are about as good as baguettes get in America (or France for that matter).

Finished baguettes, a dozen of the 800 or so the bakery will make each day. 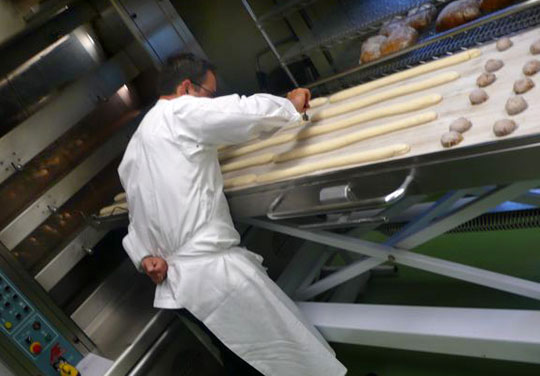 Notice the hand behind the back, a habit from competition baking in which touching the dough you were scoring meant points off.

The epis are loaded into a basket and run next door to the bistro Bouchon. People who crowd the small bakery's retail space press their faces up against the glass to watch Chef Matt cut the epis, baguettes, snipped to resemble wheat, resulting in long sticks of delicious crunchy bread rolls

Hanging out in the bakery was just part of the process, my seeing the bread in porduction.  What began on Tuesday was the photography for the book, truly remarkable images from the amazing Deborah Jones (most of the chefs who have worked on these books preface her name that way).  And what happens for Deborah is pretty amazing, a real production requiring many people and rigorous organization, particularly given that what was being photographed was bread dough.  Bread dough cannot be rushed and it waits for no one. 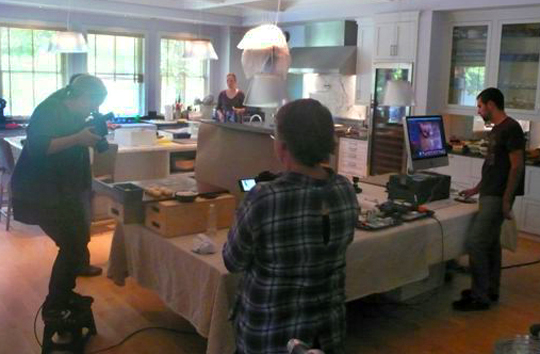 Most photography happens in Susie's kitchen; here Deborah shoots some shaped rolls; her camera is tethered to the iMac scrutinized by her assistant Josh. Susie is shooting video of Deb, and I'm shooting Susie. A multimedia world. 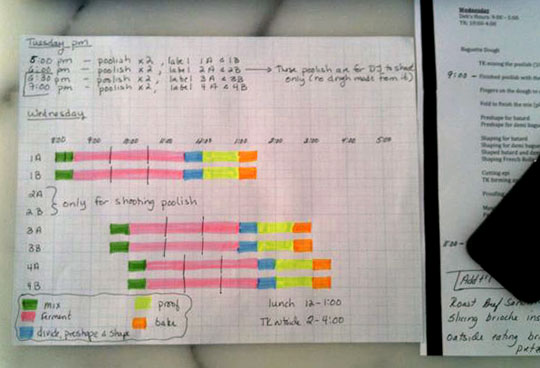 Amy Vogler is heroic in her organization and has mapped out times for the mixing, fermenting, proofing times for all the doughs so that they'll be ready to photograph. 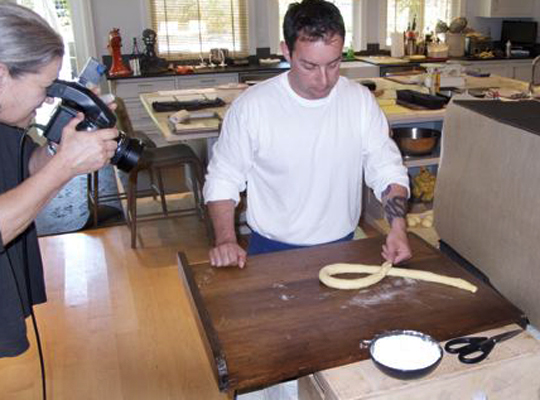 Chef Matt demonstrates a single-strand braid with a brioche dough; one of the goals Deborah is aiming for is process shots that don't look or feel like process shots, images that are beautiful but also convey the information needed to reproduce each bread. 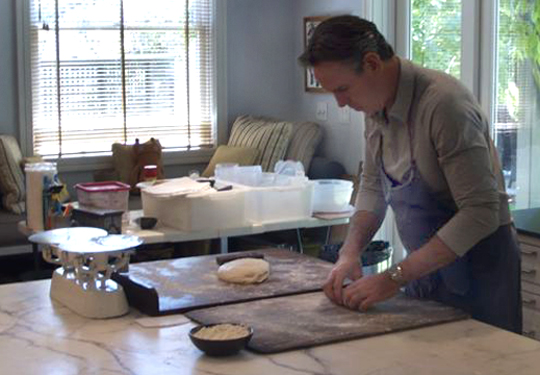 Thomas Keller, without whom none of this would be happening, portions dough for the camera.

The following are the books this team has made.

If you liked this post on Bouchon Bakery, check out these other links: