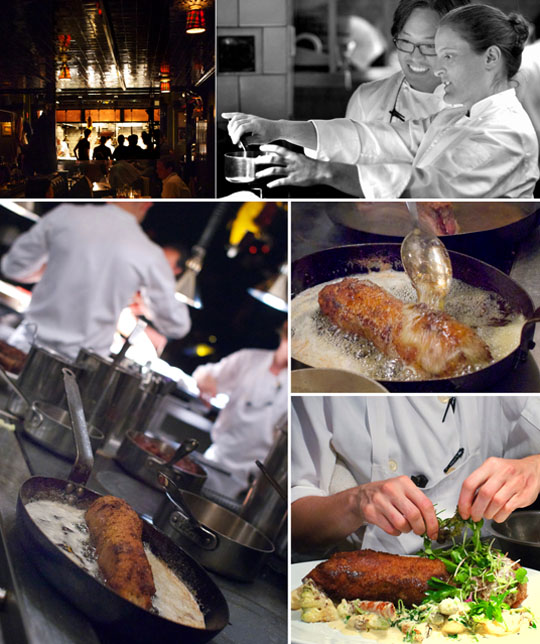 When Donna found herself in NYC at the Ace Hotel last fall, she spent a couple nights in the Breslin kitchen watching executive chef April Bloomfield, Breslin chef de cuisine Peter Cho, and crew rock (that's Peter and April top right). The trotter caught her eye.  It's the perfect example of why this post could be called Why April Is Not the Cruelest Month But Rather the Best Porker, or simply Why We Love April.  The British chef takes a great Italian classic, a zampone, as she notes, breads it, fries it in olive oil and butter, and serves it as their "Pig's Foot for 2."  It's the boned out trotter, stuffed with cotechino, a pork and pig skin farce.  Peter says it's currently served with braised shallots, a garlic cream sauce, and sauteed Brussels sprouts.  But that changes with the seasoning.  I'd serve it with an aggressive vinaigrette, maybe a gribiche and arugula. (Donna created an Ace Hotel/Brelin series which you can see on her site.)

April has had this dish on the menu since Breslin opened.

"I'd always wanted to make cotechino," she told me.  "It's my favorite kind of sausage.  When I was a young line cook, I used to eat it boiled between slices of bread on my break.  Then I had the trotter at Au Pied de Cochon and it blew me away.  It convinced me to put this on the menu."

This is definitely a fall challenge for advanced charcutepaloozians!  Thanks, April and Peter for the recipe and Peter for your great iPhone process shots! 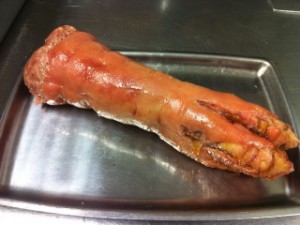 If you liked this post on stuffed pig's feet, check out these other links: