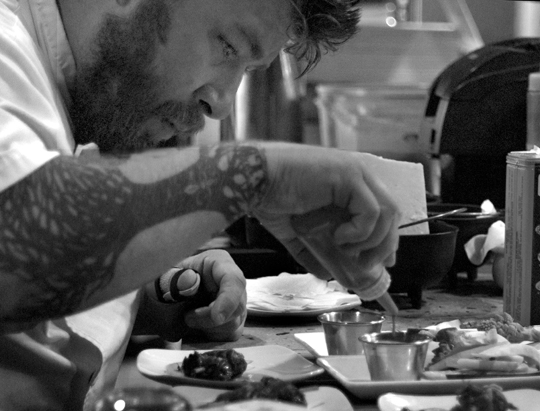 Is it passion? Desire? What is it? What should you follow?
Photo of Jonathon Sawyer by Donna Turner Ruhlman.

The word is passion and I used to hear it from chefs. "I can teach you to cook, but I can't teach passion," they would say. I took this at face value from so many chefs I can't tell you, until I didn't anymore because I realized it meant exactly nothing. Thomas Keller, the chef from whom I have learned the most, and the most by far, noted this a while back as well. Passion is the wrong word, he said. Desire was what he wanted to see in a young cook.

What, really, though, is that elusive quality that makes a great chef, a great musician, a great anything? It's not passion, and I'm not sure it's desire either. A lot of people have passion for something they aren't good at. In my twenties I was passionate about writing fiction and worked really, really hard at it. I had great desire to achieve, and did, after much bloodletting, complete two novels. But they weren't any good; my agent failed to place them. A lot of good passion did me then!

As I wrote in my recent Kindle Single The Main Dish, I had no desire to become a writer about food and cooking, and look at me now. And yes, I'm passionate about it, but it was directed by something Not Me. The journalist and author, Daniel Coyle, author of The Talent Code and The Little Book of Talent, asked on his always thought-provoking blog, should we follow our passion? I hear this advice given a lot, especially in the food world, "Follow your passion." Coyle says this is really bad advice. Because the fact is, for most of us life is difficult, we're faced with myriad choices, and few are born being passionate about something specific.

I learned to write because I did it for 20 years—I just did it, though I wasn't very good at it for a very, very long time—and then I figured out what made a sentence, then a paragraph, then a story work, and then I learned to write hard and fast and well because I was terrified. Let me tell you, people, fear motivates. Fear of poverty, fear of working in a cubicle. I learned to cook first out of hunger—literally. I was hungry, alone, and I liked to eat. And then I learned how to really cook out of anger. I didn't learn to cook because I was passionate about cooking. See aforementioned Main Dish for details (you can download the Kindle app, btw, on your non-Kindle device).

So what is it that makes Jonathon Sawyer at his Greenhouse Tavern such an exciting cook, someone who combines foie scraps and clams for one of the best/simplest dishes on earth, and who wraps pork in donut dough and deep-fries it ("Sloppy Jonut" it's called)? Those cooks out at Animal, same deal. 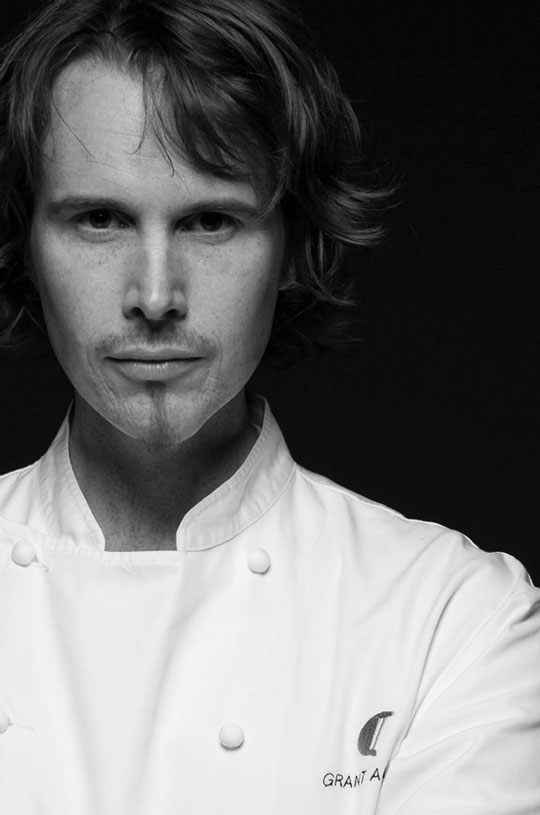 Or Grant Achatz, what is it that pushes him to create some of the most far-out dishes in America? (What was that weird red, flag-shaped centerpiece, smoking on my table at Alinea? By the time this nitrogen-frozen slice of beef had melted, it was ready to become part of dish number 9 in a 26-course tasting meal.) Alinea is not for everyone. I have good friends from Cleveland who actually went to a McDonald's after eating at Alinea, they hated it so much. Here's an important fact: Grant doesn't give a shit. I mean he wants to please his customers, but that's not why he does what he does.

Monday night I went to see one of my heroes, Neil Young (thank you, Joseph Daniel Sullivan, for the tickets!) playing with Crazy Horse, which is a goofy garage band of AARP 13-year-olds who can still, after all these years, rock the house. Neil Young. Remember those pink suits and Trans? God, some real disasters in a career that also produced timeless albums I don't need to mention, as well as lesser-known classics such as On the Beach, Zuma, and Time Fades Away, a fabulous album I can't find anymore.

It was fantastic to see Old Neil grinding and cranking in a 66-year-old body, a bit of a potbelly hanging over his jeans, a serious turkey waddle, and singing in that voice that hasn't changed in 40 years and with an energy that had the whole crowd on its feet for "My My Hey Hey." The guy is still rocking, hard.

I'll cut to the chase: All of the folks mentioned above did what they had to do before passion had anything to do with it. They did something and opened themselves up to passion. Passion flowed in behind the work. They did what they had to do first. Neil Young does what the fuck Neil Young wants to do, and fuck you all if you don't like it. Do you think Grant cares that a lot of people think his Modernist cuisine is too ridiculous for words? No—and he'll point those people to the nearest Cheesecake Factory and get back to work.

When I was out at the French Laundry in 1998 where Grant, who at the time looked like he was in fifth grade, worked the fish station, I asked Keller what he wanted this book, The French Laundry Cookbook we were working on, to do. We were all, me most of all, trying to figure out what the hell I was doing out there hanging out in the kitchen. He said, "I want it to inspire people."

He was right about that, like so much else. Inspiration. That's the "it" I was looking for when I sat down to write this post. I didn't know what "it" was 30 minutes ago, but now I do, because writing is how I figure things out. But it's not inspiration that I want those young people emerging into adulthood to hear, and it's not passion; that's not what I want to tell my 17-year-old daughter who has no idea what she wants to do with her life. And I'm certainly not going to tell her to follow her fucking passion. I couldn't give anyone more useless advice.

What will I say to her and to anyone who will listen? This: Everyone has the capacity for passion built into them, it's part of being human. You need to set yourself up to receive inspiration. Be ready to let inspiration flood into you. Be ready for it, because you never know when it's going to come. You can't make it happen. You can't will inspiration; maybe you went to the wrong station and the train never shows up, and then you die. Happens. No guarantees. But odds are if you work really hard, it comes. You move through this life, making hard decisions, trying to hurt as few people as you can, trying to have a good time, trying to pay the bills. Just make sure you're ready. We make our own luck by showing up, working our asses off, and then, out of nowhere, something that is Not You lifts you off the ground.

Other links that aren't really related but are good anyway: