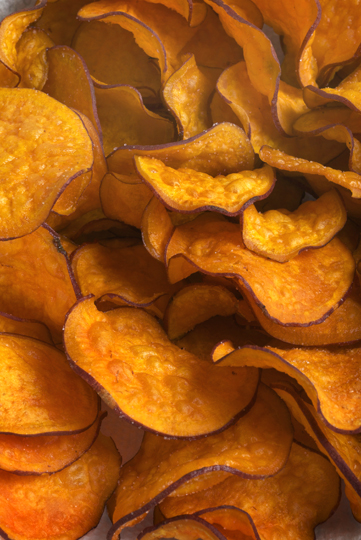 Sweet potato chips beat potato chips by a mile.  I hadn't cooked these in years, which is a real shame—so many missed opportunities for pleasure! Sweet potato chips are dense, flavorful, nutritious, and compulsively eatable. They all but jump into your hand without your being aware of it. I mean look at them.  Are they not a picture of fall's beauty? They were to Donna, who, spotting them as I cut up the roasted chicken they accompanied and got off this quick hip shot before they cooled.

So good, so easy.

If people are in the kitchen with you, set them out to eat immediately while you cook the next batch.  If you're serving them with a meal, put the bowl in a 200 degree oven while you do the next batches.

These are real treats.  So try to make them as much as possible before you die.  I'm forty-seven and I'm starting now.