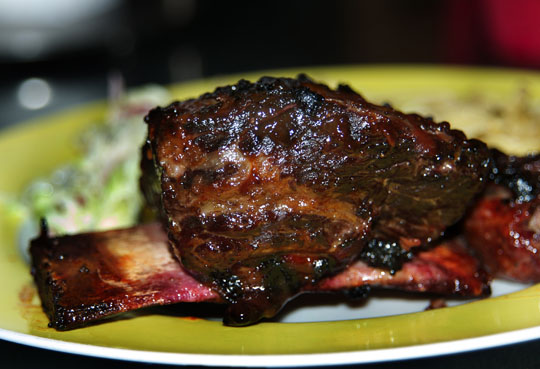 It requires a certain amount of stress to cook for a lot of people. Otherwise you won’t get it done. Too much work, and therefore too much focus and efficiency to both get everything done and also enjoy yourself. You’ve got to like this very peculiar kind of stress.  Or like the release that inevitably follows. And it’s not the same kind of release as it is for the guy who, when asked why he’s banging his head against the wall, responds, “Because it feels so good when I stop.”  But it’s close. You’ve just got to have that kind of love-the-pressure, love-the-release to cook for a lot of people night after night. If you do, you can make a good and happy living as a cook and maybe chef-restaurateur.

Me, I really only liked the release part. During my very brief time as a line cook, I dreaded Saturday night. One of the worst nights of my life, I will never forget it, everyone in the restaurant wanted the grilled strip off my station. I could even glimpse the other two cooks sort of shaking their heads and chuckling as Paul shouted, “Ordering: Eight steak!  Two rare, three mid rare, two medium, one well! Firing five steak.  Pick-up: thirteen steak!”  And then later I’d glimpse the other cooks no longer chuckling but more or less wincing as another waitress breezed in and out and Paul read the ticket, “Ordering: one salmon (my station), one halibut (my station), one pasta, two steaks mid rare, three steaks medium.” At one point, when Paul, disgusted, had to come back and throw wood on the fire—“Jesus Christ, your fire almost went out, don’t let your fire go out, man”—I looked up and all I saw were grilled steaks everywhere and I had no room to work.

This is called having your ass handed to you.

As I was wiping down my station after it was all over, Paul leaned in between the service shelves and stared at me with his lazy bloodshot eyes and asked, “You want to come have a drink with us?”  It surprised me.  I thanked him, but I wanted to go hate myself in private.

All of which is a long winded way of explaining why cooking for twelve to sixteen people is something of a breeze.  A lark, really.  At least once I get going.  Because I’ve already stressed ahead of time enough to be totally prepared.  And I knew some of the sailors loved to cook and would help.  And everyone would be drinking, and therefore, forgiving.  So not only did I have time to write in the morning, I had time to enjoy the cooking and the eating.

And I really love to cook for people.

Here’s the Key West Race Week 2012 Menu.  Next up, equipment and strategy.