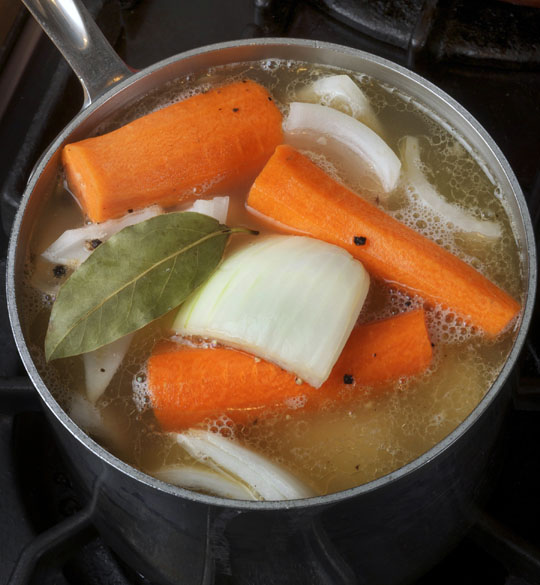 Last April, I wrote a post about leaving stock out on the stove top claiming that it would be safe to eat provided that you brought it to a simmer before eating. Indeed I've been doing this for a decade with no ill effects. On twitter and on the post itself, I received voluminous responses. One response, from a large-animal veterinarian, noted that it was entirely possible for heat-stable toxins, not bacteria, to persist, making the stock unsafe. I revised the post with the vet's valid warnings with links to the CDC's warnings on the particular bacteria.

But the response was so strong, I suggested in an email to NYTimes food section editor Pete Wells, that this would be a great story.  I've left stock out on the stove top for up to three days because it was convenient, simmering once every 24 hours, but I'm not scientist or a bacteria expert? Really, what are the dangers? On the one hand, I've been doing this for years. On the other hand, I've done enough reading about the bacterium that causes botulism to know about how difficult spores are to kill and that they can indeed lead to food toxins that can make you sick, particularly in low-oxygen, protein-rich environments, such as the inside of a sausage, or a stock pot.

Wells asked food science authority Harold McGee to address the issue, and he does so head on in today's NYTimes in an article headlined "Bending the Rules On Bacteria."   In it, he writes that leaving stock on the stove top for up to three days is in fact a risky procedure, boiling or not.  It's not the bacteria that are the issue.  Bringing stock to a simmer will indeed dispatch them.  But some spores, not killed by boiling temperatures, can hatch bacteria, which, over time, can multiply and produce toxins that are not killed by boiling temperatures and can make you sick.  So I hereby stand corrected and am glad Wells chose McGee to address the issue so thoroughly.

To clarify what McGee writes in his article (he relies on O. Peter Snyder, a veteran food scientist and consultant to the food-industry, for expert testimony), while many of the government recommendations regarding food safety are overly conservative, caution is always advisable.  I have never gotten sick from stock I've made, and I would never be stupid enough to leave cooked food out at room temperature for three days and then eat it.  And by simmering it the next day, as McGee himself confesses to doing, before chilling it, I feel comfortable serving it, I would now suggest that after bringing the stock to a boil the second time, that it's best to strain and chill the stock rather than to leave it out.  I hope it's obvious that from a flavor stand point—that is if you're not being lax during a busy work week, or contending with a stuffed refrigerator—it's best to strain, cool, and chill stock (or any food that you're not going to eat right away) immediately, the sooner the better.

McGee notes that even playing fast and loose with the rules with stock, provided that it's boiled, it's impossible to say what the odds are regarding food sickness: "What are the actual odds of getting sick from casual food handling at home? No one really knows. There are many variables involved, and only a small fraction of illnesses are reported, even to a family doctor, since they’re usually brief."

Interestingly, though, with rice and other starchy foods, McGee notes that the dangers are very really and very serious indeed:

"In 2008, a 26-year-old Japanese mother in the Osaka region shared a meal of leftover fried rice with her two children, ages 1 and 2. She had prepared and served the rice the day before and kept it at room temperature.

"All three became ill 30 minutes after eating the leftovers, and were hospitalized. Both children lost consciousness, and the youngest died seven hours after the meal. Pathologists later reported in the journal Pediatrics that the rice contained a very common spore-forming bacterium, Bacillus cereus, along with a heat-resistant toxin that the bacterium tends to make on starchy foods, and that can cause vomiting even after being heated to the boil."

And as I write this, I recall that the animal vet mentioned above, in supporting the conviction that food left out can make you sick, noted that he had recently become very ill after not reheating a stir-fry enough in the microwave.  Apparently, even hammering the rice with heat wouldn't have made it safe.

In an email yesterday, McGee noted something else: "One thing I've found that didn't make it into the piece is that people are discovering new microbes and toxins all the time—there are a half-dozen Bacillus relatives that make heat stable toxins, but they haven't been studied enough yet to know how common they are, what foods are most susceptible . . .  all of which I think argues for general caution. Again, we think we know more than we really do."

Ok, enough lecturing. All the above wouldn't have been worth the trouble except for one fact: homemade chicken stock is an amazing thing, not only a great ingredient but a great tool that can transform your cooking.  And it's not necessary to make a major project of it. Make just a little. The following is a recipe and pix of how I make small batches of chicken stock all year long. It take minutes of actual labor, not hours. And it's a wonder.

Having Made And Consumed the The World’s Most Difficult Chicken Recipe here's what you do: 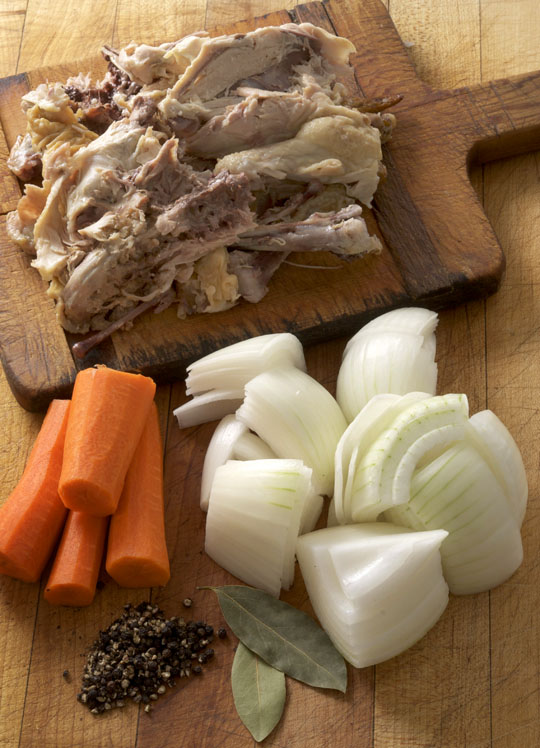 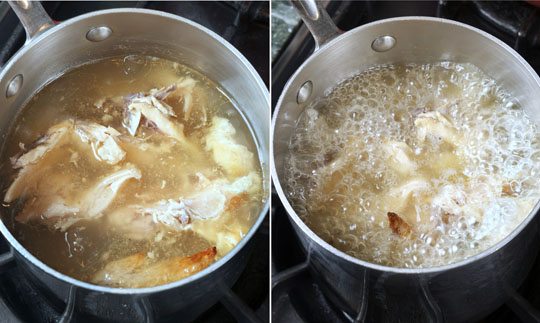 The stock on the left is cooking at the correct temperature, 180˚ F. or so—too hot to touch but not simmering. Don't boil it! Stock on right will be cloudy and have a lower yield. There are reasons you might boil stock, but generally it's not good practice. 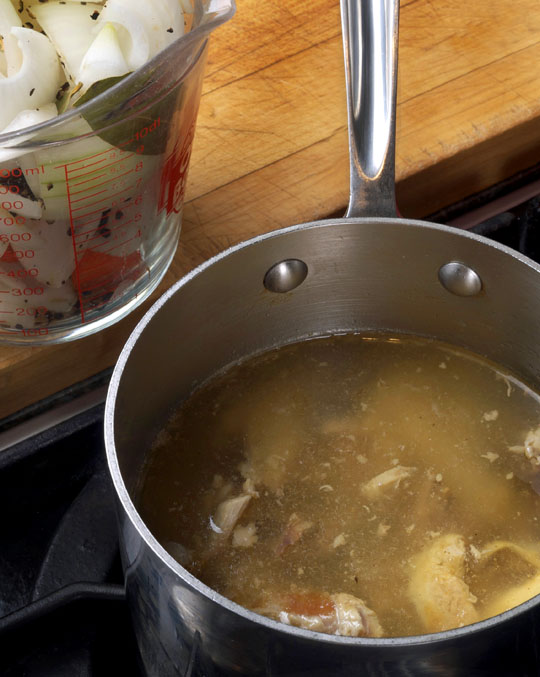 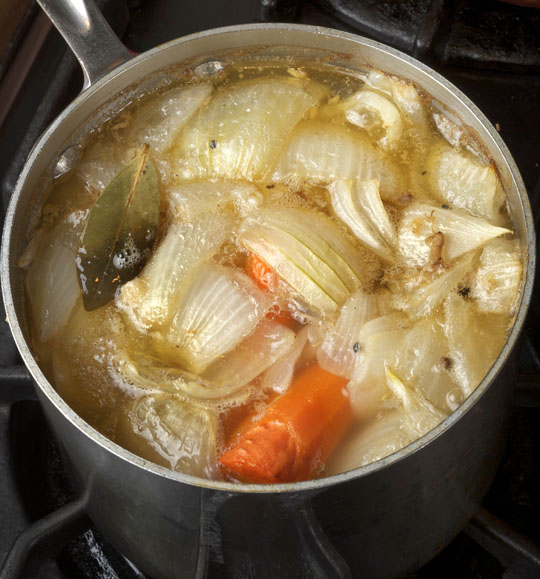 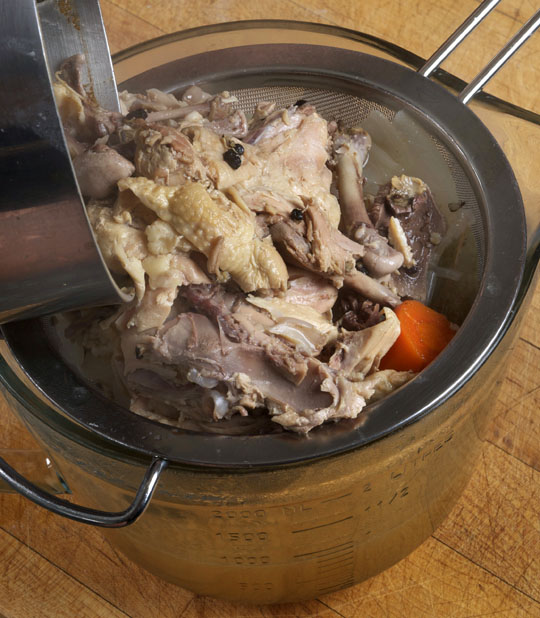 If I will be storing the stock, I strain out all the bones and veg into a 2-quart measuring cup. 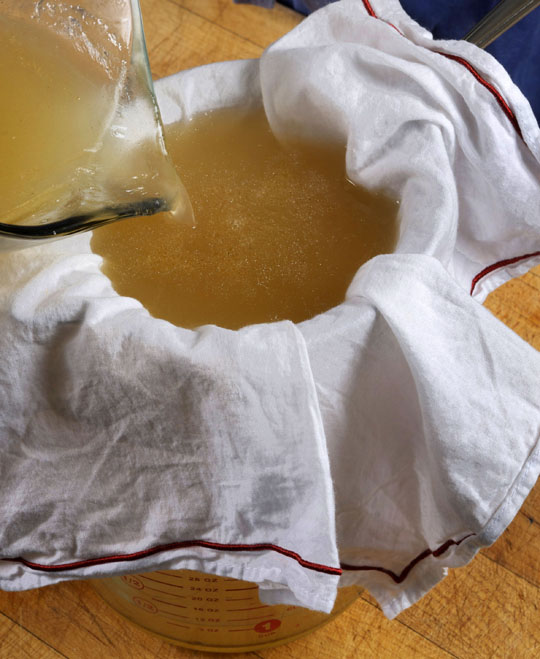 When I want my stock very clean and refined, I strain it through a cloth. 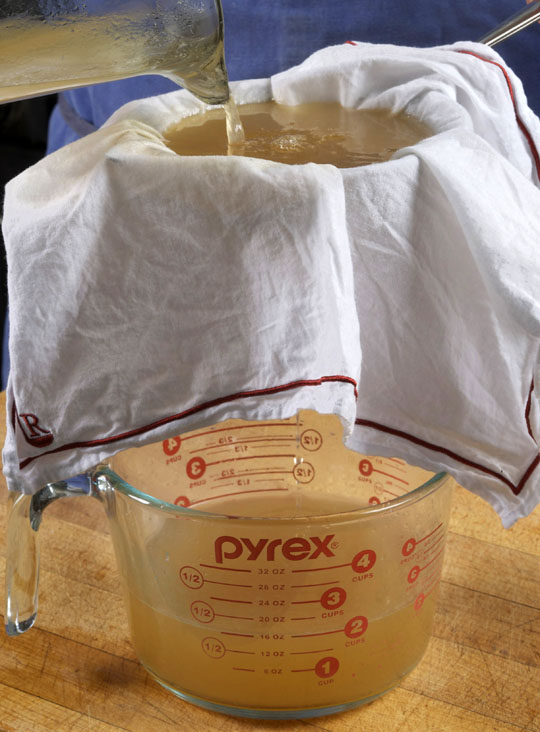 One chicken carcass and veg give me about a quart of stock. When it's chilled, remove the layer of fat congealed on top. It will keep in the fridge for a week, frozen for several months.

If you liked this post on stock, check out these other links: