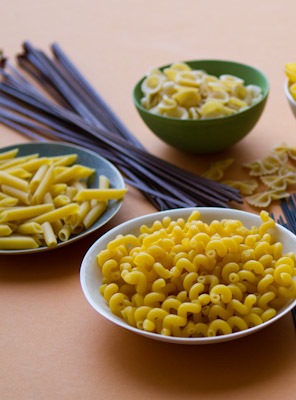 Oodles and oodles of boxed pasta. Photo by Stephanie Stiavetti.

Stephanie Stiavetti (@sstiavetti) writes The Culinary Life blog. Her first book, Melt: The Art of Macaroni and Cheese, will be available October 22 from Little, Brown, and it's superb, the best one I've seen, in fact, accept no imitations!

You've heard Michael's spiel on Americans being trained to believe they're too stupid to cook. It's an unfortunate reality that people in this country place a higher priority on time than they do nearly everything else, which greatly affects what we eat. Which affects our health. Which, in the end, affects EVERYTHING. When you eat poorly, guess what? You feel poorly too. You don't have the energy to do the things you want to do: hitting the gym, playing ball with the kids, actually getting up to go to a movie instead of streaming Netflix while lolling on the couch. All of those things feel like too much effort.

Hey couples: have you noticed that either (or both?) of your libidos have gone down the tubes? What do you two eat everyday? Might want to look into that. Just sayin'.

A few months ago I ranted about cheese, and today I'm compelled to go off on cheap boxed pasta. To be clear: there's nothing inherently evil about cheap pasta. If you throw something healthy on top of it—like a freshly made pesto, perhaps—then boxed pastas are leagues ahead of countless other things you could be eating, but if you're at all interested in spiffing up your diet to include high-quality carbs, then that sub-$1 box of generic elbow macaroni might be a good area to investigate.

What's the primary issue with cheap boxed pastas? As you might have guessed, it's made from cheap grain. Large-scale pasta operations produce their wares in huge factories, and these factories need to be fed enormous amounts of wheat to churn out 734,387,632 pounds of noodles a day. Do you know any small-scale farmers who can produce quality grain in that kind of quantity? Probably not.

With only a few exceptions, the wheat used to make industrial-made pasta is generally of mass-produced, hybridized (see my comment below on GMO versus hybrid) stock, before it goes through a dizzying amount of processing to get it down to the gossamer white powder we're so used to eating. Some experts go so far as to say that a lot of the wheat produced these days is not nearly as healthy for you as heritage varieties, which are locally produced on a much smaller scale.

Then there's the taste and texture issue. Crappy pasta tastes, well, crappy when compared to higher-quality noodles, due both to the lame wheat used and to the fact that it's made on industrial equipment that does not produce the proper texture. YES, the surface of pasta is meant to have texture. What do you think the sauce is supposed to cling to? Have you ever tried pouring marinara on the windshield of your car? How much sauce would actually hang out on the surface, versus the amount that ended up in a puddle at the base of your windshield wipers? Exactly. Please, for the love of god, avoid super-smooth noodles that could be buffed to a glassy shine. You're missing the whole point.

Now, there's a lot to be said for small-production, artisan-made boxed pastas, which often tip the scales when it comes to flavor, texture, and ingredient quality. Brands like Rustichella d'Abruzzo, Cipriani, and Baia produce some excellent varieties. When cooked correctly they'll sing at the touch of even the simplest sauce, making for a veritable triumph at your dinner table. To take it up yet another notch, many major supermarkets have started selling fresh pastas in the refrigerated aisle, which will give you an even better experience than industrially-made dry pasta, but at that price point, it's better to make it yourself.

Wait, what? Make it yourself? You heard me. So many folks believe that making pasta is a huge undertaking meant for only the highbrow culinary elite, but that's just not true. Homemade pasta is relatively quick to make and it's insanely cheap. Seriously. All you need is some flour and a couple of eggs. And when made in quantity it freezes beautifully, perfect for those "quick & easy" meals Americans love so much.

So how do you go about making pasta? Well, you'll have to wait for my next post to find out what I've got to say about that.

**When I referred to genetically modified wheat, I was using the term in its literal meaning to indicate that the wheat in our food supply has been highly hybridized to maintain/improve certain traits. So those taking issue with my use of GMO are correct, if adhering to the widely adopted meaning of the term. While our wheat has not experienced a "direct manipulation of its genome using biotechnology," (please excuse the wikipedia explanation, but it was the most succinct for this addendum) it has indeed undergone changes on a genetic level, via hybridizing, to alter its characteristics. We're modifying the article so that the wording is more clear in the public understanding.

If you can't wait for Steph's post, which will surely be more than a simple recipe, take a look at these links: