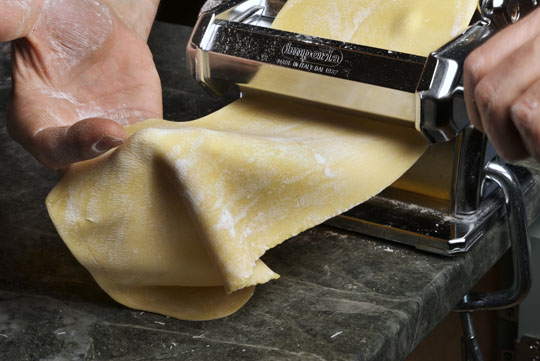 Rolling out homemade pasta dough (because I love the photo; the post is about store-bought dried, what we most often use). Photo by Donna Turner Ruhlman.

Stephanie Stiavetti (@sstiavetti) writes The Culinary Life blog. Her first book, Melt: The Art of Macaroni and Cheese, will be available October 22 from Little, Brown, and it’s superb, the best one I’ve seen, in fact—accept no imitations!

Her last guest post was something of a rant, which I'm always in favor of! This is a lovely primer on something we do often but tend to ignore the finer points of, boiling pasta, and to me, the finer points are what make cooking fun  Take it away, Steph! —M.R.

A few weeks ago I talked about the demerits of cheap pasta and left you with the notion that artisan-made dry pasta is leagues ahead of its tasteless, texture-less, mass-produced cousins. It’s also worth noting that cooking dry pasta is an art in and of itself; while it's a simple process, there's still a high margin of error.

Since I just wrote a whole damn book on cooking with pasta I thought it might be useful to spell out the best way to prepare dry pasta, so even if you're cooking with the cheap stuff you'll have the best possible eating experience. I still argue that the best pasta is that which you make yourself, and we should be covering that in the upcoming weeks. For now, here's a few tips to get the most out of dried pasta. Pop quiz: How long has that box of noodles been sitting in your cupboard, anyway?

Step 1: Boil some water.
This might seem like a no-brainer, but a lot of people get tripped up on this step and it's downhill from there. You want the pot of water to be large enough that the noodles can float and bob freely, bumping into each other as infrequently as possible to prevent sticking and clumping. If you cook your pasta in too little water, the noodles will stick together into a gummy, half-cooked mess. The minimum amount of water you want to boil your pasta in is one quart, and that's the amount you’ll need for just two servings of noodles. Large quantities of pasta will require an even bigger pot. Don't be afraid to bust out the stockpot if you're feeding a large group.

Step 1.5: DO NOT add oil to the water.
Half of my family adds oil to their cooking water because they believe it prevents the noodles from sticking together, but it's just not true. When you add oil to water, it floats on the surface. That's it. Any oil that does grab the pasta will do nothing but slick it up. You actually want some sticky starch on the surface of your pasta so that sauce clings to the noodles.

Step 2: Salt the water.
Salt is very important when preparing pasta. It does a lot to bring out the flavor in both the noodles and your overall dish. After you've tasted pasta cooked in well-salted water, noodles cooked in plain water will taste bland, bland, bland. Iodized salt should be avoided like the plague—it lends an icky, almost metallic flavor to anything it touches. Instead, use kosher salt or natural sea salt.

Side note: If you don't believe there's a difference in the two, taste a dash of sea salt and then follow it with a dash of iodized, spending a few seconds to let each roll around your tongue. You might be surprised at the difference in flavor.

Do not add the salt until the water is at a full, rolling boil. Salt raises the boiling temperature of water, which will affect how well your pasta cooks. Bring your water all the way to a rolling boil, add the salt, and then bring the water back to a boil before adding the pasta. Make sure to stir the noodles for about 30 seconds just after adding them to the water, and make sure to stir frequently to prevent sticking.

How salty should you make your pasta water? "You want the ocean on your stovetop," is what my Italian grandma liked to say, salting her pasta water to the point that made a lot of her American guests uncomfortable. Don't worry—not all of that salt will absorb into your noodles. If you'd like a guideline as to how much salt to use, try this:

-->The standard salt : water ratio: at least 1 tablespoon of salt for every 2 quarts of water.

Step 3: Test the pasta.
This is another point of confusion for a lot of home cooks: how long should you cook your pasta? The answer is, it depends. If you're making an uncooked sauce or just tossing with olive oil, herbs, and cheeses, you want to cook your noodles all the way to al dente. For those not in the know, "al dente" literally means "to the tooth." The practical meaning, as far as pasta is concerned, is that the noodles are cooked to the degree that they are firm but not hard. You should be able to bite through them without any grit inside the noodle, but they should maintain a firm structure, never squishy, gummy, or soggy.

If you're preparing a cooked sauce for your pasta, you should drain the noodles just before they get to the point of being al dente. Here you’ll want a little more firmness in the bite, with barely a touch of crunch at the very center of the noodle. You'll finish the cooking process after you add the noodles to the sauce (more on this below). In this case, you'll also want to reserve 1 cup of your pasta's cooking water, some of which you will add to your sauce to finish cooking the pasta; this also has the added bonus of creating a more velvety texture, as the starch in the water thickens the sauce a touch while adding a little body.

If you're going to be baking your noodles, such as in a macaroni and cheese casserole, you might consider pulling the noodles from the water a minute earlier, while they're just a hair firmer at the core. This will allow the noodles to absorb the liquid in your casserole without getting soggy.

Step 3.5: DO NOT rinse the pasta.
Don't rinse your pasta after straining unless you're following a recipe that specifically calls for it. You’ll wash away all those gorgeously sticky starches that come in handy for keeping your sauce where it belongs: on the noodles. Rinsing can also make your pasta soggy while diluting the overall flavor of your dish. Rinsing may be necessary in some recipes to get the intended result, but if the recipe doesn't call for it, avoid the temptation.

Many people rinse to keep their noodles from sticking while they complete the rest of the dish. Here's an important rule of thumb: finish your sauce before you finish your noodles. Sauce is much more patient, waiting politely for its next assignment, while noodles give attitude and clump up like their little lives depend on it. If you have to let your pasta sit for a few minutes while you finish up another part of your dish, toss it excitedly every minute or so to keep it from sticking. Or better yet, learn to time your pasta so that it's finished cooking exactly when you’ll need it.

Step 4: Sauce the pasta.
A lot of folks serve their pasta in a heap, with a huge glob of their cooked sauce plopped in the middle of it. While there's nothing wrong with this, per se, there is a better way. Since your pasta should be cooked to just al dente, you might have noticed that it still has a tiny bit more cooking to do. By finishing your pasta off with a few minutes' worth of cooking in the sauce, your noodles will absorb a good deal more flavor than if you'd finished them off in boiling water and stirred the sauce in at the last minute.

This is arguably the most important step in creating your dish, and it's most effectively performed when your sauce has been prepared in a large, wide saucepan with a lot of surface area, which will allow more sauce to come in contact with the noodles. Different sauces will require variations of this method, but for your standard homemade cooked sauce, the following steps should do the trick:

After draining your pasta and reserving a bit of the starchy pasta water, add ¼ cup of this cooking water to your sauce, which should be quite hot. Stir well, add the pasta to the sauce, and set over medium heat. Cook the pasta until the sauce has reduced enough to coat the noodles. If the sauce is reduced and the pasta still needs a bit more cooking, add in a little more starchy water. When the noodles are done, stir in a tablespoon of butter and cook just until it's melted. Serve immediately.

Note: When cooking noodles in a sauce, don't go crazy stirring the whole thing constantly with your spoon, lest you mash your noodles into porridge. Another reason a wide shallow saucepan works well: to keep the noodles from burning, you can simply flip the pan with your wrist, which, if done right, should effectively rotate the noodles and keep them from sticking to the bottom of the pan without creaming them with your spoon. (Thank you, Ming Tsai, for the video tutorial!)

The Challenge.
With a little practice, even the cheapest dry noodles can garner a respectable eating experience and act as a worthwhile base for your awesome sauce; but I'd still argue that artisan-made dry pasta will be far more impressive, especially to those who have trained their palates to recognize quality foods. Here's a challenge: Go out and buy a box of the cheapest pasta you can find, and a box some high-quality artisan-made pasta, such as Baia, Cipriani, or Rustichella d'Abruzzo. Cook them separately to their respective instructions and serve them with the same sauce, side by side. Do you notice a difference in the two pastas? How do they differ in flavor, texture, and body? Which do you prefer? Leave your findings in the comments here.