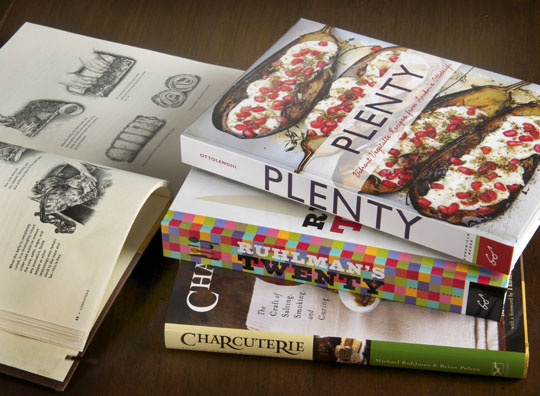 A collection of cookbooks. Photo by Donna Turner Ruhlman

So so so many people tell me they have a cookbook to write, asking for advice, and I almost always do my best to discourage them, with Asian delicacy and Germanic firmness, I hope. Because I believe that there are too many cookbooks out there already and the ones so often published add nothing new.

So when writer and educator Dianne Jacob asked me what does define a successful cookbook, it got me thinking. She’s written an excellent post collating many, many responses from people in the industry. The responses are surprising in their diversity.

The first and obvious answer is, a book is successful if it makes money for the publisher and author.  And there are many ways this can happen, meaning that a book that sells 10,000 copies can be a resounding success while a book that sells 30,000 copies can be called a flop. Thomas Keller’s books, notably Ad Hoc At Home, sell in the hundreds of thousands and are a success simply by that fact: the sheer numbers make them enormously influential regardless of the cash they earn. That means more than money to Keller, the impact they’ve made. These books are very expensive to produce. The current one, The Bouchon Bakery Cookbook, due out next fall, has involved three chefs, one writer, two recipe writer-developer-testers, a photographer (and countless ancillary chefs in addition to the main ones). It involved chefs on either coast and a writer in the middle, requiring lots of travel and accommodations. Photography is very expensive. Printing is very expensive. Shipping and warehousing these large 3 to 4 pound objects are expensive. So they have to sell a lot to make money.

I asked some publishers, what they think defines success:

Bill LeBlond, head of food and drink books at Chronicle Books in San Francisco—he and I hatched Ruhlman’s Twenty—wrote: “The simple answer is that most publishers frontload the expenses of a book into the first printing, so if a book sells out and is reprinted, the book can be counted as a success. Cookbooks are one of the best backlist categories, so the very successful cookbooks are ones that backlist for years.”

Meaning they continue to earn money long after the publisher and author stopped working on them.  Chronicle’s first printing of Ruhlman’s Twenty was 25,000.  It sold out in months, so quickly that Bill wasn't able to hit the reprint button fast enough and so Amazon has been out of stock for months (the second printing arrives this week, yay!).

So by Chronicles standards, it’s successful.  But as far as I’m concerned, what makes it successful is the fact that it encourages people to cook.  That’s my main goal. If I can inspire more people to cook, the book is a success. If it furthers and spreads valuable cooking information it’s successful. If it adds something new to the world and of food and cooking, then it is successful. Those are my definitions of success. They are not regardless of financial success—to me financial success is an indication that people are buying it and spreading the information, and it gives the publisher the confidence to keep investing in me. But a book that makes a lot of money but neither adds something new nor encourages people to cook is not a success.  In my book.

Here’s what Rica Allannic, a veteran cookbook editor at Clarkson Potter, with whom Michael Symon and I worked in publishing his Live To Cook, said: “What is a successful cookbook? One that reaches the audience we hoped to reach when we acquired the project—and maybe even beyond. And—a successful cookbook is one where the author is happy. That's really important!”

I really like that she cares about how the author feels about it in the end. That’s a good editor/publisher.

I asked her two other questions: When a proposal lands on your desk, what are you most hopeful of finding?

“A unique voice that speaks to me,” she wrote, “and/or to an audience I can identify (whether it's working parents, vegetarians, foodies, watchers of food tv, etc.).

In other words, she can envision a market for the book.  It is, of course, business.  She’s not going to keep her job if people don’t buy the book, no matter how happy the author is.

Lastly, and you out there who hope to write a cookbook take heed, I asked her what is the most common reason for turning down a proposal?

“There's nothing special or new about it (i.e. no hook),” she wrote. “It lacks a compelling voice, and/or the author doesn't have a way to make people sit up and take notice (no author platform).”

The photo that leads this post has three successful cookbooks.  I met with LeBlond in December about some new projects I’m working on and somehow the book Plenty: Vibrant Recipes from London's Ottolenghi came up. Bill just shook his head and said they can’t print that book fast enough. Chronicle was not surprised by its success (they saw the same things Jay Rayner notes below), but rather by its success in the changing retail market; a world without Borders found the book selling strongly in indy bookstores, and it's strong visual design and unique voice also made it popular in stores that don't typically sell food-related books. (A personal example of this is that Donna recently spotted Twenty in the Houston Museum of Art store. Thank you Vanessa Dina for your killer design!)

I still had to wonder: a vegetarian cookbook by an Israeli-born chef Yotam Ottolenghi who owns high-end delis in London. An incredible seller here? Why?

I asked London-based food journalist Jay Rayner, who wrote about Yotam for the Guardian:

“Not at all surprised Yotam is taking off over there,” Jay wrote. “I can think of very few cooks who are as distinctive, whose food shouts his name: it's all informed obviously by his Israeli roots, but in a non-doctrinaire fashion. The marketing and styling of the Ottolenghi delis is very clean and smart. And he is absolutely charming. It's notable that his sales have been achieved with almost no TV work. Sure, he's now made appearances, but it's not off the back of a series. He's smart—dumped phd studies to become a cook—urbane, witty, very relaxed about ethnicity. In, short yes, he and the restaurants he fronts—and especially the books—are very popular here.”

The other photographed here is Charcuterie.  This is a success that I am perhaps most proud of.  Brian and I were paid a very small advance for what amounted to two years work ($50,000, split in half, less 15% for the agent, less, oh, at least 15% for taxes.  So that’s netting $18,000 spread over two years; authors only get half up front, a quarter on delivery, a quarter on publication, typically). We wrote it because we loved the subject, no other reason.

It's success is almost bizarre. It is a book reliant on the two main ingredients that throws fear into most American’s hearts: animal fat and salt.  The recipes don't take 30 minutes, but rather days and even months. If you do them wrong, some of them can kill you.

The book has sold more than 100,000 copies, and its bacon recipes has, according to readers and twitter, changed lives.

That, to me, is a success more gratifying than any six-figure advance.

So tell me, what to you makes a cookbook successful? Seriously, I really want to know, because I might want to write more and don’t want to disappoint!

If you liked this post on Writing a Successful Cookbook, check out these other links: