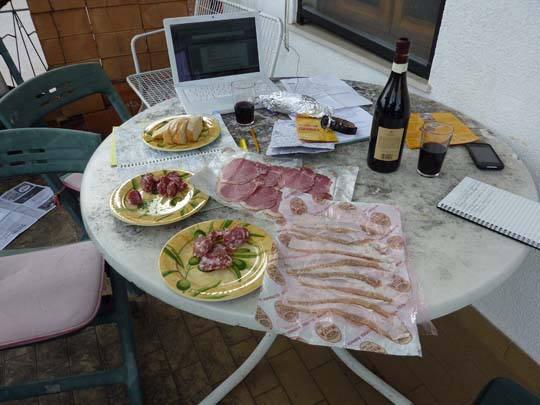 Ten days in Italy with Brian Polcyn and Nic Heckett for a salume tour of northern and central Italy—primarily Piedmont, Tuscany, Umbria and Emilia-Romagna. Damn, Italy is beautiful.  There’s a reason Tuscany in particular is so romanticized.  Its rolling, forested hills and little towns perched on hillsides are breathtaking, particularly, I assure you, if you live in suburban Cleveland, Ohio. 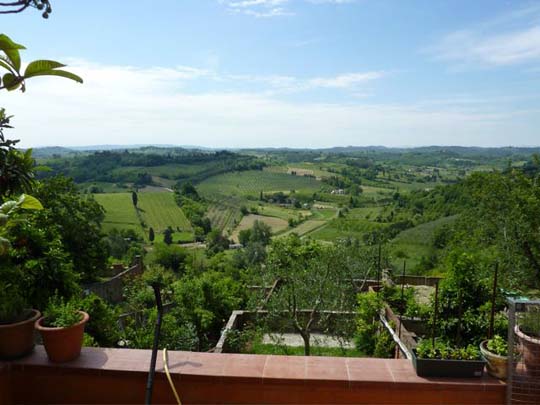 I'm buried in work after being gone, so I will note a few highlights but of course keep the salume revelations for the book—there was one huge transformative one.  The book, a follow-up to Charcuterie and the reason for the trip, is due to the publisher September 1.  Yikes. 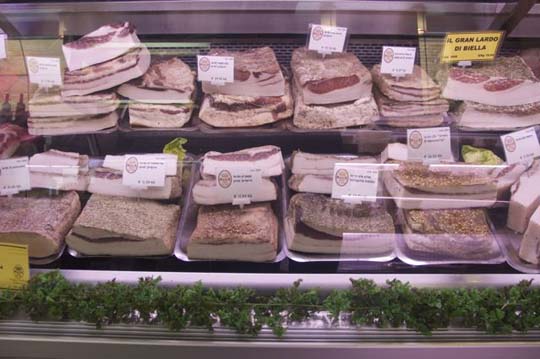 The top photo was what our nightly table tended to look like in the beginning, salume tasting and notes.  What a pleasure it was to travel with Brian, who cooked dinner whenever we were near a kitchen (he'd wake in the morning thinking about the cotechino he was going to cook that night).  We stayed first outside the town of Biella, lovely untouristed city with a stellar salumeria, Mosca.  (A few pics and the whole drop-pin shape of the trip can be seen on my google maps, via my “author” app—click on the compass icon, scroll to Italy, enlarge Italy and start in Biella and go more or less counter clockwise.)

We picked up our colleague, Nic Heckett—who has begun a business, Woodlands Pork, attempting to create authentic American salume using ossabaws forested in the Appalachian hills—in Genova, and carried on to Colonnata, a town high in the Apuane Alps, above Carrara, where much of the world’s finest marble is quarried. Here they make Lardo, pork back fat cured in salt and herbs in marble casks.  Of all the things we ate, this lardo was one of the two great tastings we experienced.  Tastes of a place, tastes impossible to create anywhere else on earth.

Lardo curing in a marble cask below Bigi Luigi's shop in the center of Colonnata.

The second was the Culatello made by Massimo Spigarolli at his ancient villa Antica Corte Pallavicina.  Culatello is the top and bottom round of the back leg of the pig, sewn up in a bladder, tied and dried for 2 ½ to nearly 4 years.  Like the lardo of Colonata, the Culatello, cured in a cellar several yards from the Po River, a cellar whose temperature-humidity control device is a window with a grate over it, is something that can only taste as it does given the pigs of the area and the drying conditions of the cellar. The oldest of the culatello was so soft on the palate it felt close to rot and had notes of stinky cheese along with the sweetness of the ham. Really spectactular. 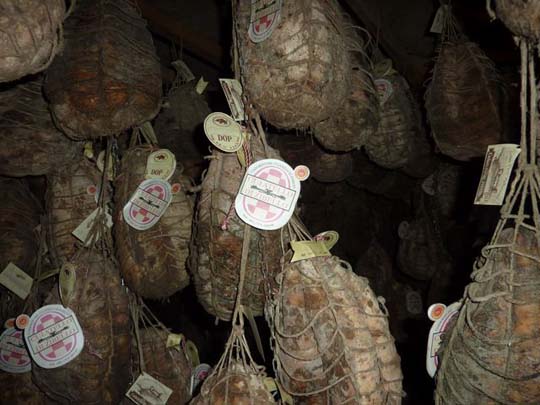 Culatello hanging in the Spigaroli cellar

Below is the Spigaroli temperature and humidity control device.  The cellar was built in the 14th century, about twenty feet from the Po River. 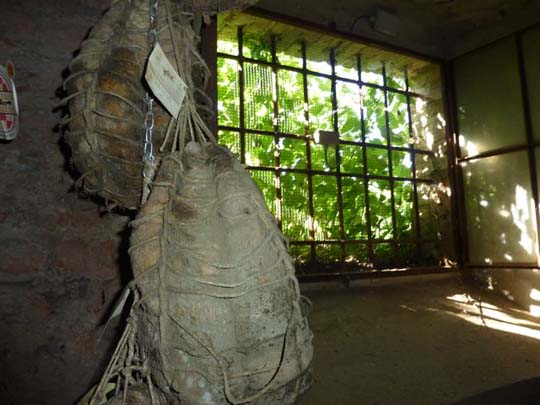 Workers sense the ambient conditions and, especially in the summer, close or open the window to let the outside air in or close it off.

The final highlight was not food, but a working farm and a foundation.  Spannocchia is a foundation who’s mission is to further explore and teach sustainable and organic farming and to maintain and sustain the extraordinary villa and surrounding land.  Toward that end, the foundation brings in 8 interns for three month periods to work the farm and to see Italy.  They were an inspiring group and the place itself an agrarian idyll. 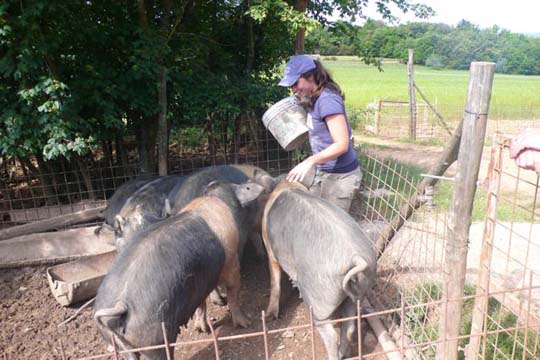 One of the interns, Elisa from new Jersey, feeding the pigs (an heirloom breed called Cinta Senese, brought back from near extinction in the 1990s) 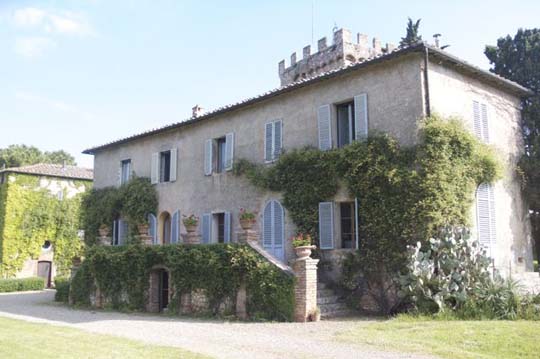 The final night found us at a Novotel near the airport outside Milan. Brian stole a serated knife and plate from behind the untended bar to cut some salami he'd picked up in Norcia (coglioni di mulo, named for their shape, "mule balls," pear-sized salami with a bar of lardo running through the center).  The bartender, Vincenzo, hustled over to take it all away saying the hotel could get in trouble, but adding that if we wanted to know about salame, he could give us the real scoop, the way the best salume is made.  From his town, in Calabria.  The salume trail will continue.