Mom took the whole family on a trip to canyon country all of last week and I'm just getting back up and running (family vacations really take it out of you). Flew into Vegas for one night, Donna and the kids had never been—and I still think the place is a vision of the end of the world, and 24 hours in Vegas is 21 hours too long (kids loved Cirque de Soleil Mystere, and I love the civilized oasis of Bouchon in the Venetian).

At our last stop, Sedona, AZ, they had a continual supply of crisp, cool beverages made from the prickly pear, and on our last day we took a Pink Jeep, bone-rattling, off-road tour and saw many of these. I'd never been to this part of the country and had virtually no experience with prickly pears. Happily Garrett McCord has an excellent post at Elise Bauer's simplyrecipes.com on preparing and using this odd desert fruit, with several links to recipes.

But it was the travel we were after here, not the food. Sights like this: 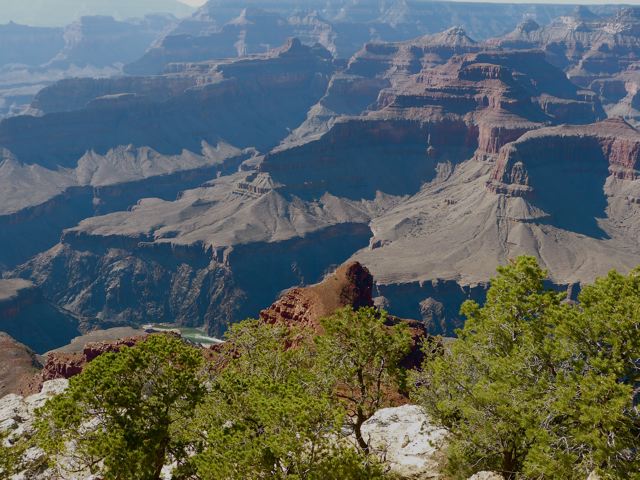 The north rim of the Grand Canyon

The linchpin of the trip was the Grand Canyon. Long ago Mom had asked her grandkids if she could take them to Italy or some part of the world they wanted to see. My daughter said, "How about part of our own country? Why should we go to another country when we haven't even seen our own. How about the Grand Canyon?"

Lucky it was her idea, because on our mile-and-a-half trek down Bright Angel trail, in midday heat, every time we passed a sweaty huffing person heading up, she'd shoot me knife-like glances, furious that this vacation required actual effort. Donna and I found it exhilarating. Unexpectedly, though, the Grand Canyon was the least impressive of the places we visited. It's simply too big to take in. Yes, it takes your breath away, the sheer size of it, but it's more powerful to think about and see on a map than to stand at a railing and look out.

The most stunning hike was at Zion National Park:

We spent the morning hiking within the canyon, looking up at walls like this. 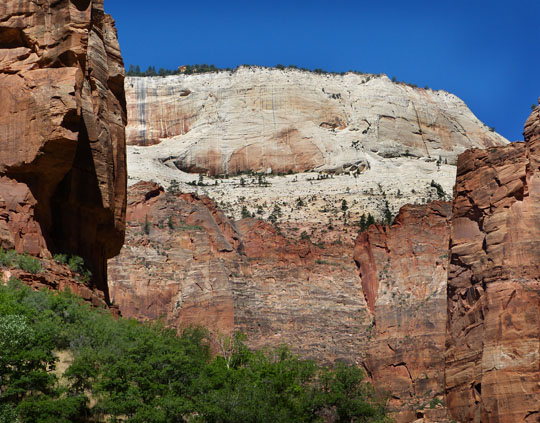 Mom splurged on a way-cool resort, Amangiri. It's the kind of place where everything is so chi-chi it forces me to admit that I'm a complete impostor. But damn were those beds comfy.

The biggest impression for me was the deep quiet of the place, especially nighttime in Canyon Point. It was so deeply peaceful that you could almost sense the hum of the earth, how old it truly is, how small and brief our lives are, the interconnectedness of all things. It made me understand better the deep respect for and connection with the earth Native Americans had—it's so obvious there. Not when you're sitting by the pool with a sage mojito in your hand, of course, but when you're alone and look beyond the rock to the stars.

It was an irony of the trip that we drove from a very expensive resort to the north rim of the Grand Canyon, USA tourism central, via 89S, which is sided by the grimmest rural living conditions I've ever seen: "Indian" reservation land, a glimpse of the result of the irreparable tragedy caused by European Americans, and the many trails of tears my ancestors created.

Our final stop was Sedona, where the main strip of chintz is overshadowed by glorious mountains of red rock. Again the deep age of the earth. The concluding event of the trip was a tour of the sky and stars by a man named Dennis Young, whose decades-long passion for looking at stars verges on lunacy (the good kind). The sky was so clear the band of the Milky Way was visible; with his amazing homemade telescope (it required standing on a ladder), he showed us a galaxy 25,000 light years away and the clearest view of Saturn I've ever seen. Time in the rocks around us, and the deep time of space. It's powerful and, if you're the sort who thinks a lot about our mortality, definitively obviates a fear of death (it's also the best antidote to the horror of Vegas I've encountered).

For we were Vegas-bound the next day (to the airport only, thank goodness), and had left enough time to stop by Seligman, AZ, for a glimpse of the old Route 66.

Thanks, Mom, you just get more awesome every year! 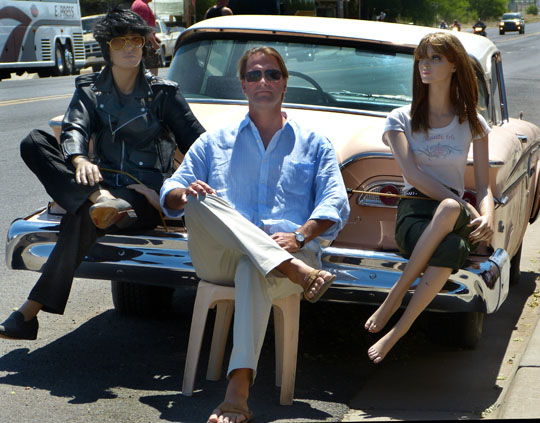 Sharing a moment with fans on the old Route 66, Seligman, Arizona.

If you liked this post on our trip to Arizona and New Mexico, check out these other links: