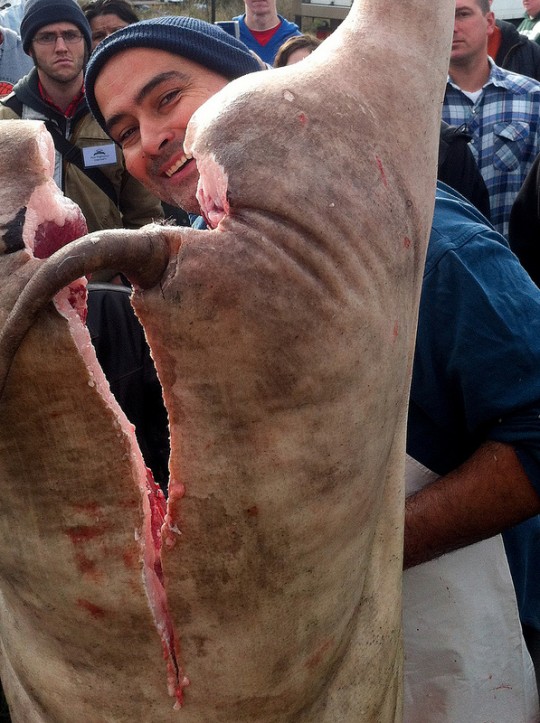 Christoph peering through the pig. Photo by Jürgen Schmücking.

I had one of the most inspiring days of my life Monday, watching Austrian farmer/butcher Christoph Wiesner kill and dress a hog. See video below of evisceration shot by Austrian journalist Jürgen Schmücking, covering Pigstock TC and Michigan wines and beers.

We met on Marc Santucci's farm, on a warm fall day, surrounded by leaves, apple trees, and tall grass. The pigs were rooting in an open-air pen, where the slaughter took place. 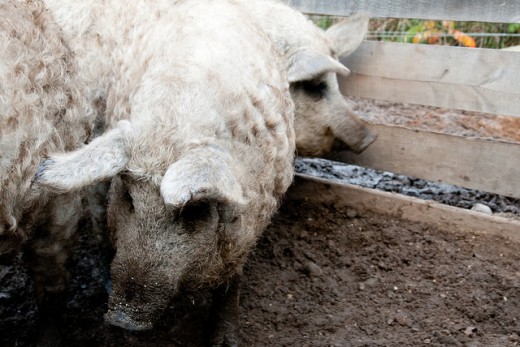 Christoph stunned the pig with a bolt. He explained that it was important to do this with the pig in its natural position—less stress on both animal and muscle, which can be harmed by the acidity produced by stress. He was nervous and I could see it, his own heart pounding, taking deep breaths. He petted the pig and made loving noises to it. "It's not my pig, so I don't know how it will respond," he said. "Sometimes they jump over the fence. Anything can happen." 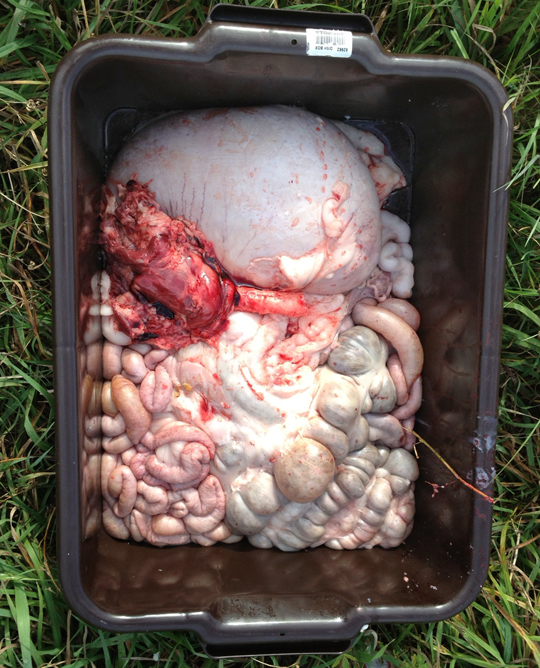 Once stunned, we dragged the pig onto the grass. Christoph stuck it expertly, and his wife, Isabell, held a big bowl under the pig's neck to capture the blood, about two gallons. She swished it rapidly with her hand, in the blood up to her wrist, to prevent it from coagulating. She put the bowl in a cold-water bath to chill it, swishing and spinning it continuously. Blood sausage will taste best this way, she explained.

Christoph pumped the foreleg to get all the blood out. Then he tied each hind leg to hang it. He doesn't believe in sticking hooks in legs because it damages the hind shanks.

The pig was lifted mechanically with a tractor lifter and brought to a bathtub filled with 180°F water, in which the hog was scalded, then removed to a table to have its fur scraped off. It was then relifted so that Christoph could demo the dressing, doing it slowly, showing us all the organs and viscera as they emerged, all of it to be used. When the pig had been sawn and cleaved in two, Christoph cut a strip of backfat from the pig, then cut small pieces of it for us to taste. Warm, chewy but tender, neutral in flavor, succulent. It was kind of like taking communion of the pig. 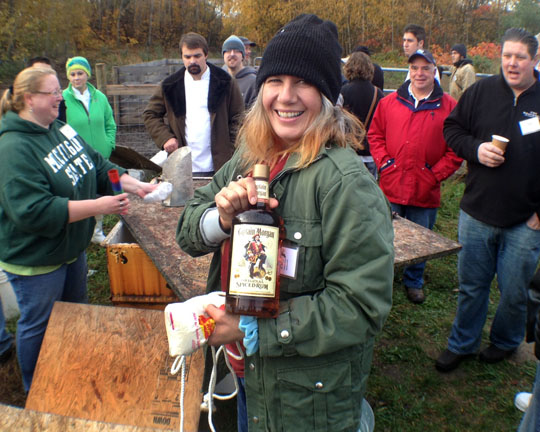 Isabell and some Captain to drink to the soul of the pig. Photo by Jürgen Schmücking.

"I have vegetarian customers," Christoph told me. "They are vegetarian because they have seen [industrial] slaughter. But when they see how I do it, they buy meat from me."

I would, too. He and Isabell truly care about the animals. Before the slaughter, Isabell poured shots of rum for all present. "It is tradition," she called to the 30 observers. "We drink to the soul of the pig!" And she, and we, raised our glasses.

Thank you, Christoph and Isabell, for what you do. Thank you to J.T. Hoagland (head of Cherry Capital Foods and organizer of Pigstock) and all who make Pigstock happen in lovely Traverse City, Michigan, for educating more cooks and chefs.