I am lucky enough to live in a town where the local hardware store carries replacement electrical cords for old fashioned percolators.  The fact that mine crackles when I plug it in means it's time to get to that store. And it reminded me of this post from nearly two years ago.  My love of perked coffee has not faltered, nor has my fierce desire to rid the world of the ridiculous automatic drip coffee maker, a sham perpetrated on an unthinking, convenience minded public. 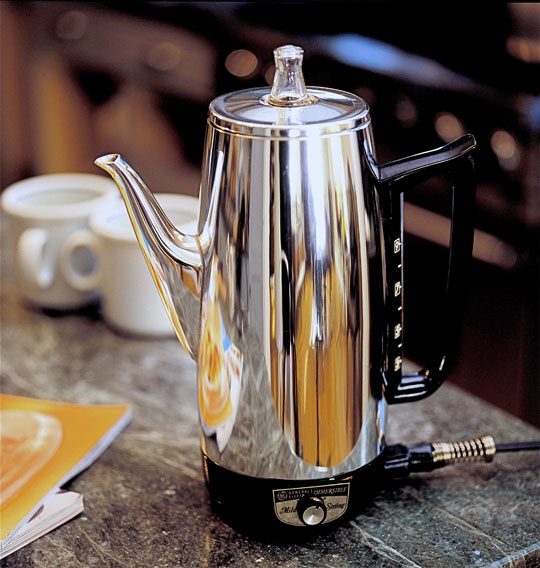 When my beloved General Electric 9-Cup Percolator, filched from my father’s house, gave out after 40 years of vigorous life, I got what I’m sure was a gift from heaven: another one (above).  Discovered on E-Bay, this one, manufactured in 1950, was all but unused.  When this one went kerplooey, I got an even better gift on ebay: three of them, for $13.

I cherish the General Electric percolator (apparently no longer in production), but when I tell people that it makes the best coffee, by far superior to the ubiquitous automatic drip machines, they look at me like I've just confessed my belief in creationism.

It astonishes me that I have to defend this sleek, 9-cup wonder.  I serve generic decaf to guests and they’re begging to know what kind of coffee I buy.  Swear to God.  I haul out the big green can to prove it.  Coffee snobs will say percolated coffee is "over-extracted."   I call it very strong, rich coffee that’s piping hot and stays hot without burning.  That its biggest advantage—percolators keep the coffee HOT, auto-drips burn it.  And yet the GE model with its glass top and elegant drip-free spout has long been retired.  Today’s percolators, what few remain, are awkward vessels with stubby spouts, and the coffee, well, it just isn't the same.

How did this happen?  Where did the percolator go?  Automatic drip coffee makers for the home, introduced in 1974 by Mr. Coffee (a Cleveland invention, no less! by people I know and like!), are the dominant household coffee machines, selling 20 million a year.  And yet the coffee they make is at best OK.  The flavor can be good IF it’s good quality to begin with and it’s served immediately upon being brewed.  (But better to use a French press in this case.)   Auto-drip coffee though almost never hot, especially if you put anything in it.  If it sits for a half hour, it’s tepid, and soon burnt.  It’s usually not much faster, nor appreciably easier to make.  The machine is not better to look at, while the GE percolator is one of the great home-appliance industrial designs.  And instead of the aromatic, enticing rush of gurgly percolation—one of the daily pleasures of this device—you get instead the sound of someone tinkling.

America lost something when it stowed the percolator in the back of the cupboard.  It gave up a superior machine to a marketing strategy, fashionable gimmick and the promise of “convenience.”  I want the percolator back.  I want people to wake up.