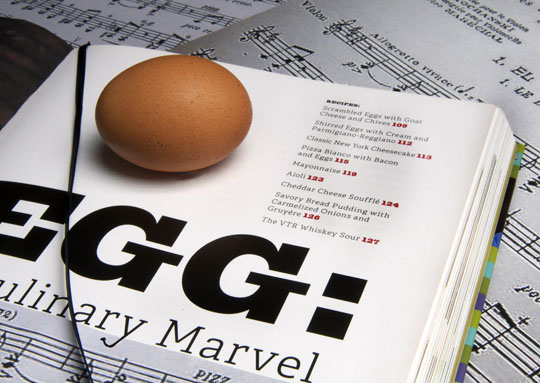 An egg in a recipe is like a note in a symphony. Photo by Donna Turner Ruhlman

Last night, on the Broad Stage with the Los Angeles Chamber Orchestra, I spoke about connections of music and food, in between selections from Puccini, Rossini, de Falla and Schoenfield.

When Rachel Fine, executive director of the Los Angeles Chamber Orchestra, first wrote to request that I speak, I honestly almost flat turned her down. I’m no music expert, and wasn't sure what point it would serve. But she pressed, I became intrigued enough to give it some thought and was surprised to discover how many natural similarities there were and are, and perhaps most surprisingly of all to realize a couple of important musical metaphors had worked their way into my own writing without my being conscious of it. The first was my final meal at the French Laundry, having spent several weeks in January and February 1998, which I wrote about it in Soul of a Chef.

I dined alone, and knew by then how the kitchen worked. They never served a table if someone was up from the table. This meant that four different preparations of say, butter poached lobsters could be whisked from the pass, then immediately returned if someone from table seven had left the table.

So midway through the four and a half hour meal, when a server removed course number 14 from my table, I said, I’m going to use the loo, is now a good time? I was assured it was and that they’d make sure that my main server knew. With all that wine and food, one trip away from the table to release what must have been two bottles of wine by then over three hours was admirable I figured.

Later in the meal in conversation with Laura Cunningham, who was managing the dining room that night, Laura confided that Thomas had been mad that I’d gotten up.

I said, Laura, you’ve got to be kidding, what did he expect, all this time and these many glasses of wine; plus I’d made efforts to ensure the kitchen new I’d be out of my seat for a few minutes. Mad, how could he be mad?

Later it occurred to me why. He’d been performing. This was a performing art, with a building of tastes and flavors. He was the conductor, and I’d left the auditorium in the middle of the performance.

Indeed, a meal at that level is a performance. His was a performing art and it shared many qualities of an orchestral performance. There were themes and movements, a narrative arc, the pleasures experienced were sensory, non-verbal. And when it was done, it was gone. I had only the memory of it. I couldn’t relive it, as I could a book or a film or a painting or a sculpture. The art had vanished and I was left with an experience and a memory, and the pleasure of having experienced a virtuoso performance.

And it shares other similarities to musical performance: it's often a shared experience, it's enriched when we share it with others, when others bring their impressions to the work and you yours. It evokes emotion.  In Keller's hands it could achieve ironic effects. It's a largely non-verbal experience, the pleasures surely are non-verbal. And it ends and when it ends it's gone. It exists only in memory.

Nearly a decade later, having written numerous books on both food and cooking and chefs, as well as books about plank on frame wooden boats and the people who build them, about a surgical team that repairs the deformed hearts of babies and children, I wrote an opinionated glossary of cooking terms, Elements of Cooking, all the terms any cook would need to know in the kitchen, from bisque (shellfish only, no such thing as a pumpkin bisque), mise en place, salted water, and other vague or not-well-defined terms that I hoped to clarify.

On rereading the introductory seven essays on my convictions about tools, about stock, about important books, and the glossary itself, my editor, Beth Wareham said I'd left out an important term: recipes.

Even before I attended the Culinary Institute of America I’d begun to feel an animosity toward recipes. Then, recipes were a dime a dozen. Now there’s an ocean of them for free. What then did the term “recipes” mean.

Recipes: Recipes are not assembly manuals, I would write in that book.  You can’t use them the way you use instructions to put together your grill or the rec room ping pong table.  Recipes are guides and suggestions for a process that is infinitely nuanced.  Recipes are sheet music.  A Bach cello suite can be performed at a beginner’s level or given extraordinary interpretation by  Yo Yo  Ma—same notes/ingredients, vastly different outcomes.

How to use a good recipe.  First read it and think about it.  Cook it in your mind.  Envision what it will look like when you serve it.  Try to know the outcome before you begin.  Read a recipe all the way through not only to understand it generally, but to make your work more efficient and to avoid making errors or taking unnecessary steps.  Perhaps a dough needs to chill for an hour in the middle of a preparation, perhaps meat needs to be salted for 24 hours, or a liquid must be simmered then cooled.  The recipe suggests adding the flour, baking powder and salt one at a time, but perhaps you can combine all the dry ingredients ahead of time while you’re waiting for the butter to get to room temperature, so you can cream it with the eggs.  Taking a few minutes to read a recipe, acting out each step in your mind as you do, will save you time and prevent errors.

Measure out or prep all your ingredients before you begin.  Don’t mince your onion just before you need to put it in the pan, have it minced and in a container ready to go, have that cup of milk and half cup of sugar set out before you.  Good mise en place makes the process easier and more pleasurable and the result tastier than preparing a recipe with no mise en place.  If you’re unsure about an instruction, use your common sense.  You’ve already imagined in your head what the goal is.  Work toward that goal using all your senses.

This entry (which Heidi also posted on 101cookbooks.com) was a last minute inclusion Elements, thanks to Beth's request.  The fact is, I like to say that I don’t like recipes and I don’t like cookbooks.  But that’s not strictly true.  I don't like a cooks' reliance on recipes.  We can learn many things from a good recipe and the best recipes help us to see and understand cooking in a new way.  But when we use them as construction manuals, I think they may do more harm than good.

One of the choices last night was Schenfield's Cafe Music, featuring among other instruments a cello. I played cello in sixth grade and I’m sure I could have learned parts of this piece, though it's a frenetic often discordant and brillaint piece of music. But my version would have been far less enjoyable to listen to than the rendition performed last night.

(There's also tool fetish, famous among chefs and their knives; Margaret Batjer, concertmaster, played violin on Cafe Music using a 1726 Stradivarius—a more gorgeous instrument I've never seen; she showed it off at Figs where we ate after the show. Wow.)

This performance was defined by nuances, how long the cellist, the violinist held each note, or how quickly, how hard his and her bow pressed on the strings how definitively he plucked them. Most important of all is practice: they had practiced this over and over. A cook should do the same thing, not make one recipe then another then another, but rather the same recipe over and over and over, not one dish identical, the cook developing in mind and body an increasing mastery of the composition.

This is the way to cook well, really well, truly to cook like a chef. And it may be one of handful of qualities of Thomas Keller that makes him the virtuoso that he is: the capacity to do the same thing, often acts that most would consider numbingly boring, turning artichokes, peeling asparagus, over and over and over, appreciating each time the nuances of the differences of each experience, being acutely aware the entire time.

In his superb book Complicatons: A Surgeon's Notes On an Imperfect Science, Atul Gawande makes the observation that physical genius, whether that of a heart surgeon or Larry Bird or Yo Yo Ma may be that way not because of an innate gift, but rather because they have practiced more, that what unites those who achieve excellence may be not genius, but rather the capacity for practice itself, for doing the same thing over and over.

If you liked this post on A Recipe as Sheet Music, check out these other links: