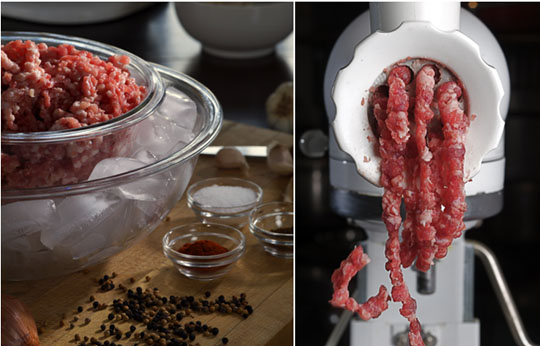 Welcome to the official #charcutepalooza Safety and Health Concerns post and page, and a place where you can ask questions comprising more than 140 characters that I or others can answer.  Have a look at our book Charcuterie for all general safety issues.

Many of you are embarking on unfamiliar waters regarding the curing of meat.  If you’re fearful or nervous, remember that humans have been curing meat for millennia, that civilization depended on the ability to preserve food by curing it for most of human history and that if it were complicated and dangerous we probably wouldn’t be here.

As with all cooking, curing meats and making sausages requires the use of all your senses, perhaps most importantly, your common sense.  Think.  Try to reason your question out.  Does this mold look gross?  Don’t eat it!  Does this thinly sliced duck breast look enticing, glistening?  Taste it!  Smell it—does it smell bad or good? Del Grosso put it fairly succinctly: If it doesn’t stink and isn’t slimy, it’s probably fine.

—If you'll be thoroughly cooking the food before eating it, as with bacon or pancetta, there are no bacteria or botulism issues since cooking food to those high temperatures takes care of any bad microbes and the botulism toxin, should there be any.

—All mold except for chalky white mold should be immediately removed from the meat with a brine or with vinegar. It does not mean that you should throw it away. But be if mold has been allowed to grow for a long time, it can penetrate the meat. Use your common sense.

—If your food smells rotten or looks unappetizing, don’t eat it.  If you have reason to be concerned about bacterial contamination and don't want to throw it away, cook it before eating it.

—When dry-curing sausage, always use a curing salt to protect against botulism bacteria. 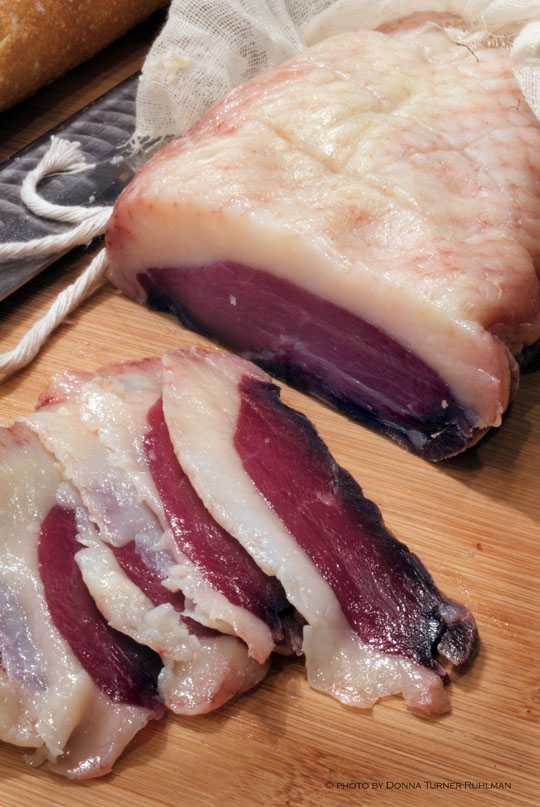 This is the easiest and most straightforward type of curing to do at home.  The thickness of the meat determines how long a piece of meat needs to be on the cure or in the brine.  Bacteria for the most part is only be on the surface meat of meat we cure.  Rinsing it off is usually a good idea (I buy whole beef cuts to grind into tartare, but I always wash it and give it a good coating of salt first).

If you’re cooking the meat (such as bacon or pancetta), there are no health concerns.  If you are drying the meat, the rule of thumb is that it is done when it's lost about 30% of its raw (or green) weight.  It should be firm but not hard, and sometimes it’s not completely firm.  Salmon needs neither to be dried nor cooked and should be a little squishy in the center.  Depends on the cut.  Again slice and taste.  If it’s pleasant to eat, eat it; if it’s not, it’s not done.

Whole muscles are very forgiving when you dry cure them.  Temperature and humidity can vary widely and the muscle will dry fine.  I usually just hang pancetta and duck breasts in my kitchen and they do fine. You don't need a temperature- and humidity-controlled drying chamber.

In very dry conditions, the exterior can dry to the point that moisture from within can’t escape, resulting in a tough hard exterior and a raw interior.  It won’t hurt you but it might not be delightful to eat. 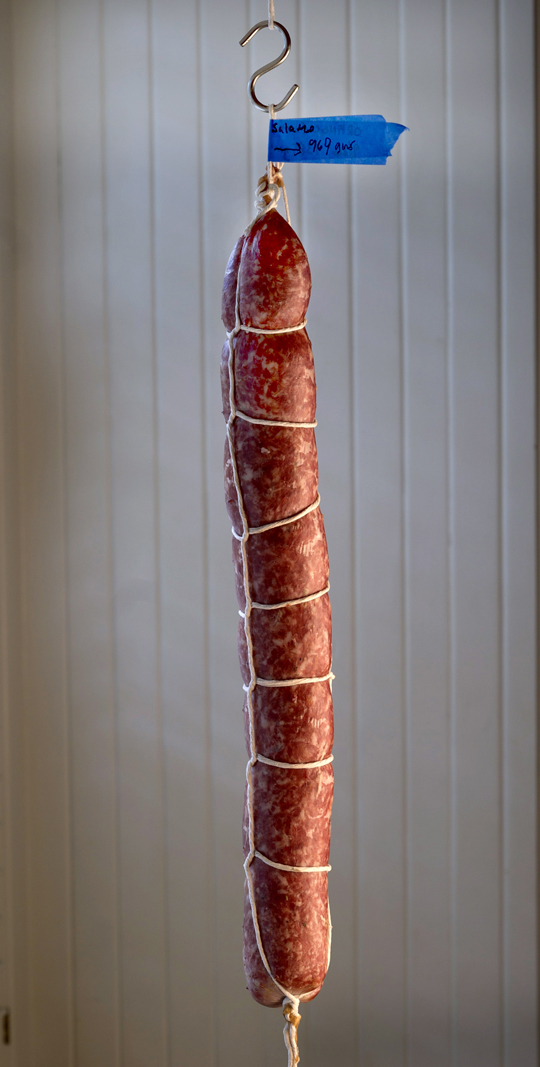 Dry curing sausage is the most tricky and temperamental of the dry-cure preparations.  It’s advisable to use a bacterial starter culture to ensure you have sufficient acidity and to use sodium nitrate (DQ Cure #2) to prevent the bacteria the toxin that causes botulism.  Optimal conditions are around 60 to 65 degrees F. and 70% humidity.  I’ve also started using a mold culture to mist the sausage with to make sure good mold develops and not bad mold.  The cultures and curing salts are all available at butcher-packer.com.

I’ll address specifics when #charcutepalooza needs them to be addressed.

If you’re healthy, no bacteria you encounter in the craft of charcuterie will likely kill you, especially if you have a quality source for your meat. The bacteria you encounter will be on the surface of the meat—I routinely rinse and pat the meat dry, then salt it.  The way bacteria gets into the center of meat is when you grind and mix it for sausage.  This is why you can’t get e coli poisoning from a rare strip steak but can from a rare hamburger.

Keep meat that will be ground or has been ground cold until you cook it—if by chance there is harmful bacteria in the meat, temperatures between 40 and 120 degrees F. allow them to reproduce at astonishing rates, especially in the 90 to 110 degree range (that would be 4 to 48 degrees C., and 32 to 42 degrees C., respectively).

The bacterium that creates the toxin that causes botulism must be addressed in dry-cured sausages and items that are smoked and then eaten without being cooked further.  Botulism bacteria are prevented with sodium nitrite (see below).

—Its fundamental property from a health standpoint is that it kills bacteria that cause botulism in smoked and ground meat.

—The great advantage of using sodium nitrite is flavor: it’s what makes bacon taste like bacon and not spare ribs, what makes ham taste like ham and not a pork roast, and corned beef like corned beef and not pot roast.

—You do need to handle it with care because it's toxic if you ingest it directly.  It's colored pink to prevent accidental ingestion.  Keep it out of kids' reach.  According to this link on Oxford University's site, the exact toxicity is 71 milligrams per kilogram.  I weigh nearly 100 kilograms.  That means if I ate 7.1 grams, it could kill me (by binding the oxygen carried by my blood to the hemoglobin, making that oxygen unavailable to my cells).  That's about a teaspoon.  If you're a petite 110 pounds, ½ teaspoon would be toxic.  This article on its toxicity suggest an even lower amount is harmful.  Bottom line: Don't be afraid of it, but keep it well identified, and use it only as a recipe calls for.

—In the amounts called for in curing meat, and in the amount we commonly eat, it is not harmful in any meaningful way.  Indeed, used properly, it's beneficial.  It’s an anti-microbial agent (i.e. kills bad bacteria), and it creates great flavors and appealing color.

Many think of sodium nitrite and sodium nitrate to be harmful chemical additives and have heard that they can be carcinogenic in certain situations.  Here is my position on these issues:

Nitrates and Nitrites are naturally occurring chemicals that our bodies rely on for a number of reasons.  Green vegetables such as spinach and celery are loaded with them.  Of all the nitrite in our bodies, as much as 93% of it comes from the nitrate in vegetables.  Our bodies naturally convert nitrate into nitrite, which works as a powerful antibacterial agent, particularly in an acidic environment (such as in our stomachs).

In the 1970s, concerns arose that nitrites could be carcinogenic.  Current studies conclude that large quantities (as in contaminated water) can do serious damage, but that the quantities added to food do not.  Indeed, as one study put it, “Since 93% of ingested nitrite comes from normal metabolic sources, if nitrite caused cancers or was a reproductive toxicant, it would imply that humans have a major design flaw.”[1]

And The American Medical Association reports that as of 2004, “given the current FDA and USDA regulations on the use of nitrites, the risk of developing cancer as a result of consumption of nitrites-containing food is negligible.”

It’s my belief that companies advertising their products as “nitrite-free,” are either uninformed themselves or are pandering to America’s ignorance about what is healthy and what is harmful in our foods.  In other words, the term "no nitrites added" is a marketing device, not an actual health benefit.

Use pink salt in the quantities recommended in the recipes and eat a balanced diet.

Questions, concerns?  Leave them in comments.