Dan Moulthrop, a former journalism student of Michael Pollan, interviewed the writer before a sold-out crowd at the Ohio Theater last week. I asked Dan, Curator of Conversation at The Civic Commons, a Knight Foundation project to use new media and emerging technologies to strengthen civic engagement, for his thoughts on Pollan's visit. —M.R.

I woke up this morning from a dream in which I'd taken Michael Pollan to the West Side Market. It's just an echo of his Monday visit, and a remnant of a strong desire the Cleveland ambassador in me had to show him both that place and the Ohio City Farm.

Here's my big takeaway from Monday night: The food system I grew up with is not the food system we'll necessarily be stuck with. At one point Michael said that it's possible the last forty years will look more like a short detour for food production and eating. Having grown up in the 70s, which was probably a low point for our current system. Everything was mass produced and distributed, but little of it was good. That was when we all got to know that cardboard tomato at the Acme supermarket, and long before the vine-ripened hothouse tomatoes that do a slightly better job at approximating what nature intends. I had never seen an avocado until I was 15, visiting family in California. So that gave me great hope that the Earl Butz-birthed food system, with its over-reliance on corn, might be a temporary aberration.

Add to that the fact that the college student internship growing most in popularity right now is farming. No kidding. He said that either on stage or backstage and it really surprised me. Farming is becoming hip. People want to be farmers. When you and I were growing up, the narrative was only about people leaving the farm. That story is turning around and allowing people to find a new way to grow food and distribute it to the rest of us. That means that every day, more and more young people are thinking about careers like Tom and Wendy Wiandt (the mushroom growers at the Farmers Market) and Will Allen in Milwaukee—a polyculture worm farmer raising tilapia, golden perch, and a greenhouse full of the kind of vegetables you'd love to be able to serve to your family. He talked about Allen from the stage and that was a real jaw-dropping moment for a lot of folks. We were all contemplating how the Joel Salatin kind of polyculture could be done in an urban greenhouse--and actually employ a few dozen people.

Lastly, there was something left unsaid—it's our responsibility to buy this stuff and to choose food whenever and wherever we can. When I'm at Heinen's with the kids on a Sunday, it's easy to forget this. These young local operations won't survive unless we support them and buy their meat, tomatoes, and potatoes. If we can't ever change the whole food system (and given how much Big Ag has invested in corn and soy, Pollan says, it's unlikely we'll see the heartland return to sustainable practices) we can change how we use the food systems, and which parts of it we rely on. With apologies to Gandhi, we can eat the change we want to see in the world.

And by the way, Pollan was a great journalism teacher. He was generous with his time, enthusiastic about student ideas, and always willing to explain exactly how he did the work—from making contacts and planning reporting trips to keeping his notes organized. I benefited greatly from his instruction. 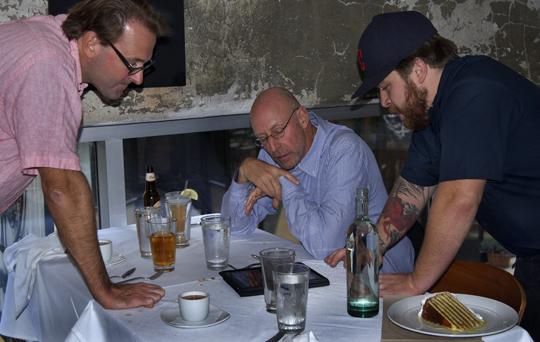 Chef Sawyer shows Pollan photos of vats of vinegar fermenting in his cellar.

It was an uncommon week here in Cleveland as Ruth Reichl also arrived to speak. Donna and I had dinner with her at Lola and she too brought up the changing food zeitgeist, noting that her son and many of his friends, all in their early twenties, are vegan for ethical reasons. They're not opposed to eating meat, she said, but they're opposed to eating meat from animals raised inhumanely. As they can't afford the high cost of meat from humanely raised animals, they choose veganism. It paralleled what Pollan said at lunch, that we need to address the more difficult problems in changing our food system, such as the high cost of the products of humanely and sustainably farmed food.

During lunch though, we stayed away from food politics. Pollan talked about the book he's writing on cooking, about the sauerkraut he's fermenting, about the Richard Wrangham theory that we became human only after we began eating cooked food (a good theory that hinges on proving when our ancestors mastered fire). And back to fermenting again. He noted he makes his own vinegar, and Jonathon Sawyer sent up a vinegar tasting, vinegars from a variety of beers and wines, which we tasted with French Fries.

A good week! And a good week ahead as I'm off to Durham, Norfolk, and New York City flogging the new book. 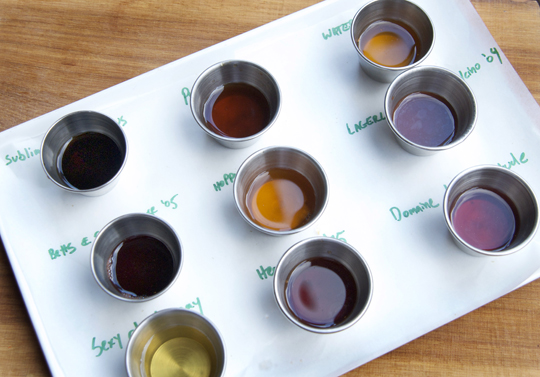 If you liked this post on Michael Pollan & Vinegar, check out these other links: