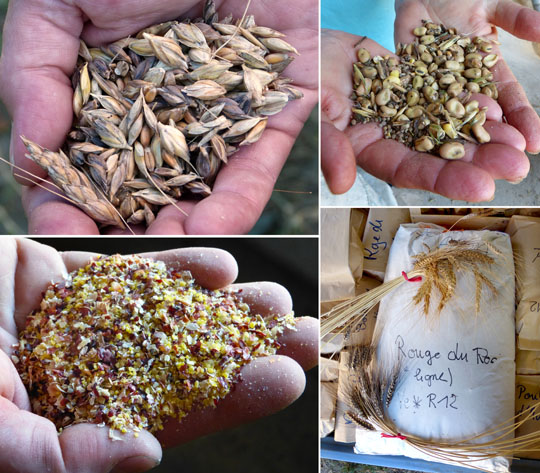 A handful of grain. Photos by Donna Turner Ruhlman.

I got so carried away with my enthusiasm for Omar’s I didn’t get to the rest of my NYC post, which needs to emphasize an important event, orchestrated by Ferran Adrià, that took place in Manhattan and at Blue Hill at Stone Barns.

(A number of people asked what show my Mom took me to before that lovely dinner. It was The Trip to Bountiful, for which Cicely Tyson won a Tony. I mention it not because it’s a lovely, subtle play [and movie with Geraldine Page] by Horton Foote, but because it was such an unexpected thrill to see genuine star power on stage. And I’m not talking about the power of celebrity, which is its own weird, slightly creepy entity, but rather power that comes from within, the diamond-hard center of an artist. Tyson lights up the stage with her enormous talent. Moving beyond words. Had this been the 1950s, I’d have sent a bouquet to her backstage and begged to introduce myself.)

But before the show, I was lucky enough to spend an hour with Ruth Reichl in the lovely library section of the bar at the NoMad Hotel. Ruth had just been to the aforementioned event at Stone Barns and had been deeply impressed. It merited the attention of the NYTimes the following day, and here’s why it was so important to Ruth, what made it a powerful event:

Dan was focused on having the chefs work with the breeders, she wrote in a follow-up email, so they can, as he says, "write the recipe from the very beginning."  And that's certainly a compelling idea. The next day Michael White said to me, "I'd never thought about the fact that we were working with compromised ingredients." But the three facts that really stuck with me had nothing to do with that.

1. We're telling people to eat more vegetables, and many of the vegetables that they're eating don't have much nutrition.

2. Seminis, the largest seed company in the world (owned by Monsanto), controls 40% of tomato genetics.

3. If you could go back a hundred years and ask a seed breeder about some "heirloom" variety, he'd look at you as if you were insane and ask why you were focused on a hundred-year-old variety. For breeders it's a constant process of evolution. I think about that now, every time I see an "heirloom" tomato.

Dan Barber wrote in an email what he thought most important: "That heirloom and heritage breeds, while great, are the past—they represent a moment in time that we stopped and captured. Modern breeders can do a lot better—better nutrition, better yield, and better flavor. They simply need to be asked. Right now, no one is asking them."

And everyone seemed to agree that as multinational corporations control more seed genetics and promote monocultures (bad to rely on as they can be decimated by bacterium, like this corn), it is critical for chefs and consumers to encourage breeders to create seeds that give us exactly what Barber and Reichl asked for—most of all, better nutrition.

It's an idea I encountered when I wrote about one of the great food areas on the planet, Gascony, the southwest corner of France, where I met a "peasant baker" who is growing small patches of 250 different kinds of grain (shown above) to sell to growers, and where the wonderful Kate Hill of Kitchen at Camont, while driving Donna and me to the Chapolard farm, which grows the feed for its own hogs, said to us, "When you barbecue ribs, does it start with the pig? No, it starts with the seeds." In the upper right photo Kate holds the feed grown by the Chapolard family.

It should be obvious but it's not: we need to focus on where our food (all life, for that matter) begins: the seed.