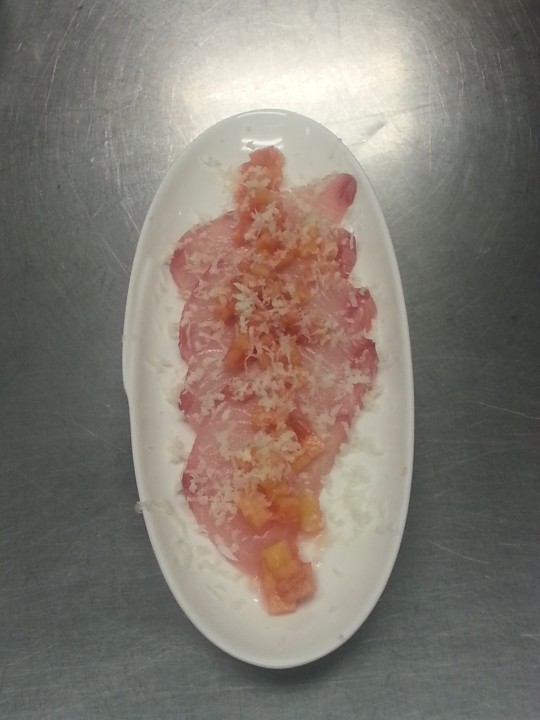 Hamachi and horseradish by Julian Proujansky at Omar in NYC

Here’s how it happened. When my mom asked me what she could give me for my 50th birthday, I said "A Broadway show and a nice meal, just the two of us." The restaurant she chose was one of her faves, Marea, but then she changed her mind—her pal Cynthia, with whom she was staying on the UN-traffic-clogged East Side, said we had, had, had to go to Omar’s—only open ten weeks. I hadn’t heard of it. Checked it out on Urban Daddy—interesting but I hate clubs. I looked into the namesake and thought, South American party boy—I don’t know, Ma. But she’d reserved it, even ordered a car for after the theater for the special occasion, so I didn't argue.

It’s in one of my favorite neighborhoods, West Ninth between Fifth and Sixth, and we descended from the sidewalk to a lovely long bar and main room, casual, and leading off to the left, the more clubby, sleek black club part of the restaurant. Service was attentive and Omar himself brought us back. All were friendly (they knew my work). I had a bit of stomach bug and didn’t really care about eating, really just wanted to be with Mom. I ordered gougères to soothe my irascible tummy, and the hamachi for Mom who was unfamiliar with it, and we proceeded to gab.

And then the above hamachi came out and I tasted it. It was joltingly good. What? I wasn’t expecting this. Horseradish. Hamachi and horseradish? So utterly simple, so surprisingly good. Such an imaginative pairing.

“Excuse me,” I asked Caroline, one of the attendants floating gracefully around us. “Who’s the chef?” None of the press seemed to have mentioned who it was.

“He was at Eleven Madison Park.”

Ahhh, I thought. OK, the hamachi was not a fluke. (Sorry.) Here is a bar, restaurant, and dining club that will have some serious culinary chops, and I hope those running the place will take very good care of the kitchen staff, led by the affable Julian, and his chef de cuisine Morgan Schofield. They were always bouncing ideas off each other, Julian said, so it’s clear I must credit both for the ingenious simplicity of fresh grated horseradish on hamachi (with peaches marinated in white balsamic, olive oil, and salt to finish it off). 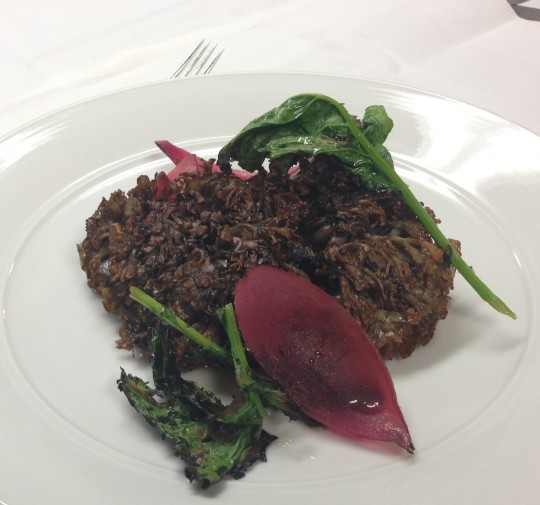 Hen of the woods mushrooms with grilled broccoli rabe.

They had received immaculate hen of the woods mushrooms and rightly featured them as a kind of “steak." And we were offered the first white truffles of the season they'd received ($85 surcharge, Caroline noted; thank you, I hate having to ask) and as it was my b-day night with Ma, and Ma was picking up the ticket, absolutely! Rain white truffle! Perfect on perfect, pillowy light gnocchi.

So here’s what I loved: the incredibly simple gougères were lovely; if you can't do simple perfectly, you’re in trouble. I already mentioned the horseradish (“there is genius in simplicity”). The mushrooms: the kitchen featured what was special about them, the meaty texture and earthy flavor; the dish wasn’t much to look at, as you can see, but in this case looks were beside the point because they were so good; the kitchen had put its work into the service of the mushrooms, roasting them with butter and thyme, bay and garlic. And last, gnocchi, which aren’t so simple, often they are dough-ball sinkers (the key is to cut the dough as for biscuits to avoid overworking the flour, Chef explained). These were light and flavorful. And well, white truffle is white truffle, one of those gift-of-god foods that I will never turn down.

People often ask me if I ever think of opening my own restaurant, to which I always reply, “Are you fucking kidding me?” And so it is always with best wishes and admiration that I approach any new restaurant, no matter what kind and no matter its ambitions.

So it is with special high hopes that the very charming and genuine Omar Hernandez and those financing this auspicious new venture give this talented kitchen free rein.