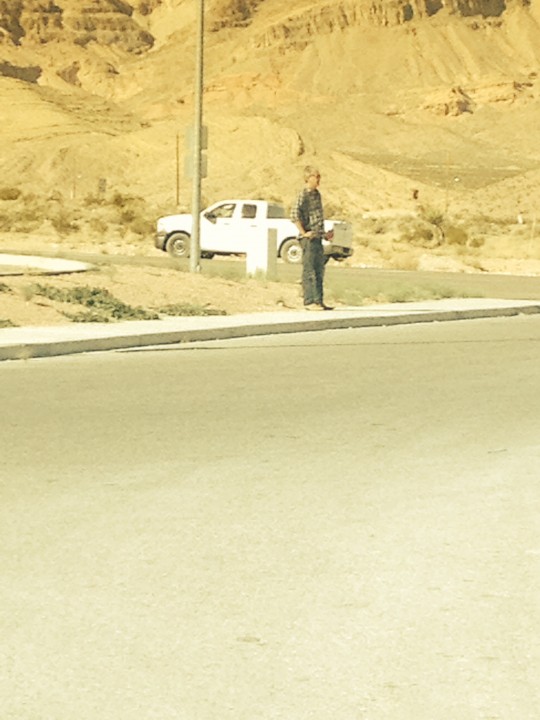 Bourdain on time at the agreed on pick-up spot. Photo by iphone.

Bourdain is waiting at the appointed rendezvous in the Nevada dessert. I'm in a 1970 Olds Cutlass "acquired" for me by a Vegas associate. I didn't ask questions. Bourdain against the arid landscape is a sight that fills me with a mixture of excitement and fear (but not loathing). He and the intrepid Zero Point Zero production team have brought me here to help Tony explore different sides of this morass of humanity—more precisely, those who serve that morass. But Bourdain has a penchant for getting me into trouble. Carol Blymire texted that she has bail money ready, say the word. Remember, I had to make a quick getaway in the "No Reservations" Las Vegas episode, for those who missed that one.

But Tony's here to explore different sides of Vegas, ones less often covered. I type this from one of the major hotel's villas, so large we've just discovered Colonel Mustard in the observatory holding a lead pipe. A place so secretive that when I tried to order room service, they didn't know where the villa was or how to get the BLT to me. All the while it looks over the central swimming pool. I'm clearly in the land of the .01 percent.

Bourdain's show on CNN, "Parts Unknown," is an increasingly ambitious and thrilling travel show, anchored by the food of a culture, and addressing serious issues of that locale. If you haven't seen the African episodes, my favorites, I highly recommend buying on iTunes or where you can find them. Listening to the Libyan rebel describe how he would locate, via Google maps, the coordinates of the buildings from which the Libyan military was picking off civilians, then tweet those coordinates so that NATO forces would see the tweets and bomb the precise spot, within view of the man sending out those tweets—gives you a true sense of the power of so much easily shared global information. The Congo episode, South Africa, and, more recently, the controversial Tokyo underbelly episode are all worth your time.

And during some downtime in the villa, I had a chance to sit down and talk with Tony about the issues I care about so much, food and its production, distribution, and consumption, and what it means to this country. Questions such as what is a chef's responsibility to sustainable and local food purchases, and how we can ask people, especially people struggling financially, to not buy the cheapest food for some ultimately intangible result?

More of this to come when I've had time to make sense of my notes. But now gotta run—it's time for some Texas Hold 'Em.

More to come, that is, if I don't cross The Man and find myself digging a hole in the desert. It's a mighty big desert out there.