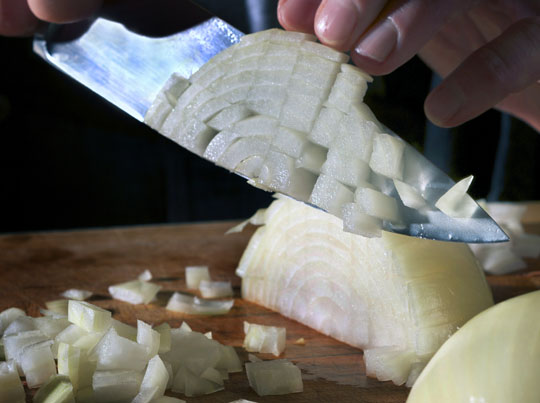 Here's the fact: the biggest problem in home kitchens is dull knives. There is no greater hindrance to the person in the house who does the cooking than dull knives. Almost without fail, every friend's kitchen I go to, there is not a sharp knife to be found. The only kitchens I've been in where there are sharp knives, are the big fancy ones where no one cooks. And my mom's. Because she only uses those crappy ceramic knives, so her nice Wusthofs, used on my once- or twice-a-year visits remain pristine. (OpenSky has a great deal on the higher end Ikon series which I adore.)

So this post is simply to clarify what is rarely stated on cooking shows, in magazines, in the recipe columns of your newspaper.  If you want to make cooking easier and safer, use very sharp knives and learn how use a steel (it takes practice—start slowly, you don't have to do it fast like a show-offy chef).  It only takes five seconds.  When you use a dull knife, you tend to have to press harder on what you're cutting, which results in slippage and ragged cuts (nick yourself with a sharp knife and the wound is back together by the end of the day; unless you remove an entire digit, of course).

Look at the photo above. A dull knife will smash through the onion cell walls rather than slice through them, losing more juices, so it's arguable that a sharp knife actually results in better tasting food.

Bottom line: there are enough frustrations in the kitchen. Don't compound them by using a knife that can't slip through the skin of an old tomato. If you want to enjoy cooking more, get your knives sharpened.  More important: if the person you love is doing the cooking, sharpen their knives.

I've said it before and I'll say it again.  If your sweetheart is the cook, take advantage of this fact: Nothing, nothing, says I love you like a really sharp knife.

Not to a cook, anyway.

Update: Got this comment from "Former Butcher" and wanted to call attention to it (it's also a great example of why I love and encourage all comments):

For me, this is the issue : Do I want to put a sharp knife in the hands of the average home cook? I used to preach the virtues of using a sharp knife to anyone who asked or showed interest in knives, and how learning to properly sharpen a knife is indispensable in the kitchen. But it's not just the sharpness of the knife, but also proper knife skills and handling. How to hold the knife, how to hold the food being cut, what motions to us. These are skills that must be learned along with keeping one's knife razor sharp.

I'm embedding a quick How To demo below which Donna shot with my iPhone, but I also show how to steel a knife; they're both important skills. (This particular sharpening tool has two sides, a fine and an extra fine; to keep the video short, I only showed six swipes on each side of the blade on extra fine to finish it.) I found an awesome wet grind service in Cleveland (Ambrose Antiques on Prospect across from Convocation Center.) where I paid for it, and it was worth every penny. Now I have a cool new "stone" that OpenSky sourced and that I love (not only is it dusted with uniform diamond particles, it's perforated, an old patent that DMT took over, works astonishingly well). I just received an email from Andrew--yesterday's special discount on them sold out in hours but I've just learned they're working with DMT to release a few more today at the same price. Regardless how you get the knives sharp, a proper service (please don't take them to your hardware store; they can sharpen lawnmower blades, but not knives), or your own stone, get them sharp. Keep them sharp.

How To Sharpen and Steel a Knife:

If you liked this post on knife sharpening, check out these other links: