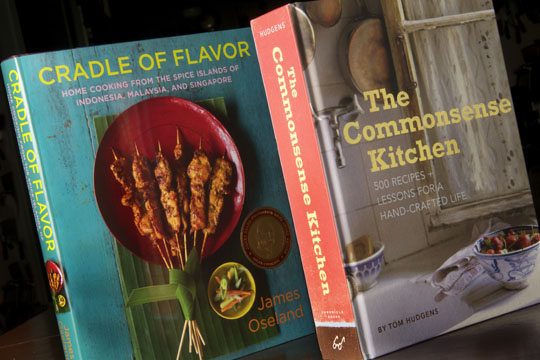 How to write a Cookbook. Photo by Donna Turner Ruhlman

Two weeks ago, sparked by Dianne Jacobs's question about what defines a successful cookbook, I wrote this post So You Want to Write a Cookbook. But the questions raised intrigued me so much that I reached out to two editors I currently work with and respect, asking them specifically, what books that didn't sell well or make money do you consider to be successful and why. Maria Guarnaschelli responded at length and reached well beyond the question (if her name sounds familiar to you, it may owe to the fact that her daughter Alex, is the chef at NYC's Butter and a Food Network regular). Her thoughts and decision-making process are a must-read for anyone writing cookbooks, and certainly for anyone who wants to. The following—as well Lorena Jones's comments, which follow Maria's—were conducted via email:

What is a successful cookbook?

Maria Guarnaschelli: One that adds something new to the existing literature on the subject, even if it doesn’t sell (make money for the company and earn back its advance). I published two Japanese cookbooks by Elzabeth Andoh in the 80's and they had to be remaindered. No one was cooking Japanese food at the time, but the books were first rate and valuable resources for all interested cooks. I have also published here at Norton Cradle of Flavor, one of my favorite cookbooks, by Jim Oseland at Saveur, but there is not enough interest in the food of Malaysia , Singapore and Indonesia to support even modest sales. The book won two awards and is still in print, but I have always wished the sales were stronger. I also published a memoir by Fuchsia Dunlop, Shark's Fin and Sichuan Pepper, which sells modestly (and won an award) but it has not reached a wide audience. The author has since been asked by the New Yorker to be a contributor but sales are small.

Obviously I would not have a job if I published too many books that don’t make money for the company. But books like the ones I mentioned above are a source of great pride to me. They have contributed original scholarship to the food community and make me feel as if my work is valuable.

Books that are of the same caliber but make money are of course what make my role as an editor important to my employer. Rick Bayless’s Mexican Everyday and Fiesta at Rick's are excellent books and the most authoritative in the field. They sell and backlist (continue to sell every year) to Rick’s ever growing audience. Charcuterie by you and Brian Polcyn is hugely successful and has the advantage of being a surprise bestseller. When that book was published there was not a lot of interest in the subject but you two discovered an audience in America that had been untapped, and you, Michael, have been ingenious in keeping interest high on the internet.  [M.R. would like to add Kathy Barrow and Kim Foster to this list!]

What I can say about my taste is that I don’t tend to sign up books that only give recipes. I want the author’s ideas on technique, culture, and ingredients. I have published two cookbooks by Fuchsia Dunlop (Land of Plenty and The Revolutionary Chinese Cookbook) which continue to backlist because the recipes are set in the context of the region and provide extensive information on methods Americans may not be familiar with. The author speaks fluent Mandarin and has studied in Chengdu . That’s another thing, I like it when an author has immersed him or herself in a subject. I have an extraordinary book coming out this fall by Maricel Presilla, a book on the food of Latin America , and the result of more than 30 years research.

Another book I published, Love Soup by Anna Thomas, represents a successful back and forth between and author and her audience. Her first book The Vegetarian Epicure was published in the 70s continue to sell, and the success of Love Soup shows how Anna has continued to respond to what her audience wants and needs. Norton published Love Soup in 2009 and it won a Beard award.

When a proposal lands on your desk, what are you most hoping to find?

M.G.: I just acquired a cookbook bought on a fabulous proposal, SEOUL FOOD by Hooni Kim, a Korean American. He owns a very successful yet tiny restaurant (Danji) in Manhattan that has earned already a Michelin star. The proposal was written by Ann Volkwein, a very skilled co-author who knows how to popularize complex ideas and a foreign (to Americans) cuisine, having co-authored many successful books, including Guy Fieri’s books. Hooni did his undergraduate work at Berkeley and finished 3 ½ years of medical school, took a break (he was always getting migraines) and went to the French Culinary Institute. And he was hooked on becoming a chef.

The proposal made it seem as if the making of Korean food at home was as easy as making Italian food. And he has already the makings of a successful platform: a large base of followers on Twitter, good word of mouth about his restaurant, and a winning personality. He also was sent to Korea every summer by his parents and goes frequently to find what’s new and to keep up his language skills. Plus, he serves contemporary riffs on Korean food as well as the traditional dishes. This told me that his book would stand apart from other books on the subject because of this element.

It’s difficult to say what makes me want to buy a proposal. Your proposal on Charcuterie made a strong case for a craft I didn’t know there was an audience for, you had a significant profile in the field, the pages you submitted contained many specific details on what the book would feature, enabling me to get a sense of the book, and the voice (very important) in the proposal was strong and exciting – as well as authoritative. I was persuaded by a very short prospectus. Finally your writing was superb.

I suppose I should say that I have to have a sense that there is a market for the proposals I acquire, even ones (markets) that I might not be aware of. If the author(s) have made a convincing case, it gets me revved up that I will be learning something new.

What are the most common reasons you turn a proposal down?

M.G.: Too many other books like it, without anything that sets the book apart. Lack of a platform of any kind.

[By platform, publishers mean some kind of promotional platform, whether TV show, restaurant, strong social media or an existing audience from previous books, preferably more than one of these—M.R.]

M.G.: I think it’s important for me to mention that I try to keep up with what I think are important trends in the field: I have signed J.Kenji Lopez-Alt’s magnificently creative book of recipes that link science to everyday cooking. He has also created a mammoth following of his work via The Food Lab. His book is long awaited.

And I signed Dave Arnold, a science and technology professor at the French Culinary Institute. He is writing a book on cocktails and he has a bar attached to Momofuku called Booker and Dax. He has broken new ground in the field of Cocktails.

I also queried Lorena Jones, publishing director food/drink/lifestyle/digital books for the past two years at Chronicle Books, which published Ruhlman's Twenty (back in stock 3/19, promise!).

What's a cookbook you've worked on that you feel is successful but was not a commercial success?

Lorena Jones: If I had to pick one book from the recent publishing that I do connect with as an editor that hasn't been a critical or commercial success, I'd say it's the Commonsense Kitchen, which has an intriguing backstory: it's born of an off-the-grid, alternative graduate school called Deep Springs in remote Nevada where a very small group of students live, work and learn together. (David Tanis was a student there.) The book is written by its past director, Tom Hudgens, and is essentially a manual for self-sufficiency in all aspects of running a kitchen. It's a thoughtful, lovingly written ode to the waste-not, want-not maxim that country cooks and professionally trained chefs know, but that most American cooks never grasp. And it explains much about cooking from scratch, imparting the wisdom of generations of farmhouse cooks, gardeners, dairymen, and butchers. I like this book's quiet style. It is the way of (real) country people. Deep knowledge delivered without fanfare. But that doesn't sell books.

What do you look for in a cookbook proposal?

L.J.: What I want in a proposal, and I believe this is a bellwether of great nonfiction books, is above all, original, authoritative, personal, passionate, information-rich writing. I don't care how small the subject—if the author is an original thinker with an ability to express his or her exploration and discoveries in original writing, the text will have a unique "voice" and will attract curious, discriminating readers. Knowing that only 10% of the population buys books, and knowing that this 10% is by definition discerning, we can expect that readership to require authors' texts to tell them something they don't know (or know well enough) in a way they haven't been told before. Publishing to that requirement should be our main objective.

I want to know an author understands and will undertake self-marketing, but I do not want a proposal about marketing. Good books are based on good content. No amount of terrific marketing can make a book excellent. And truly excellent books are lasting, which should (in my opinion) be another requirement of print publishing.

Lastly, I want to know an author is genuinely interested in collaborating. The publisher (editor) has to earn the right to collaborate on each and every book, but assuming we will earn it, we want to know the author wants the same thing we want—a book that reflects the author's work in the absolute best-crafted way, which is not achieved in a vacuum.

For me, and every hands-on editor I know, I think that sums up the key indicators we're hoping to find in the best proposals.

Many thanks to these two editors for their time. I hope you'll check out their books, especially the two pictured above as successful books that didn't have strong sales: that means something.

If you liked this post on How to Write a Cookbook Part II, check out these other links: