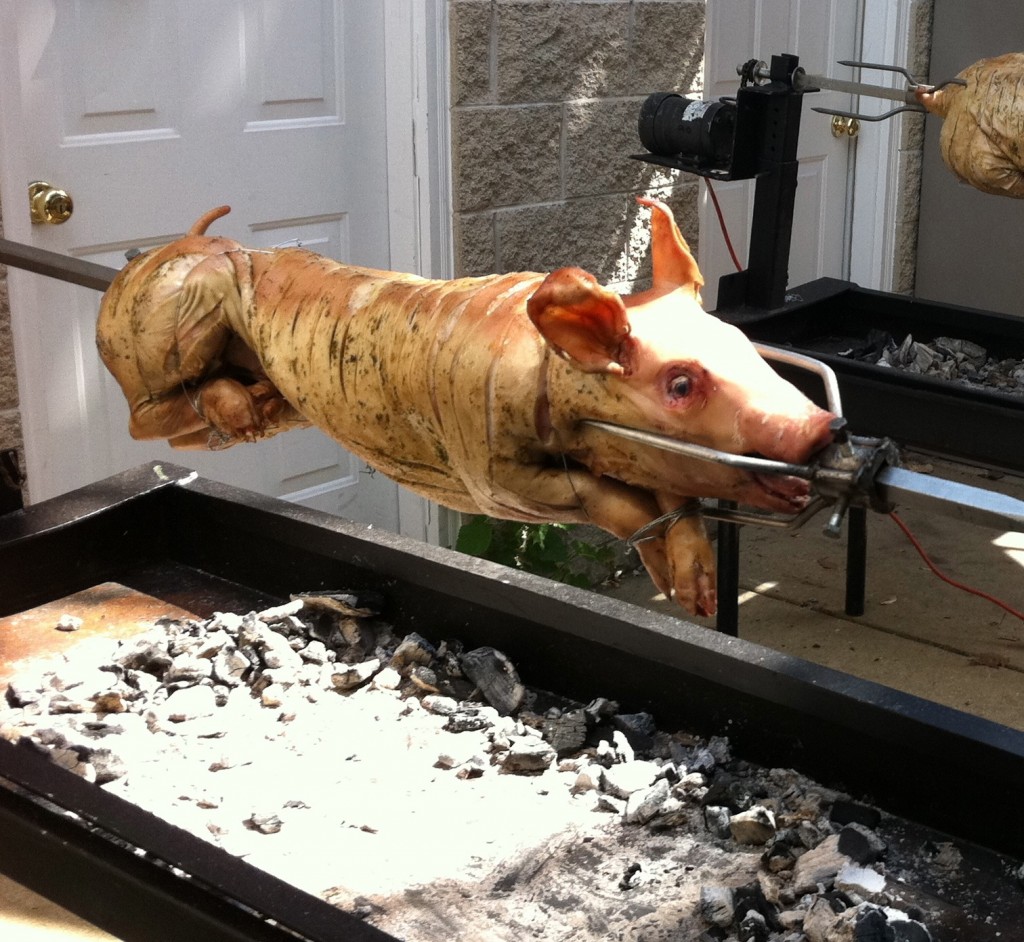 The start of the pig roast. Photo by Joshua Kulp

Chefs Christine Cikowski and Joshua Kulp, among the growing legions who are making our food better and helping us to appreciate it more, call their moveable feast Sunday Dinner Club because it evoked a time when their families shared a long meal together.  Sharing meals with the people you love is far more important than I'd ever realized, a fact that deepens the more I cook, read, and listen to other cooks, both home cooks and professionals.  I love that spirit.

Sunday Dinner Club is an unusual Chicago-based business created in 2004.  What the chefs do is host dinner parties in their home and invite people on their mailing list to attend. The mailing list has been cultivated over the last six years by referral only which means that everyone that comes to the dinner club is connected in some way to them or another diner. The dinners are multi-course feasts, featuring the best of what is available from the good local and sustainable Midwest farmers at their fair city's markets. The food they cook is the food they love to eat—seasonal, simple, clean, refined and thoughtfully prepared. They can also be found grilling fresh-ground burgers at Chicago’s Green City Market on Saturdays and catering smallish food-focused events—like whole pig roast parties for their friend, brewmaster Greg Hall, on Bastille Day.  The following post tracks how they thought about the pig roast, and how they went about it. Thanks Christine and Joshua for sharing your whole-animal know-how! —M.R.

by Christine Cikowski and Joshua Kulp

Gunthorp Farms, our source for responsible and tasty pork, usually delivers to us sometime after midnight. We had ordered two 40 pounders for Greg’s Bastille Day party. When we pried open the walk in, they were hard to miss - two clear-eyed piglets, slaughtered just the day before.

The plan was to spit roast them whole, in celebration of both the holiday and the pig. We chose small pigs as they are simpler to manage and have great collagen that when slowly melted results in succulent meat. Our first step was to set the pig in a position similar to the one it would ultimately be roasted in. In this case, we took the advice of Hugh Fearnley-Whittingstall (British food writer of the River Cottage books series) and wrested the pigs into what he refers to as “laying dog” position. You will never look at Fido the same way again, but this position, especially with a small pig, helps even out the thickness of the animal and provides for a great presentation. Simply tuck the rear legs under the belly and bring the front legs under the head.

Next, we had to decide whether to brine, rub, marinate, or to leave the little guys alone.  Deciding that our beautiful piglets had been through enough, we opted to do very little.  48 hours before roasting, we made a puree of salt, pepper, orange peel, fennel fronds, fennel pollen, olive oil and garlic.  We love orange and pig and we’ve had transformational experiences with fennel rubbed porchetta.

Before rubbing down the pig with our puree, we had to prepare the skin.  We had two goals in mind – effectively getting the marinade to infuse the meat and creating the ideal conditions for crackling, crunchy skin.  We scored the skin with the best tool for the job – an adjustable box cutter or utility knife.  On a small pig this can be a very delicate job, the skin is still quite thin and the fat layer below is not fully realized. We scored the skin in parallel lines, about an inch apart, perpendicular to the spine from head to tail.  We then worked the marinade into all the crevices created by scoring as well as inside the pig.

When pig roast day arrived we pulled our pigs out of the cooler first thing in the morning. We wanted the pig at near room temperature before roasting to ensure even results and to save some time on the spit. We used a Big John Charcoal Rotisserie.

Wiring the pigs to the spit took close to an hour.  First, we ran the main skewer through the bottom of the pig, along under the spine and out the mouth – trying to use the natural holes the pigs came with, so as to avoid puncturing tasty meat.  Second, we secured the pigs to the spit so that it would not spin or flip while rotating.  We chose to use some heavy duty, but thin gauge wire to do the job. We started by wiring the legs together to keep them from swinging free. Then we carefully threaded wire in a loop through the back, around the spine, and under the skewer and twisted the wire tight to keep the pig in place. We tied the spine to the skewer in three places, near the rear, the center and the head.  This did the trick and we ran a couple of tests to ensure the stability of the pig.

Pig scored, rubbed, secured – time to roast!  We lit a fire using natural lump wood charcoal. Once the flames died down in the chimney, we set the pig into place on the spit and poured the coals. We carefully set up our fire underneath the pig.  Wanting to avoid having hot coal directly below the animal, as drippings might flare up and direct heat would leave the outside cooked faster than the inside, we placed foil pans underneath the pig itself, to delineate the area without coals and to catch any drippings. 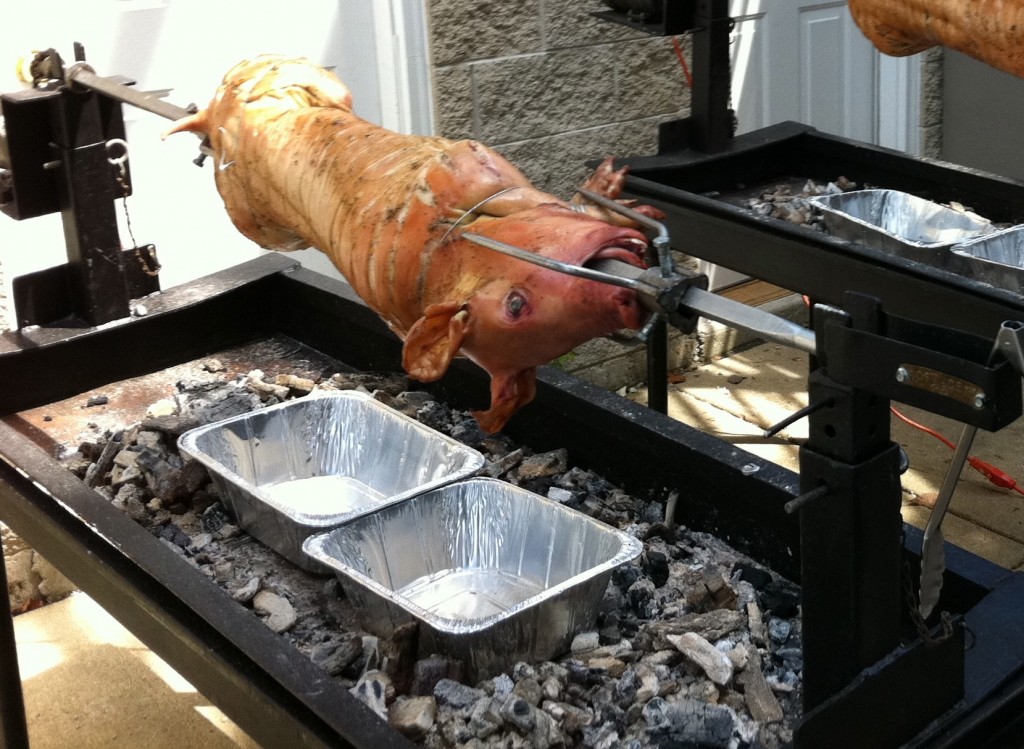 The pig turning on the spit. Photo by Joshua Kulp

We did this for about 9 hours. Patience is a virtue. Every 30 minutes or so we rotated the pig 45 degrees. Slow and even is the mantra. We made sure to pile the coals a little fuller near the front and back of the pig as the shoulders and hams take a little more fuel to cook through than the mid section belly and loin. We plowed through about 150 pounds of charcoal over 8 hours for each pig, keeping a couple of chimneys full of fuel the entire day.

We started checking temps after several hours and brought our pigs up to about 145 degrees. Then the real fun started - cracklings!  We pulled the foil pans and arranged the hot coals directly under the pig.  We dumped some extra freshly lit coal right under the pigs and immediately the skin began rendering fat and bubbling. As soon as the skin bubbled up, we rotated the pigs a little to get the next section working and kept rotating until the pigs were covered in crunchy cracklings. We then pulled the pigs off the spits and found a nice table to let them rest. 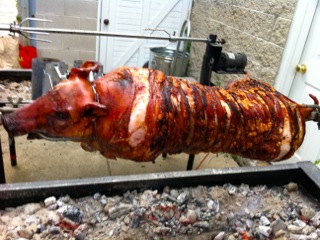 The pig is nearly done roasting on the spit. Photo by Joshua Kulp

Resting let the juices settle and allowed the meat to relax. We carefully slid the pig from the skewer and used wire cutters to cut and remove all wires. Once rested, we removed the hams, the shoulders, the loins, the belly, the cheeks and set to work slicing the meat and chopping the cracklings.

A pig roast is a ton of work, but working with a whole animal truly allowed us to connect with our food. And those were some tasty pigs - a great combo of smoke, pork fat, crunchy skin and hints of fennel and garlic. 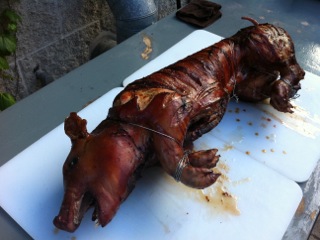 The pig is cooked wonderfully and ready to serve. Photo by Joshua Kulp

Serves 20-30 as part of a Pig Roast with accompaniments

If you liked this post on suckling roasted pig, check out these other links: