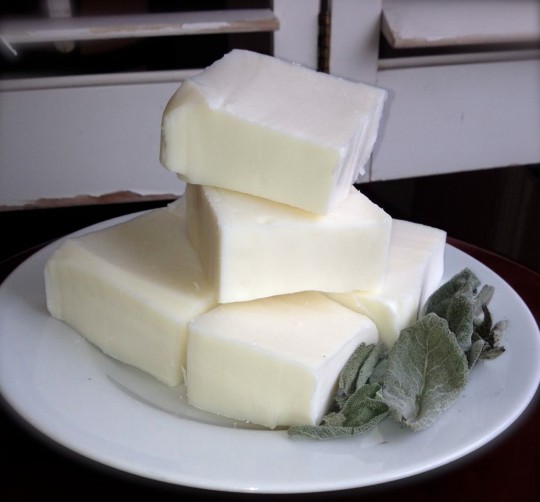 Soap made from scratch. Photo by my iPhone.

How this workaholic longs for the holidays to be over! Especially when the big days fall midweek, effectively knocking out two full weeks. I tried not working—reading, watching movies—but that just resulted in flatness. I need to work, writing or cooking, apparently the way a shark needs to swim.

This week is time to think ahead toward what I hope to accomplish in 2014. I’ve already achieved one goal, small though it was. A few friends and I bought and broke down a pig in December (will post about this soon) and it was exceptionally fatty, leaving us with far more rendered lard than I need to cook with. How to use all this fat? Make soap. To my amazement, it was a breeze and finished in 30 minutes. Though there’s relatively little on the internet, this site provided ratios! Hard to know who this source is, but the ratio worked like a dream, considerably less water than other internet recipes.

This was really important to me because part of my goal was to waste as little of the pig as possible, and this is a lovely neutral soap that leaves the skin feeling moisturized after using.

As 2014 begins I’d like thank all those people who join me and help me in my work: my assistant Emilia Juocys; copyeditor Karen Wise; Little, Brown editor Michael Sand; David and Joleen Hughes of Level Design; Stephen Jenkins, the man behind my website; Ann and Richard Lagravenese and Robin Skye; Will Turnage; Laura Yorke; Lisa, Cait, Adam, Vanessa, and so many others at CAA; Will Copenhaver at Le Creuset, David Mulvaney (the scale); April Clark (the Schmaltz app); Mac Dalton (our tools); and last and most important by far, my wonderful wife, Donna, without whom I couldn’t do half of this.

Now, about the above soap, comments and, especially, questions for people who actually know something about this.

For instance, I’m told that it needs to cure, presumably to get the rest of the water out. But the soap above is lovely and useable as is, 24 hours after making it. I intend to wrap and freeze some now (my only concern is rancidity), let some cure, and use some daily. Can anyone advise about the purpose of curing?

I steeped dried sage leaves from the garden in the oil then strained them out because I feared too piggy a smell, but there’s little sage scent and little smell; it’s actually a lovely, clean, neutral-smelling soap and leaves the hands feeling soft. I'm told you can add essential oils for fragrance, but I really like this unscented, no-nonsense version.

Again, I used straight rendered pig fat, lye, and water, nothing else. Worked like a charm. Here's a source for food-grade lye (don't be afraid of it, just be careful; I don't use gloves or goggles and I'm fine). When you aren't using it for soap, use it to make great pretzels or cure olives!