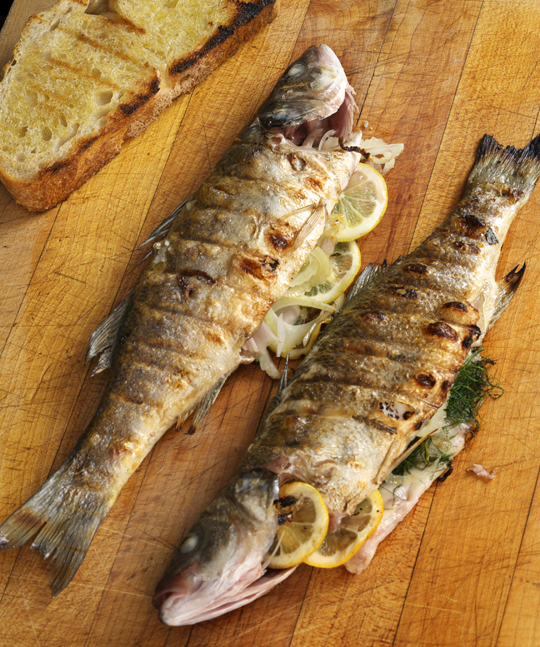 A confession: I'm not a great cooker of fish.  In fact, Donna hates it when I cook fish, because I usually want to put some kind of fancy sauce on it.  She wants it sauteed with plain lemon, a little butter maybe.  (Yawn.) But she's usually right—I don't cook it enough to get good at it.  But another part of the reason I'm fish challenged is that I grew up in Cleveland in the 1970s where fish came into the grocery store on Monday (trucked in, no doubt) and sat around through Saturday, which was the only time in Cleveland you could get a good sense of what low tide smells like.  The only fish I ate, and ate grudgingly, was breaded, fried, frozen, and reheated in a toaster oven, and I was able to get it down only with a stiff shot of tartar sauce.

When I found myself working grill station in St. Andrews I grilled salmon, and at the first pickup the chef made sure I served the gray, fatty sided down the next time.  Grill station at Sans Souci a couple years later, I grilled steaks, lamb chops, salmon and halibut.  Salmon is a decent fish to grill, but the halibut was a bitch because if you weren't constantly throwing logs into the fire, which, frequently in the weeds, I would neglect to do, the fish would stick and really screw up my night. You can grill cod, and it's very tasty, but it really wants to stick, too, and it gets so flaky that it's really hard to grill without it falling apart and becoming a mess.

But: whole fish—whole, single-portion, skin-on, bone-in fish—are awesome on the grill, and very very easy to cook.  Most important, they give the fish-challenged cook such as myself, a big window for doneness.  Fish fillets have to be cooked on the money—they go from perfect to over cooked very quickly.  Whole, skin-on fish have their bones to flavor the meat and keep it moist, and the skin protects the delicate flesh.  This is what makes trout a great fish to grill.

Branzini may be the best.  Why? Because of its bones.  They're high in cartilage, meaning, that when the flesh gets hot, instead of over heating and drying out, it melts the cartilage so that the flesh stays succulent long after the fish has hit the right temperature. (The fish may be more universally known as European sea bass, but with all the different bass out there, I favor a distinctive name, so branzini it is.  Ours were from Whole Foods, farm-raised to WF standards in Greece, and cost less than $9 each.)

The fish above sat around for many minutes (a maddening length of time to hungry me) while Donna made sure she got shots she liked.  By the time we finally sat down to lunch (sauteed fennel and zucchini, kept warm in a saute pan on the grill, grilled sourdough and cold white wine), the flesh had stayed amazingly juicy.

Donna, who usually simply says while eating such a meal, "Michael, just admit it, you can't cook fish," actually swooned.  She could not believe it.  Even the skin, charred and crispy, was delicious.  "I told you you were going to like this," I said.  She shook her head and swooned some more.  God, it makes me happy when she loves something so much.

The basics: have your fish monger remove guts and gills, scale it, and snip off the pectoral fins (or do it yourself). Stuff the fish with flavorful aromatics.  Build a super hot fire and make sure you let the grate itself get really hot.  Rub your fish with oil, oil your grill, and press the fish gently down on the grate so it sears (don't move it, let cook so that it doesn't stick).  I did these about four minutes a side, covering the grill for half the time to make sure the aromats heated through (they flavor the meat and their moisture also helps to keep the fish from overcooking).

So, in the end the first lesson in how to grill fish is how to choose which fish to grill. 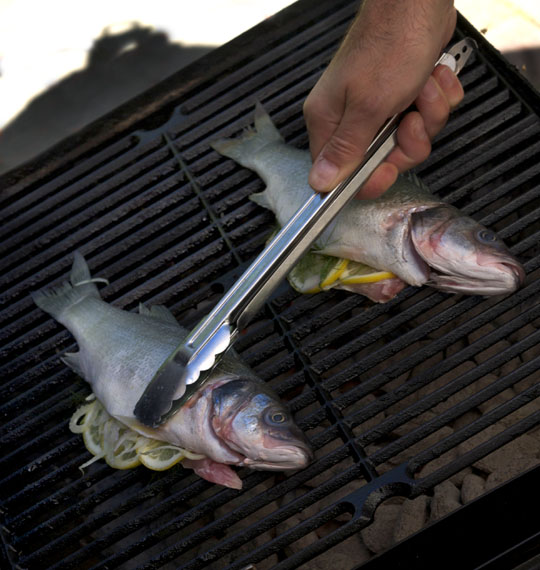 Previous Post: « Don't Be Lazy When Making A Photo—And Fixing It When You Are.
Next Post: The Best Garlic »