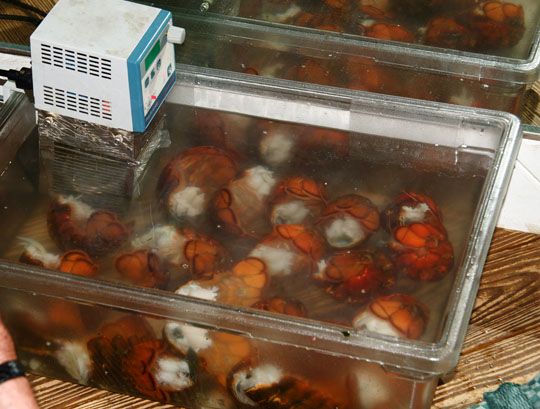 Lobster tails were cooked at 140˚F/60˚C for one hour; claws were boiled on stove top; bodies saved for stock that would become a lobster bisque two days later

The mission was this. Make nine great dinners for a big group, but create menues simple enough so that I could get a morning's worth of work in (ie justify 10 days in Key West) and not freak out at 4 pm. One of the first issues is what to cook food in, the vessels. So a valuable tool was the above Lexan tub which I borrowed from my friendly neighborhood restaurant, Fire (thanks Doug!); the immersion circulator was a huge help (I need to do a post on what lessons from this device that apply to home kitchens without one). I also had two huge pots for boiling green vegetables.  After making sure I'd have the right tools, I planned the main proteins, a few of which I either made in advance or ordered. Pork belly confit, duck confit, North Carolina BBQ, a slab of guanciale, lobsters, mussels.  When I arrived I bought double what I needed of steak and chicken; the leftovers would provide lunches for the sailing team in addition to dinner. I bought all the chicken the first day, breaking them down and using backs and wing tips to make stock and rendering the fat to use for cooking throughout the week.

One of the main problems people at home have cooking for a lot of people is not knowing all that you can do in advance. When you're planning a big dinner party, choose a main course that can be done well in advance (see above confits, BBQ, or any braised dish). Make it a week ahead and make enough so that you can serve it to family for dinner. Green vegetables can be cooked and shocked as much as a day in advance. Starches can be cooked a few hours ahead and kept warm. Anything that won't be cooked, such as all the components for the fish tacos below, can be prepared hours in advance. Big proteins can be cooked/flavored on the grill then brought slowly to the right temperature in a low oven while you finish other components of the meal. When you're well-prepared, cooking for a lot of people is fun and even relaxing. Why people choose dinner party meals that require everything to be cooked at the same time right before eating mystifies me. 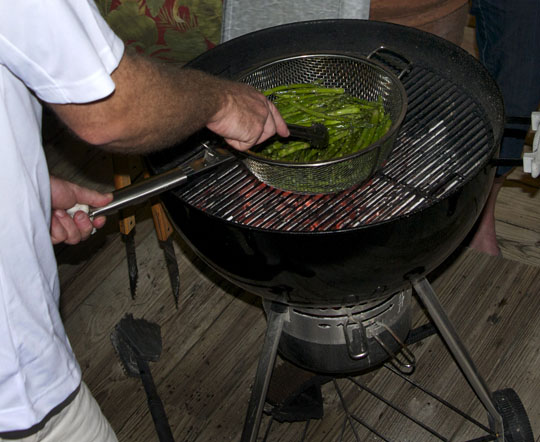 Pre-cooked vegetables can be tossed with oil and garlic and reheated over the grill while the meat rests.

Being organized is the most important tool when cooking for a lot of people. I usually made a prep list for the day's work, a shopping list, and a cooking prep list including a timeline for time-specific preparations, when to start the fire, when to drop the eggs into the water bath, etc. That way, with a few helping hands, you can cook a great meal, and enjoy yourself. You can't sit back in a lounger and swill rum, but you don't want to do that anyway, you want to cook, because that's what you do and because that's what's so satisfying.

A note about portions. For protein, figure it out by weight. Because there were plenty of sides, I usually bought a quarter pound of each meat/fish per person, erring on the generous side. A pound of pasta will serve 6 to 8. I used a quarter cup of rice per person. Same measure for beans. I always made too much salad so I'm no help there. The bigger the group, the less people seem to eat, per person, for some reason.

The following is the menu with notes on what worked well.

NOTES: Extra flavor came from chicken fat, chicken cracklins, and chicken stock, made from the trim of what would be tomorrow's main course.

NOTES: Made the scrapple ahead of time out of leftovers; cooked the beans in the afternoon, twice baked potatoes could be cooked and prepared an hour or two before dinner, then reheated. Can't cook 14 chicken halves at once, so chicken all started on the Weber then finished in the oven (space was an issue that night with trays of chicken and trays of potatoes that needed to be in oven; I should have done a stovetop starch, but I really love chicken and baked potatoes).

NOTES: I ordered twelve 1.5-inch strips; what I got was twelve 3-inch strips. Really nice, and all the extra turned out to be good, but the trick was to cook them perfectly. They were too thick to cook all the way through over high heat—the exterior ½ inch would be well done by time interior was warm. So we seared them well on all sides, then put them in a 200 degree oven till they hit 125 interior temp. Worked great. Same concept as sous vide, just a little less precise.

NOTES: Made pork ahead of time and brought with me (straight out of Twenty), brought lots of guanciale.

NOTES: Again, the duck was cooked ahead (I cheated and bought from Hudson Valley Foie Gras when I couldn't find legs in Cleveland (and at $5/leg, a great deal). Of course more people than expected showed up that night so I also cooked the duck bacon and instead of getting whole legs a quarter of the folks got shredded confit. I grilled two magret duck breasts, to supplement all plates. I reheated the duck and cooked the eggs in the Lexan, broiled the duck to crisp the skin.

NOTES: After consulting with Alex Talbott of Ideas in Food (read their fabulous lobster post), decided on 140 degrees for one hour for the lobster tail, boiled the claws. After dinner a couple of us cracked all shells and got all the knuckles for plenty of meat for Donna's great bisque two days later. I'd seasoned and sealed the short ribs for Friday night in Ziploc vacuum seal bags in the afternoon. We dropped those after dinner into the 140 degree water.

NOTES: I'd never cooked this powerful swimmer before and it was a big fat filet, more like a tenderloin. The concern would be overcooking. I sealed it in a bag and put it in the water bath with the short ribs for 45 minutes and Jim finished in on the grill. Perfect.  Just cooked through and still juicy.

NOTES: I planned something really easy for the last night since I wanted to spend the day with Donna. At dinner, we simply took the ribs out of their bags after 48 hours in 140 degree water, slathered them with Bone Sucking Sauce and grilled them, a fabulous easy main course. I made lobster stock the day before with Donna so it was nothing for donna to season, thicken it into an amazing bisque, with those huge chunks of lobster.

Now we're in Cleveland in the depths of cold dreary weather. Time to start braising and roasting...

If you liked this post on Large Group Cookery, check out these other links: